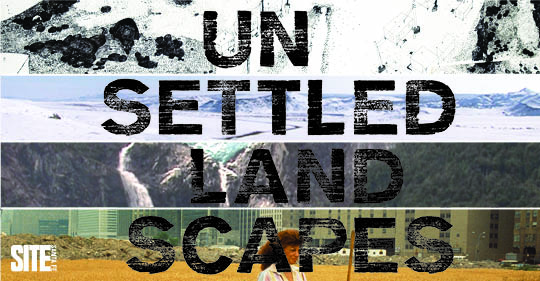 In Unsettled Landscapes, all seemed still at first. But slowly the regulated sonic fill of the exhibition became noticeable, edging around the hum of the large, ceiling-mounted Reznor heaters, the chime whenever someone entered or left the building, or the opening and shutting of the heavy door to the back of the building—the percussive elements of SITE that each show’s individual work falls in time around.
On a quiet day, winding compositions would escape from carefully mounted headphones and across the gallery—an accompaniment to  Adriana Bustos’ hypnotic videos of cocaine dissolution. Booming, opaque sounds and the fill of Brazilian Portuguese served as a reminder of Melanie Smith’s carpeted installation and trek down the Amazon. Softly thudding cardboard chips and cards falling on felt might suggest an overheard fortune from Nuevo Romancero Nuevomexicano, or mix together with the whirr of a motorboat off the coast of Chile in one of Gianfranco Foschino’s works.
The regulated whirring, and dissonant, crackling recordings of the massive projector employed by Charles Stankeivich eventually subsided into an unanticipated squeaking, before disappearing altogether.
Among the echo of so many different foot steps would emerge the rustle of a paper tree at the front of the exhibition, an exclamation—and sometimes, in the aftermath, a certain silent awe.