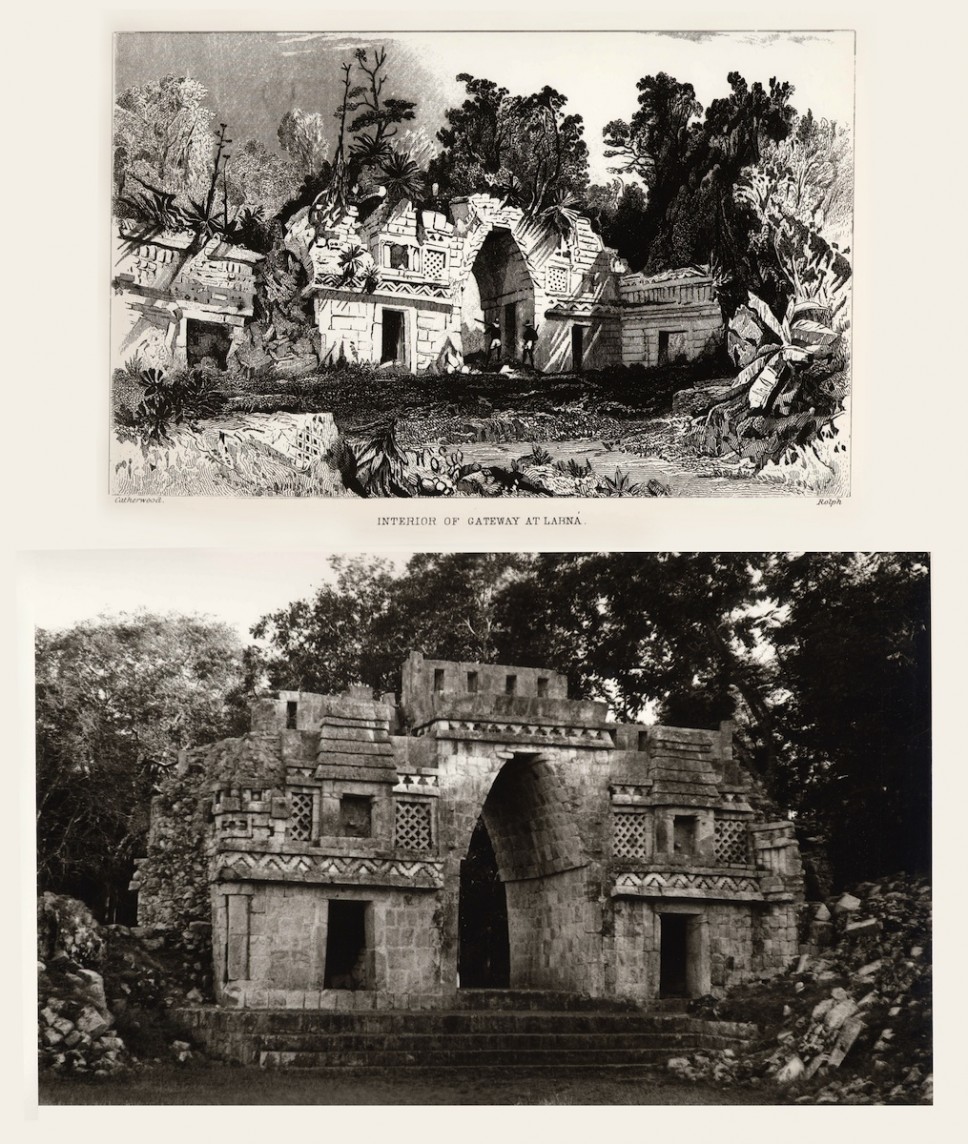 Leandro Katz set out to retrace the steps of Frederick Catherwood and his team in in the early mid 1980s. The project, spanning from 1985-1995, is a photographic reconstruction of the visual documentation of the Maya monuments made famous by Catherwood. Katz followed the trail of these explorers, endured some of the same hardships they experience, and re-documented the ruins Catherwood had so timelessly captured.

Throughout the project, Katz developed five different methods of responding not only to the ruins in front of him, but the prints that Catherwood had produced. In his first approach, Katz would juxtapose his images beside the ones that Catherwood had created. This showed not only his contemporary view through an new medium, but also the details that had been lost over years of decay. In his photo Uxmal, after Catherwood, 1985, the engraving reveals the beautiful details of the stone facade which the English artist must have examined closely in order to draw the unfamiliar Maya motifs with extreme accuracy. Such comparisons demonstrate the changes that have occurred to the buildings over time because these same details are not visible in Katz’s photo. We can also see the impact of the camera lucida on Catherwood’s work because the building has obviously been rendered backwards. Catherwood often reversed the images once he had arrived at home, but appears to have chosen not to in this piece.

Katz’s second method involved again both the original print and his own documentation, but this time the images feature a hand-held copy of Catherwood’s illustration. By including his hand on the page of the book, he places himself discreetly within the frame, becoming a participant on two levels, that of the observer and the observed. While following the rigorous mode of an objective documentarist (as attested to by recovering Catherwood’s viewpoint and evolving formats that allows us to compare the two visions), Katz also lets his personal vision to come into play.

Katz’s third approach excludes the Catherwood’s drawings. While adopting the same frontal viewpoint from which to take the photograph, Katz took  long-distance shots of the building surrounded by the lush, tropical vegetation. Often these photos depict places where Catherwood only did a line drawing, or wrote a brief account of the place.

In his fourth approach, Katz takes liberties and photographs buildings around those that Catherwood drew without rigidly following the prescribed angle of the English artist. This allowed Katz to bring his own vantage point to the work and meditate on his component of the work. There are a number of works, including Temple of the Descending God, Tulum of 1985, that feature the ubiquitous tourists. By incorporating this aspect of the here and now in these historical reconstructions, the artist comments on the transcendence of these monuments over different generations of visitors to the sites.

In the fifth approach to the Catherwood Project, the artist himself enters the frame cloaked in a black photographic cloth. Katz carefully devised a technique that enabled him to use an open flash to light the entire monument over a period of four hours in the pitch black of night. In Copán — Ritual para un Tiempo Transfigurado, the artist moved six feet each time he fired a flash of light until the monument was photographed. The results feature the repeated image of a shrouded black figure over the stairs of the structure. Although the ritual performed was a photographic one, it connects symbolically with the Maya monument and evokes associations with ritualistic celebrations that were at the heart of Maya life.

Through these five different approaches and several trips to this land, Katz was able to recreate not only physically but spiritually and emotionally a connection to this land. Many of the places he went to are still remote and through his thorough documentation he was able to experience many of the same things Catherwood and Stephens encountered. His final presentation of these works is prints that the viewer can look at in his intended order and will be on display at SITE Santa Fe as part of their SITElines: Unsettled Landscapes show beginning July 19th, 2014.

Leandro Katz will be screening his films “Los Angeles Station”, “Paradox”, and “El Dia Que Me Quieras” at the Center for Contemporary Art Cinematheque on August 18th at 7pm. The artist will also be discussing his work as part of the “My Life in Art” series with SITElines co-curator Candice Hopkins the following weekend. This will be held at the Armory for the Arts Theater on August 25th, 6pm. His work is on display as part of SITE Santa Fe’s exhibition Unsettled Landscapes, on display from July 19th until January 11th, 2015.