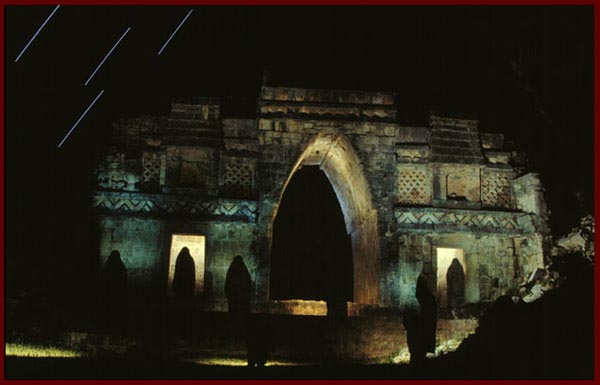 Fredrick Catherwood, an artist known for his highly accurate drawings of ancient ruins and artifacts, worked in a time where the technology of cameras and other methods of accurate reproduction were not fully realized. While Catherwood was naturally talented at this type of drawing, he made use of two different tools to achieve maximum accuracy. He preferred using a  camera lucida, but also made use of early forms of daguerreotypes when he was in the field. Catherwood’s understanding of this technology allowed him to create works that are still reliably accurate today.

The camera lucida, latin for “light room”, was a drawing tool invented by William Hyde Wollaston in 1807 as a drawing tool to achieve better accuracy. It essentially allows you to trace what is in front of you, and in full daylight, unlike earlier models. It appealed to Catherwood because it was light and portable so he was able to take it with him into very remote places and still achieve a high level of accuracy. The simplest form of a camera lucida is composed of a half-slivered mirror tilted 45 degrees. The artist looks into this mirror and is able to see a superimposed image of both the object in front of them and the drawing surface beneath them. While this specific design creates a right-left reversed image, but with angle augmentation and additional prisms and mirrors, artists were able to effectively use it drastically improve their life-drawings.

During the time of Catherwood’s explorations, photography was just beginning to put down roots. In their early expeditions the adventurers brought along a daguerreotype. Invented by Louis Daguerre, this tool was one of the earliest forms of photography. A chemically treated silver plate was put in a light-tight box until the artist was ready to capture an image. The box would then be opened, only where the lense was located, and after a certain exposure time (often longer than 10 minutes) the image would be replicated on the plate. When the “film” was placed into a chemical bath the image would become visible. Daguerreotypes were revolutionary, and they allowed Catherwood to depict with great accuracy what was before him in much less time. However, due to the metallic quality of the plates, there was not enough contrast for Catherwoods liking. He used it often for reference and would create etchings or more detailed drawings from them later. Sadly, on one of the expeditions the tool was crushed, so much of his later work was done without it.

The technology that Catherwood had access to when he was traveling in the Yucatan is quite primitive compared to what we have nowadays, but his skill in employing these tools is remarkable. Leandro Katz, a SITElines artist, brought these into consideration when he was working on his “Catherwood Project”. His works are not only informed by where Catherwood was standing, but also the techniques he used and how that influenced the final product. Through complex systems of lighting and different exposure times, Katz was able to recreate and enliven these works, giving us a yet another new way of looking at these ancient ruins.

Leandro Katz will be screening his films “Los Angeles Station”, “Paradox”, and “El Dia Que Me Quieras” at the Center for Contemporary Art Cinematheque on August 18th at 7pm. The artist will also be discussing his work as part of the “My Life in Art” series with SITElines co-curator Candice Hopkins the following weekend. This will be held at the Armory for the Arts Theater on August 25th, 6pm. His work is on display as part of SITE Santa Fe’s exhibition Unsettled Landscapes, on display from July 19th until January 11th, 2015.