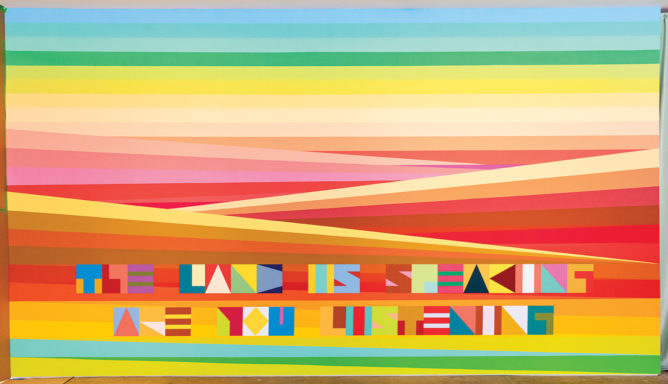 Painted directly on the wall, THE LAND IS SPEAKING | ARE YOU LISTENING is a newly commissioned work that depicts a landscape through graphic text. The vibrant palette is inspired by both Southwestern skies as well as the lush landscapes of the Northeast. Gibson’s original text prompts us to consider how the Earth communicates with us and subtly expresses frustration with those who abuse, neglect, and exploit the Land.
BEADED BIRD SCULPTURES, 2021 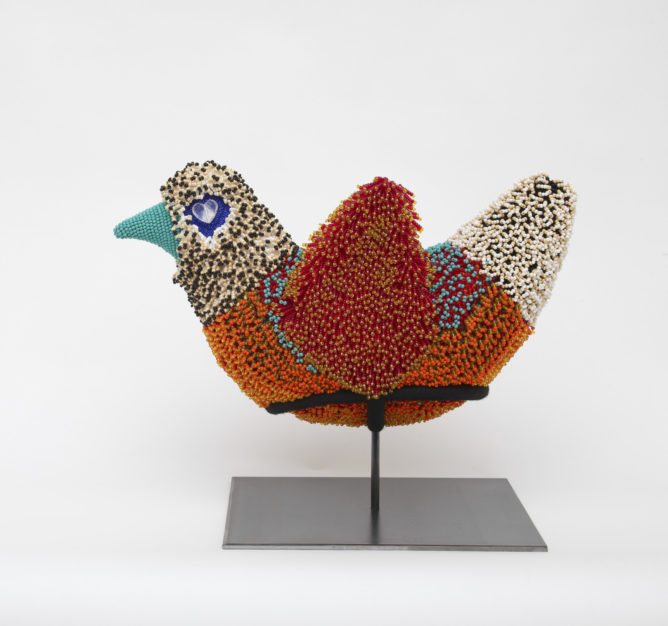 These sculptures reference turn-of-the-century “whimsies,” small beaded textile objects made by Haudenosaunee peoples among others, reflecting Victorian motifs, which the artist first encountered as a Native American Graves Protection and Repatriation Act assistant at the Field Museum in Chicago, Illinois. Not easily fitting within artistic categories or cultural identities, whimsies became most commonly known as tchotchkes sold in the Niagara Falls region, a kitsch commodity straddling two worlds without being embraced fully by either. “That’s what drew me to them,” says Jeffrey Gibson. “I kind of felt myself reflected in them to some degree.”
Included artworks: Firebelly, 2021; Black Beauty, 2021; My Joy My Joy My Joy, 2021
UNTITLED WALLPAPER, 2022 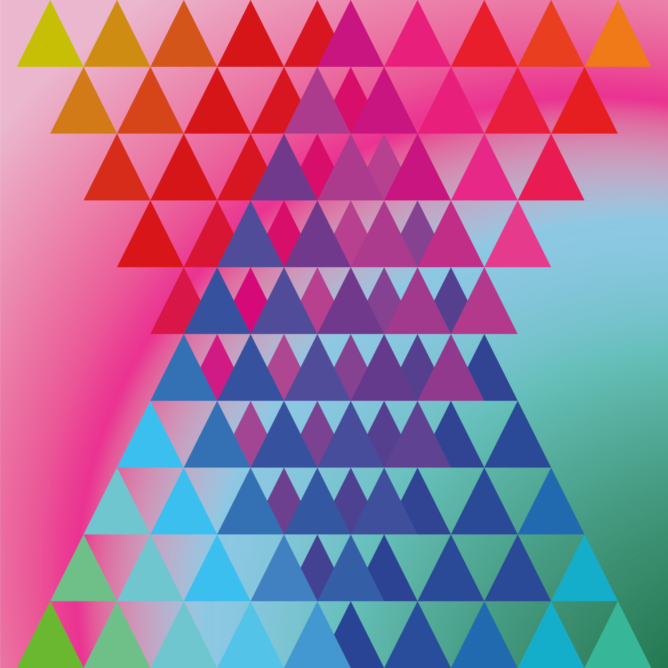 In contrast to the traditional “white cube” gallery space, Gibson’s newly commissioned wallpaper extends the rich color and patterning present in his paintings and sculptures into the surrounding environment. Creating an immersive experience, the wallpaper shifts the context of how Gibson’s works are seen and experienced from the purely visual to a full-body engagement.
SWEET BITTER LOVE SERIES, 2020 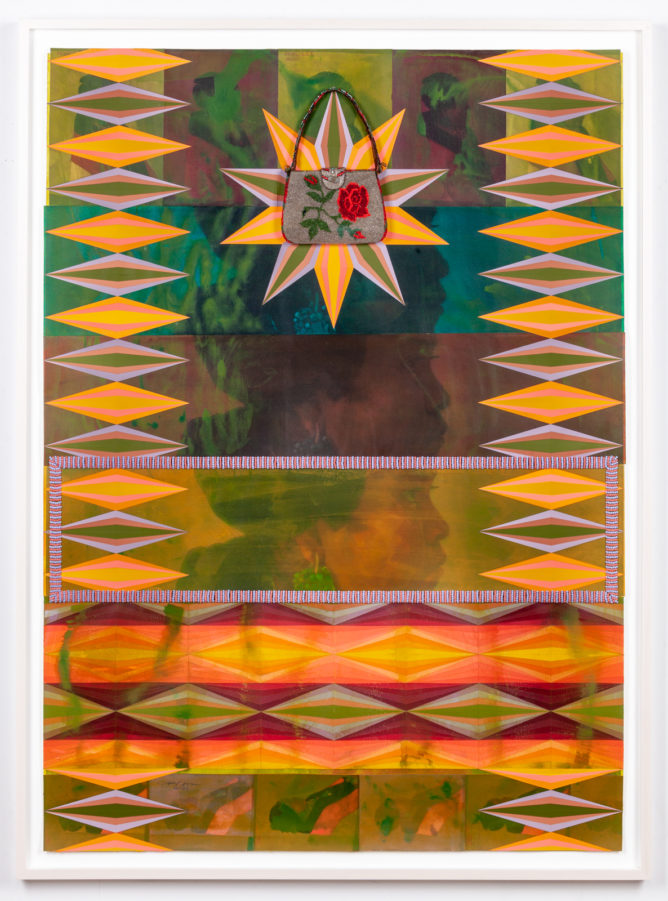 Sweet Bitter Love is a series of paintings made in response to a group of 19th century portraits by Elbridge Ayer Burbank. Unsettled by the lack of individuality or care given to the Indigenous subjects, Gibson re-envisioned these paintings as “found marks,” pouring, staining, and overpainting directly on top of them. For Gibson, Burbank’s portraits say less about the sitter and more about the painter. They do not show evidence of the widespread land seizure, imprisonment, and cultural erasure that characterized the time in which they were made. Gibson’s interventions reflect on Indigenous histories and open critical discourse about how Indigenous people are represented in cultural institutions. A nod to the eponymous song by Roberta Flack, “Sweet Bitter Love”, the series echoes Flack’s sentiment of being in love despite the additional hardship that love brings—though for Gibson, the painful love is for Indigenous histories rather than an individual.
Included artworks: Chief Black Coyote, 2021; Boneta, Comanche, 2021; Pahl Lee, 2021; White Swan, 2021
UNTITLED FIGURES, 2022 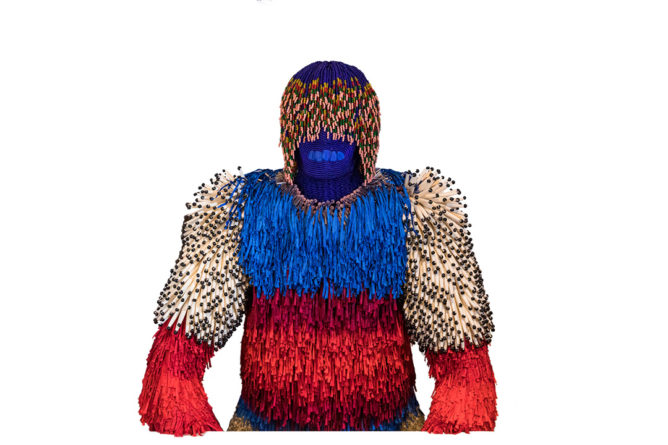 During his time at the Field Museum, Gibson encountered small toy dolls from the Plains tribe region, depicting a spectrum of genders inconsistent with the Western binary. Inspired in part by these particular dolls, as well as the aesthetic and instructive role dolls play in numerous cultures, Gibson creates towering beaded figures covered with thousands of stacked bone pipes. During the hundreds of hours it requires to make just one of these immense sculptures, Gibson is careful to not predetermine their gender expression, cultural tradition, or historical role. The resulting figures assume the role of both nobody and everybody, and function as “proposals for future hybridity.”
Included artworks: Untitled Figure 1, 2022; Untitled Figure 2, 2022
SHE NEVER DANCES ALONE, 2020 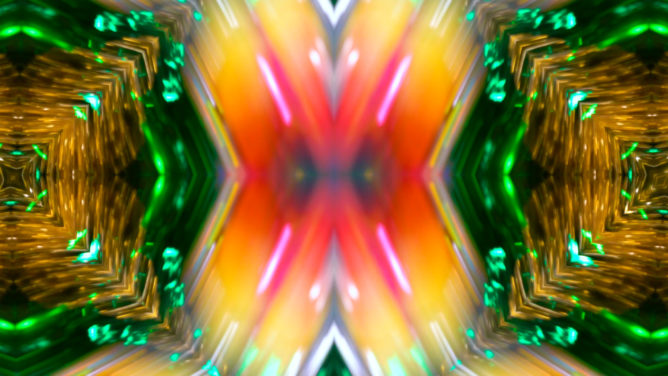 Inspired by the jingle dress dancers who gathered to defend Standing Rock Reservation from the construction of the Dakota Access Pipeline in 2016, She Never Dances Alone reintroduces dance as a powerful tool of resistance and protection. Commissioned by Times Square Arts for their Midnight Moment Series 2019-2020, Eastern Shoshone/Northern Arapaho performer Sarah Ortegon saliently dances to “Sisters” by A Tribe Called Red across seventy massive monitors in New York City’s Times Square for three minutes each night over the course of eight months. Shown at SITE Santa Fe as a nine-channel video installation, Ortegon’s powerful movements connect her to a dynamic legacy of dance and dancers, reminding us that she never dances alone. 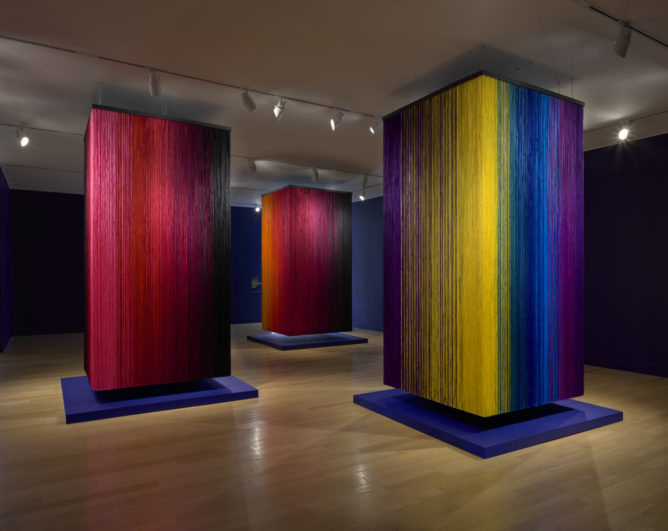 Made from nylon shawl fringe commonly found on a dancer’s regalia, this series repositions fringe as a primary sculptural material, rather than simply an adornment. “There is a human quality to the fringe in movement,” says Gibson, referring to the nuanced ways the material responds to its surroundings. In arranging the fringe to evoke bold, solid, monolithic forms, these sculptures contribute a dynamic and caring human touch to our vision of modernity and the future.
Included artworks: Red Moon, 2021; Red Sunset, 2021; Desert Sky, 2021
TIME CAPSULE (PINK HOLE), 1998-2012 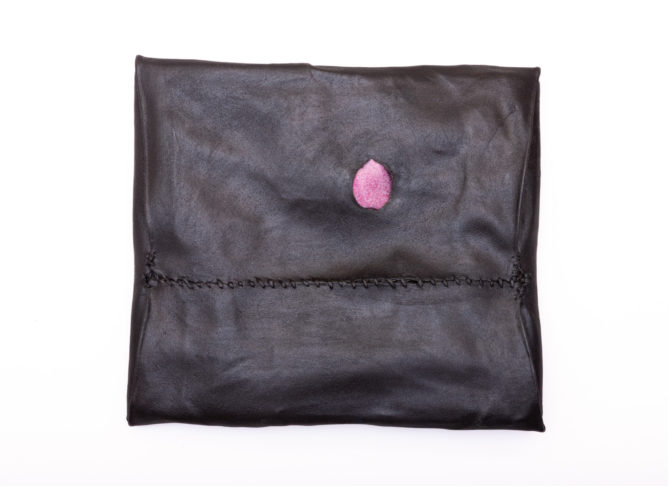 In 2012 Gibson began cutting his paintings off the stretcher bars and washing them at the laundromat. Questioning and confronting ideas of success, failure, hope, and aspiration, this cathartic ritual transformed his paintings into textiles. Inspired by the idea of time capsules, he began folding and encasing the laundered paintings in rawhide packages, displaying the mysterious, wrapped art objects on the wall. “If somebody were to acquire that piece,” says Gibson, “they can open it and see the full painting if they want. It’s for them. It’s their painting. They can perform it.”

Pink coloring peeks through the painted black hide of Time Capsule (Pink Hole), hinting at the content underneath and reflecting a color palette repeated in Gibson’s 2022 video, A Warm Darkness. 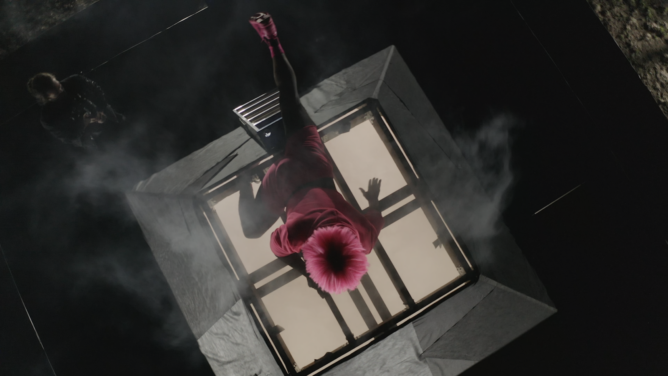 A Warm Darkness, 2022 was envisioned and directed by Jeffrey Gibson, performed by Mx. Oops, and scored by sound artist Raven Chacon. Filmed throughout his ziggurat-inspired sculpture, Because Once You Enter My House It Becomes Our House 2020, this work playfully embraces darkness and the intimacy of solitude. Mx. Oops, clad in hot pink, dances to Chacon’s drone beats in a solitary rave inside the sculpture. As the sun sets, a group of youths shrouds the structure in black cloth, and it disappears into the night. Embraced by a comforting and secure darkness, Mx. Oops continues dancing inside, privately and for themselves. Inspired by science fiction and Indigenous world views, the film examines the intimacy of a party for one and the role of the audience.
TO FEEL MYSELF BELOVED ON THE EARTH, 2020 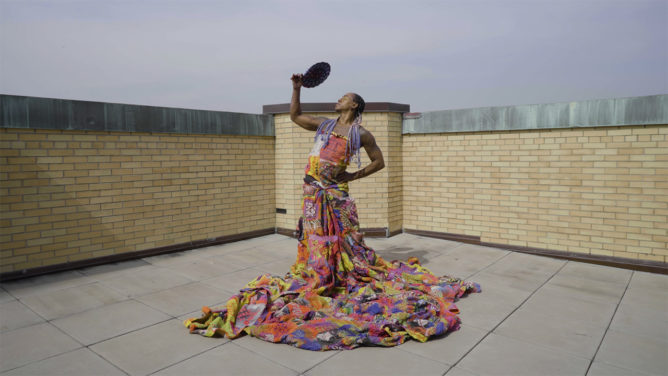 Drawing its title from an excerpt of Raymond Carver’s poem, “Late Fragment,” Gibson poetically marks a tumultuous moment in world history and focuses on the joy of simply continuing to survive amid challenging times. Made in 2020, Gibson’s video unpacks feelings of anxiety, fear, and national reckoning, as well as the grounding effect of working in nature experienced by the artist and many of his contemporaries. Obliquely referencing widespread and ongoing activism advocating for Black, Transgender, Queer, Women’s, and Indigenous rights, the numerous unique individuals presented in the film are united by their brilliant red garments.
TO NAME AN OTHER, 2019-2022 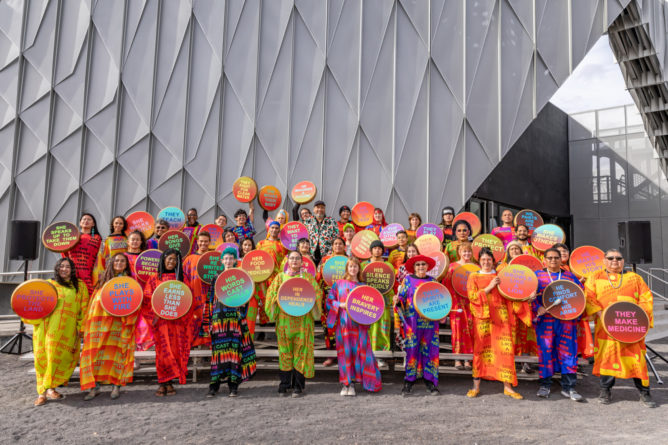 Gibson’s largest performance to date, To Name An Other explores Indigenous practices of naming based on the actions or qualities of a person through fifty short texts authored by the artist. Sparked by Dr. Christine Blasey Ford’s testimony during the confirmation hearing of the now-Supreme Court Justice Brett Kavanaugh, the first of these texts came to Gibson intuitively: SHE SPEAKS UP TO TAKE THEM DOWN. Addressing the complex intersections of gender, race, and class, each series of words operates as a “name” to be embodied by participants. Performed by volunteers, Gibson first holds an empowerment workshop where participants practice using their voice to speak these powerful phrases publicly, loudly, and with purpose. During the performance, each participant dons a custom garment and drum emblazoned with their “name” and presents it to the audience.

Originally commissioned by and performed at the National Portrait Gallery in Washington, DC, To Name An Other has also been performed and exhibited at the New Museum in New York City, New York, as well as the Esker Foundation in Alberta, Canada. For SITE Santa Fe’s iteration, Gibson was able to work with the largest group of Indigenous participants thus far. 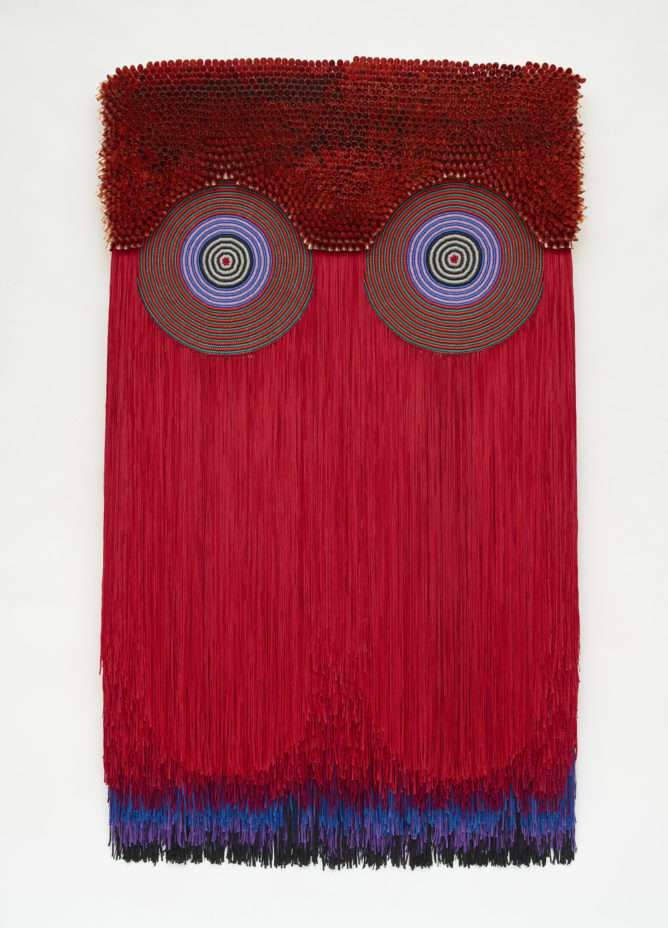 After extensively exploring the mediums of beadwork and fringe, Sentinel marks a turn in Gibson’s practice when mediums that would normally take a supporting role are scaled up to become the center and subject of the piece. Launching as an exploration of material, Sentinel began as a humorous outlier that would eventually inform pieces like Red Moon, Desert Sky, and Red Sunset, 2021. An enormous, ghostly character with dramatic fringe shapes hanging from huge eyes, Sentinel’s disarming gaze has a way of following viewers throughout the space. Intended as a protecting and vigilant presence, Sentinel joins a series of Gibson’s artworks united by dramatic eyes, dating back over fifteen years.
QUILT BLOCK PAINTINGS, 2021 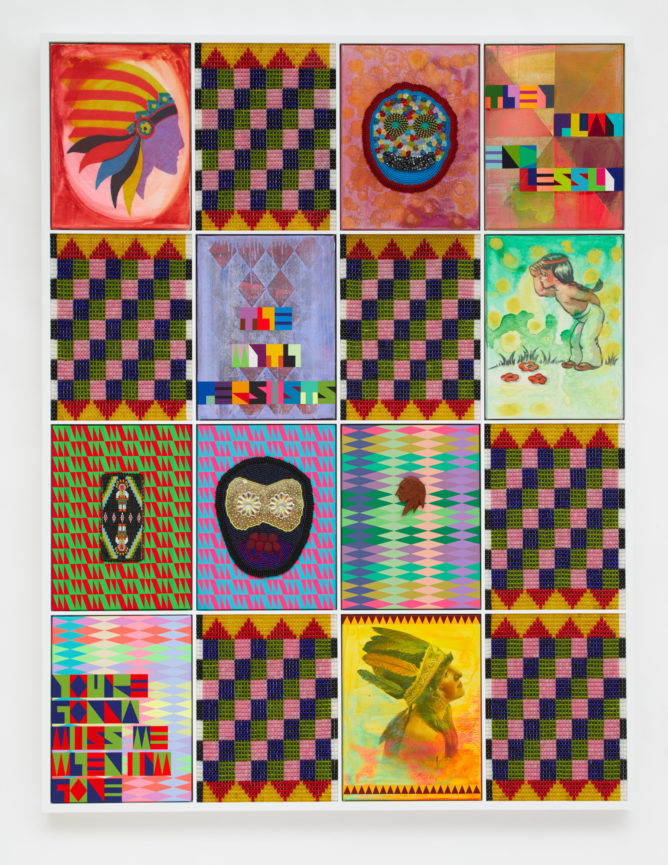 Blossoming from the artist’s personal history of making and collecting quilts, these paintings build on quilting’s ability to marry otherwise disparate influences to tell a story about comparisons, histories, and gaps. In juxtaposing sixteen sections of text, image, patterning, and several distinct periods and styles of beadwork, these multifaceted artworks explore the ebb and flow of connection, dislocation, and reconnection.
Included artworks: They Play Endlessly, 2021; Over the Rainbow, 2021
STAND YOUR GROUND, 2019 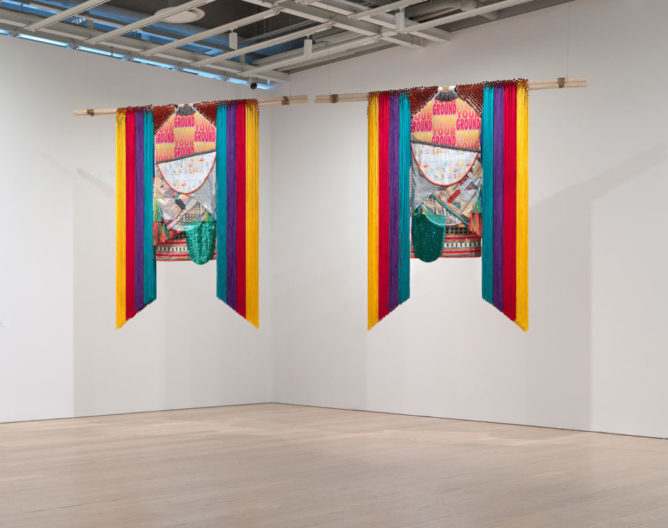 Operating simultaneously as banners, clothing, and sculpture, STAND YOUR GROUND is a diptych made during a period of heightened activism surrounding environmental justice for Indigenous communities, Murdered and Missing Indigenous Women, Black Lives Matter, among others. Exploring the balance between vibrant individualism and robust community, these paired artworks mirror each other while remaining unique, just as members of a group might signal shared values through dress.
ALL I EVER WANTED ALL I EVER NEEDED, 2019 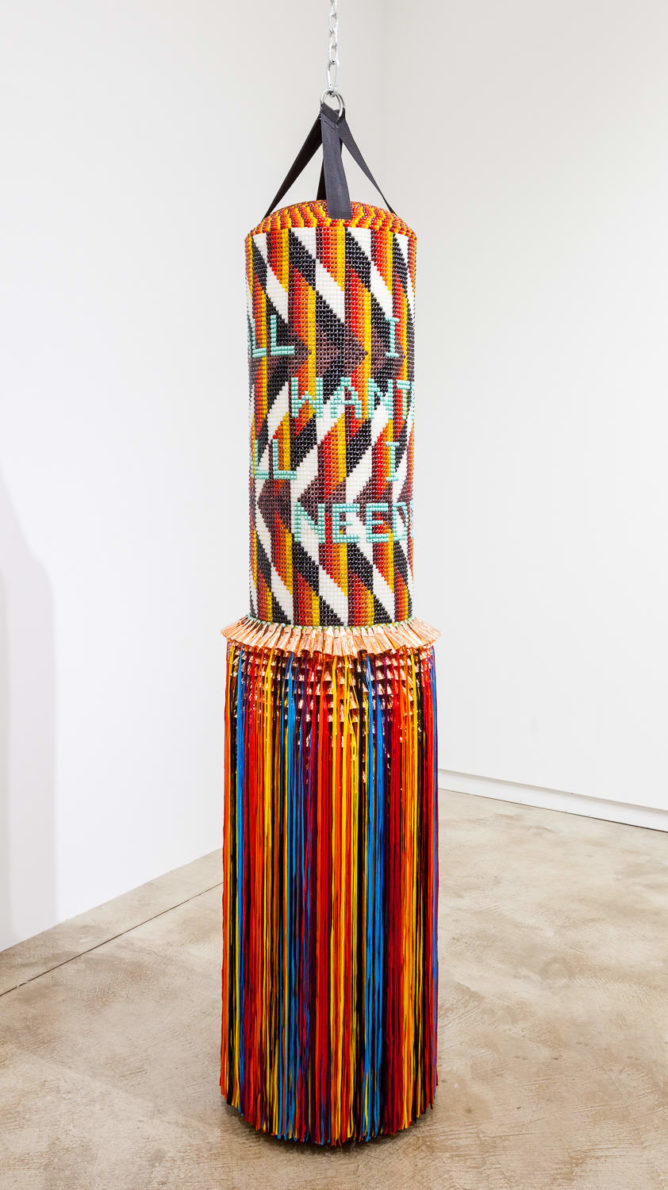 Works included in the exhibition

To Feel Myself Beloved on the Earth, 2020

To Feel Myself Beloved on the Earth, 2020: Courtesy of the Palm Springs Art Museum and Jeffrey Gibson Studio

This exhibition was organized by SITE Santa Fe and curated by Brandee Caoba.

Special thanks to Jeffrey Gibson Studio; SITE Santa Fe’s Exhibitions Manager, Max Holmes; and the talented preparator team for bringing the exhibition to life in the galleries.

Thank you to SITE Santa Fe’s Education, Public Programs and Exhibitions Departments for organizing the New Mexico iteration of To Name An Other, and special appreciation for each of the performance participants.

Significant gratitude to Jeffrey Gibson, Brandee Caoba, and Rica Maestas for their contributions to this gallery guide, and to Liliana Herrera for the beautiful English-to-Spanish translation.

The Body Electric is made possible through the generous support of the Carl & Marilynn Thoma Foundation.