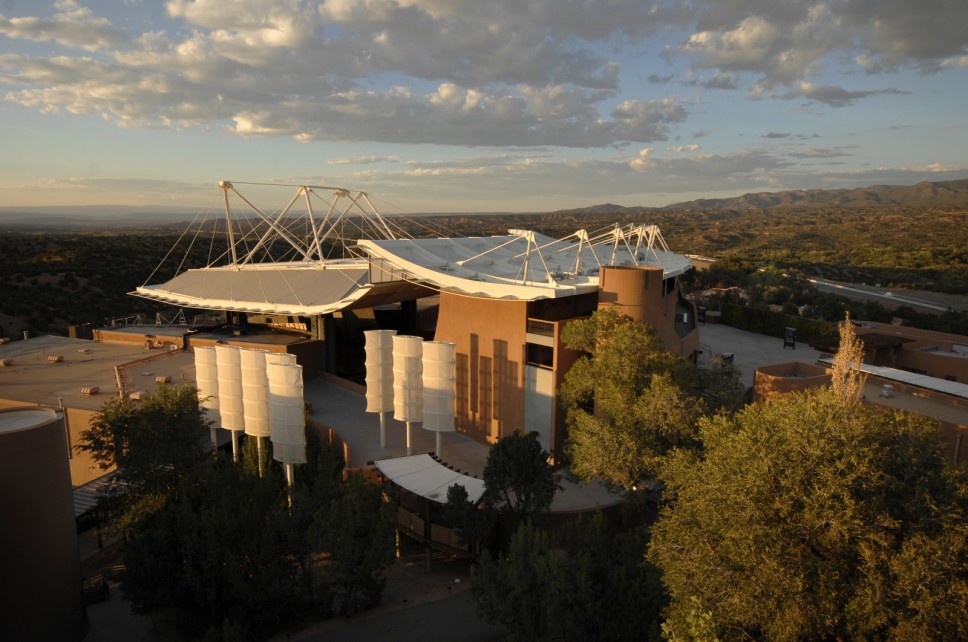 Sophia Livingston is a summer intern in the Education Department at SITE Santa Fe.  She recently graduated from the University of Tampa with a Bachelors in Fine Arts. Sophie enjoys the art and educational aspects that being an intern at SITE offers.

Earlier in July, SITE Santa Fe interns and SITE Santa Fe Young Curators went on a field trip to the Santa Fe Opera. We were lucky enough to go on one of their tours of the Opera house.  Our guides took us down to the basement, where we were able to see some costumes up close and hear about the grueling process in creating one. We then made our way to the set design workshop, where we were able to see previous Opera sets.  Then our lovely guides took us to where all of the props from all of the Operas were stored. The vast number of props they had collected blew us away. We then made our way upstairs and found ourselves amidst a sewing and wig workshop. We were amazed by the amount of time it takes to complete each costume and wig.  To end our tour they took us to the theater, where they showed us pictures of the past two Opera houses. For someone who has lived in Santa Fe since the 5th grade, hearing the history of the Opera House was something I had never heard before. I am definitely going to try and make it to one of their operas after hearing about the history and process of putting an Opera together. I recommend to anyone who is unsure about the opera to take a tour at the Santa Fe Opera. You will definitely leave with a feeling of gratitude for what they can accomplish in a season.

Kiersta Hsi is an intern in the Education Department at SITE. This fall she will begin her last year at Vassar College, where she is studying Chinese and Studio Art.

One would think that beginning work in July after living, studying, and absorbing life in Istanbul for 5 months would feel rather drab in comparison to her prior lifestyle. But as I rode the Rail Runner up to Santa Fe for my first day working as an education intern at SITE, I became shockingly enamored with the small trackside houses with expansive desert fields rolling out of their backyards. As I stepped off the train and bathed in its red paint glow, I spent a minute grasping my new bearings and carefully observing the platform that my treading feet will certainly become well acquainted with upon walking to SITE Santa Fe several times a week.

Already in awe of the beautiful New Mexican morning skies, the flaky pastries at the Santa Fe Farmers’ Market, and the luring architecture of Greg Lynn that I admired as I entered SITE, I couldn’t have began to guess the exciting day that was rising up in front of me.

Lucky for me, my first day of work landed on a summer program trip for a backstage tour of the Santa Fe Opera House. We arrived at the elegantly monumental opera house amidst the browns and dried greens of vast natural scenery. Our guide took us around the massive complex, through mazes of opera history, as we walked around props and sets that made their debut in past performances.

We learned that this opera house was special, in that the only way to move props and sets onto the stage was from below. At the end of a pathway formed by the storage of large set structures lay a massive lift that could hold about ten tons of weight and that acted as a portal allowing the stage to transition between genres, eras, and settings.

This theme of transformation carried by the lift was reinforced as we made our way into the costume and wig rooms. In these spaces we were to remain silent, a rule that only amplified the shocking experience when we walked through the doors and were met with the sounds of modification: sewing machines buzzing, seamstresses murmuring among each other, and scissors making decisive slices through fabric. For some reason, before we had entered the costume room, I had expected to walk through aisles of hanging costumes from past productions. In no way did I expect to see a fluid group of hands producing future garments. But it wasn’t that these people were only making costumes; they were held to an exact science of specific measurement for the actors’ bodies and perhaps, more importantly, for their onstage movements.

Finally, we entered the wig room, where each wig is made specifically for the wearer’s head. Two women worked, meticulously weaving a single hair at a time through the wig base to create a completed piece. Although in earlier times white wigs were normally made from yak’s hair, now all of the wigs used are composed of human hair, ready to manipulated depending on the role.

As we wandered out of the backstage rooms that held unused props and the hidden secrets for transformation on the stage, we were able to admire the full structure of the opera house. Carefully designed to keep out the gusts of powerful mountain wind and to prevent surprise monsoons from soaking guests, the opera house stood beautifully modern within its stunning desert background. As I observed the meticulous care of workers building a scene on stage, images of the SITE exhibitions crew setting up the new opening exhibit of Enrique Martinez Celaya echoed in my mind. Both groups set up detailed environments to create a specific feeling and convey some sort of meaning for the viewer.