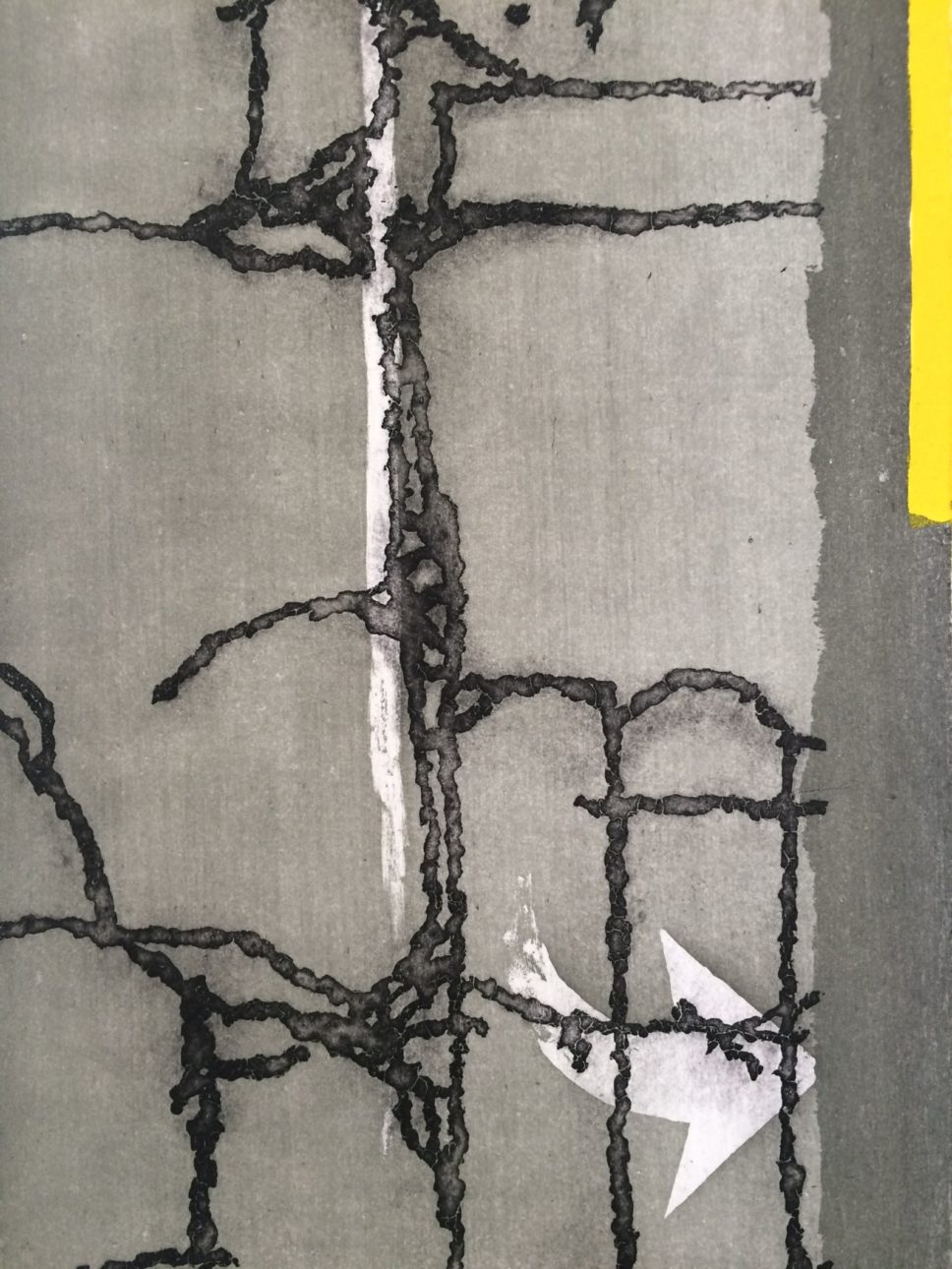 Combining artistic talent with keen intellect, Robbie Sugg documents the overlooked. Through his painting and printmaking, this SITE Scholar breathes visibility into mundane ephemera. When some might throw an item into the waste bin, Robbie grabs hold of it and turns it into art. By presenting objects as small keys to a larger history of urban change, Robbie invites viewers to look at everyday items with a new awareness and respect for the labor that went into what is now forgotten and rendered as trash. “Upon first view, incidental scuffs, cracks, and markings in the urban surface could be found practically anywhere, yet they serve as a fingerprint of a particular place in time,” says Robbie.

A Bay Area artist at heart, Robbie grew up in California, a place that heavily influenced his work, “I was very inspired by [the Bay Area’s] history. In the last 5 years, the area has undergone class cleansing and monumental changes, since it is now the most expensive city to live in the world. Reeling from watching my home become stripped of its working class, part of my response to that gentrification is to highlight what goes unnoticed. My main hope is that people will not take the places they live for granted because they are always changing. I’m focusing on all the little details of my lived environments that might be gone in another 5 years.”

After completing his Bachelor of Arts degree at San José University, he moved to New Mexico to pursue a Master of Fine Arts degree in Art Practice and Printmaking at UNM. He was drawn to UNM’s “renowned printmaking program,” as well as the acclaimed faculty and former graduates which includes Richard Diebenkorn, a huge hero of Robbie’s, who graduated from the program in 1951. “I am literally following in his footsteps and am excited to be entering that same history of the other artists that have been here. It’s quite an honor to have a studio in the building where he worked!” says Robbie.

Through the influence of his home and the teachings of his professors, which he regards very highly, Robbie has found his niche working with “detritus and surfaces to document the ephemerality of the places we live.” The artwork he chose to feature is titled “Cancellations,” 2018, an installation which encompasses many works including: an etching, screen print, wood, wood glue, gesso, road paint, found flooring, a panhandler sign, and a geological specimen. “Cancellations” documents the surface of Central Avenue (the old Route 66) in Albuquerque prior to its renovation. Robbie explained the road’s long social and cultural history, “Before they tore up the street I was documenting all the road repairs that workers had done on the road prior. I’m highlighting the invisible labor of workers who wouldn’t necessarily consider themselves artists, but nevertheless create images within the street itself. I can isolate that, turn it into a large etching and, even though all of those markings are now gone, they live on in this sheet of paper,” says Robbie.

“My work is like an archeological dig of the present rather than the past,” says Robbie. Rather than documenting monumental changes of cities such as buildings being torn down or built up, Robbie investigates changes on a micro-scale, “Macro-changes are so overwhelming that my way of dealing with them is to focus on the tiny, inconsequential, and mundane elements. I’m interested in how the small changes can act as metaphors or symbols of larger ones.”

SITE Santa Fe is pleased to count Robbie as a member of its SITE Scholar Program. He will present this piece in the upcoming SITE Scholar Exhibition, on view May 4-28. Regarding the program, Robbie feels it’s extremely validating. ”Sometimes being an artist, you feel like you’re shouting into the void and nobody is hearing you. To be recognized by this program is validating in the sense that I feel I’m being heard by people. It’s really heartening to see that people are interested in what I have to say and hopefully my art can have a positive effect on the world, or at least on how we relate to it.”

Robbie would like to send a special thanks to many of his teachers and inspirations: Patrick Surgalski, Erin Goodwin-Guerrero, Rupert Garcia, Gale Antokal, John Landry, Yoshiko Shimano, Scott Anderson, Dr. Kirsten Pai Buick, Patrick Manning, and all of his professors. Thank you Robbie for sharing your art and mission with us. We’ll look forward to seeing your featured work in our upcoming exhibition!