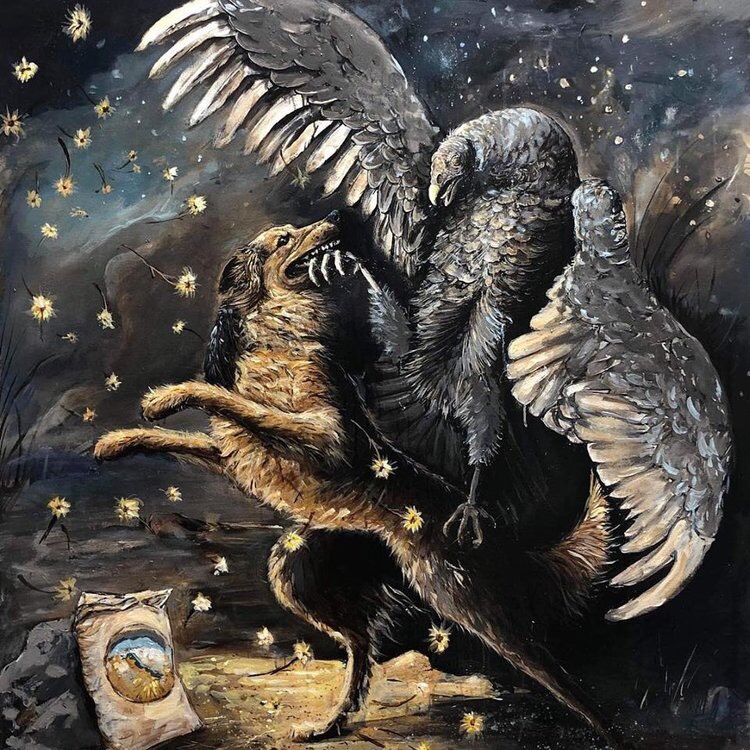 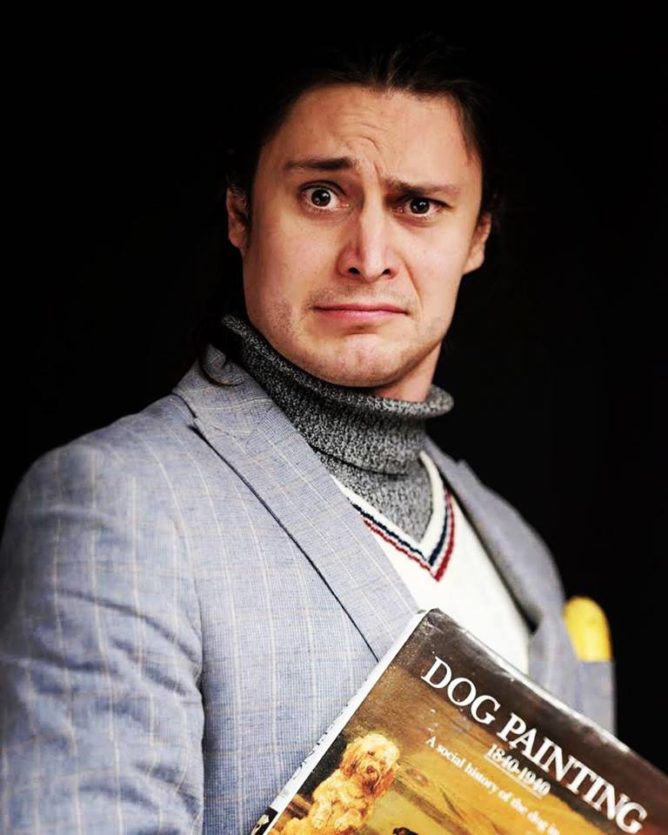 The SITE Scholars Exhibition is here!

This week we’re featuring Chaz John, a SITE Scholar from the Institute of American Indian Arts (IAIA). Chaz is a Native artist with Nebraska Winnebago and Mississippi Band of Choctaw tribal affiliations, producing quickly-lined and illuminated paintings and drawings. Humor is at the heart of his work, which at the surface level is accessible and may appear seemingly straightforward. His artwork has evolved to carry deeper meanings tying into his Indigenous identity creating “poetry in the face of conflict.”

Last spring, Chaz began his “Rez Dog” series, which initially began as a joke! He jabbed with some friends that it would be hysterical to release a pack of rez dogs on Canyon Road, creating the ultimate juxtaposition of feral dogs in the face of upscale art culture (don’t worry, that never happened)! Each painting in this series is based upon Victorian era dog paintings which feature regal and loyal dogs in lavish spaces. He replaces those gleaming dogs with feral looking rez dogs, which “indigeizes colonial type dog art.”

Although Chaz’s work has a playful sense of humor, he explains, “This series brings up a lot of different social issues and dynamics.” He uses indigenous humor to curtail the serious thematic vein of his work. “I want it to be a weird poetic take on a modern myth of the rez dog and convey it in a humorous way,” says Chaz.

Chaz’s work is for the dogs—here are a few canine focused elements of his artwork:

-The ceramic pieces have Vienna sausages hidden in them for survival

-All paintings are raised a dog height

-There are normally water bowls & treats next to his works

-All colors are in the color scheme dogs see in

Chaz remembers childhood trips going back and forth to the reservation in Winnebago, frequently being hollered at not to play with the rez dogs. “These dogs are really interesting to me because they are feral and live on the outskirts of human civilization. They aren’t completely wild, but at the same time, they are completely wild. They’re tanks. Survival machines. You’re never gonna kill a rez dog—they just keep going,” says Chaz.

The painting featured above is “Rez Dog Fights Turkey Vulture to Protect Blue Bird Flour,” 2019. The piece is a representation of the “mutant [dog] breed.” His painting series has provided an outlet for Chaz to explore his Indigenous identity and history of being displaced, which has taken a toll he has grown to increasingly understand through the evolution of this series. “It’s important to let Rez Dogs go where it needs and to keep building on it. You can look at a dog painting and think ‘wow it’s a dog painting, I like dog paintings, how straightforward…’ but if you know about rez dogs and have those experiences, it starts to break down those layers of exactly what that is.”

Through IAIA’s supportive community, Chaz now feels comfortable talking about what it means to him to be an Indigenous man and holds his art career as a top priority. “I have found the confidence and voice to be able to speak up about these things and more contemporary native issues. I see them through my own lens as someone who has dealt with assimilation and found their way back to my cultural roots.”

Chaz exhibits three pieces in the SITE Scholars Exhibition opening this Saturday May 4, with a free opening reception May 3 from 5-7 PM. In reflection of his SITE Scholar experience, Chaz shares, “I found out that I was nominated as a SITE Scholar when I was in my studio checking my email and they congratulated me! It was a good surprise! It’s very cool that SITE is providing opportunities for up-and-coming artists, especially those getting out of school to have the boost they need to get work out there and have a platform to talk about what they are working on!”

He will also have a solo exhibition at the Ellsworth Gallery downtown in August during Indian Market. SITE Santa Fe is proud that Chaz John is in our SITE Scholars Exhibition.
Thanks Chaz for sharing your story with us!