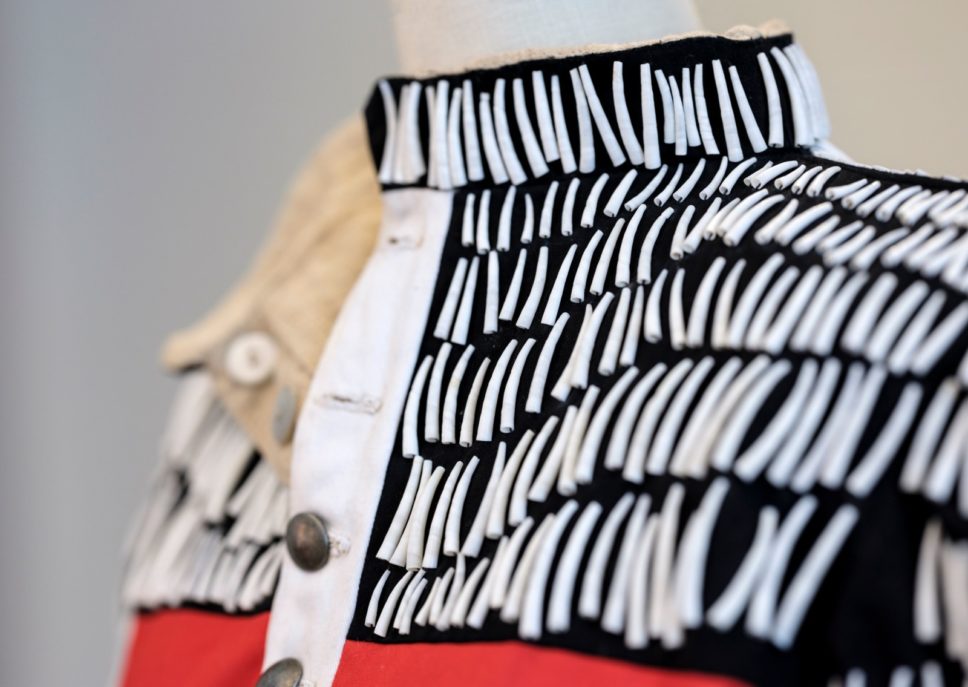 This week’s featured SITE Scholar is Anangookwe Wolf, an interdisciplinary artist in her senior year at the Institute of American Indian Arts (IAIA). When describing the heart of her artistic inspiration, she said, “I can speak the strongest about my family, its history and my cultural history — which is very fascinating to me.” Anangookwe utilizes jewelry, performing arts, music and textiles as her mediums of creation & exploration.

Originally from Wisconsin, Anangookwe wanted to escape the cold and learned about IAIA from her mother’s legacy at the institution in the 80s. She remembers joking with her friends that she would one day be a part of the SITE Scholars program… And soon thereafter, she was nominated by some of her professors! Newly inaugurated into the program with her peers, Anangookwe is excited to get to know others through the program and loves meeting new people!

Anangookwe’s featured piece is a reversible dress titled Phillippena, 2019. The garment is a historical recreation of her great grandmother’s boarding school uniform and traditional regalia. The more “plain” outside of the dress is made from silk and recreates the uniforms worn during the era of Indian Boarding Schools. The inside reveals a “colorful” traditional dress, made with cotton and dentalium. This young artist’s great grandmother, Phillippena, was part of the Assiniboine Tribe in Montana and attended the Fort Shaw Indian School in the early 1900’s.

The graduating seniors of the IAIA school will present their senior show April 19th. In Anangookwe’s segment of the show, titled Matriarchs, she explores the history of two influential women in her family who lived during this era. “Much was lost during that time. Things were preserved and hidden so my family could stay together to survive,” said the SITE Scholar. Anangookwe will include her featured piece in the show, in addition to another garment about her other great grandmother, Mary Wolf, who went to the Hampton Institute in Virginia. Anangookwe shares that art is the best way to gather her thoughts, “Art is very therapeutic for me. It’s the best way to handle trauma and other factors of life.”

Thank you Anangookwe for sharing your art with us and we’ll look forward to seeing your exhibition in April, as well as your featured work in the upcoming SITE Scholars exhibition on view at SITE Santa Fe’s SITElab gallery from May 4-28.