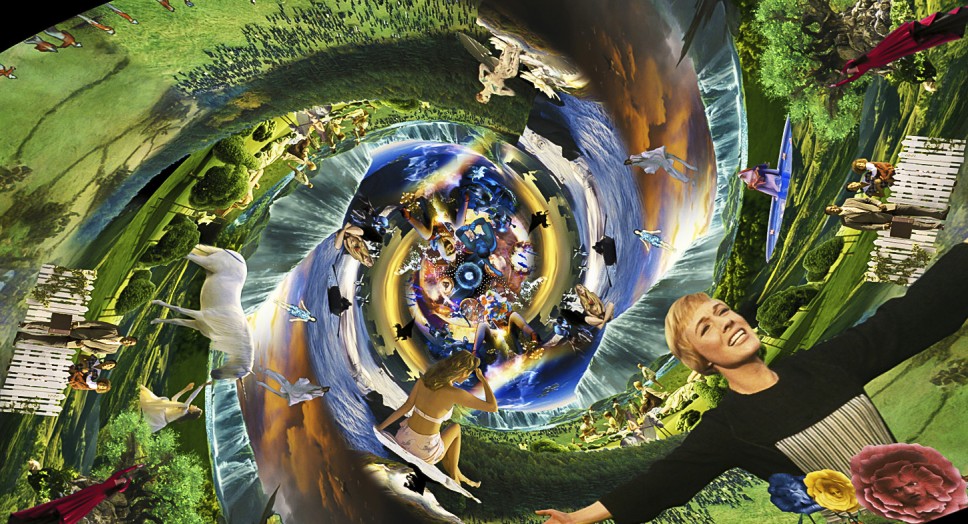 Yilin Yang is an intern in the Education Department at SITE. She is from China and has been studying art history at Wesleyan College in Macon, GA for two years. Her enthusiasm for contemporary art and curiosity about museum work brought her to SITE Santa Fe this summer.

The first SITElab exhibition, “Marco Brambilla: Creation (Megaplex)” opened on June 8, 2013.  Marco Brambilla is a New York- based video artist who has made outstanding achievements in both commercial and artistic filmmaking. “Creation” is the last film collage in the Megaplex trilogy.

The video starts with the big bang and then transitions to a collage of flying DNA helixes and stars. As the first human figure appears in a transparent bubble, the focus of creation switches from nature to human beings. Religious elders and rituals serve as the prologue to human creation during the pre-modern ages.  Led by Julie Andrews from The Sound of Music, a sensuous montage about art and emotions reveal the carnival of humanity in modern times.

In the next section, the video exhibits the scientific miracles through clips of robots, weapons, and spacecraft from sci-fi movies. However, all these fantastic artifacts collapse in raging fires. After the destruction, the loop finally goes back to the cosmic start.

Reflected by the complex yet humorous editing of this video, Brambilla’s interpretation of human creation is neither excitingly laudatory nor harshly critical. On one hand, Brambilla does unveil some profound issues in “Creation”.  For instance, the fire disaster is a metaphor for the dark side of modernity. War and destruction are aggravated by human infatuation with technology and complacency. Nevertheless, the whole video, which is accompanied by the brisk Cinderella’s Waltz, is more like a collection of playful circus performances. The Japanese animation figure, Atom, is smiling while being swallowed by the center. The fantastic eye of Sauron, from The Lord of the Rings, is set in front of a futuristic aircraft. Playing with both reality and imagination, Brambilla successfully reveals the curious, playful, and audacious spirit of creation.

Artistically and technologically,  “Creation” is indeed a crescendo of Marco Brambilla’s epic series of human beings. The other two works in the trilogy, namely “Civilization” and “Evolution,” are, respectively, structured in an elevator and a side-scroll. Instead of those simple and straightforward formats, “Creation” utilizes a more powerful structure, the double helix, to stress the dynamic progress of the film clips. The use of 3-D technology further amplifies the striking visual impact and gives audiences a joy that cannot be experienced without 3-D glasses.

Besides Brambilla’s video collage, “Creation”, what other forms of expression have been more imaginative and glamorous while still honestly revealing the history of humankind?  By virtue of the playful montage, Marco Brambilla manages to blur the boundary between popular entertainment and serious historical discussion.