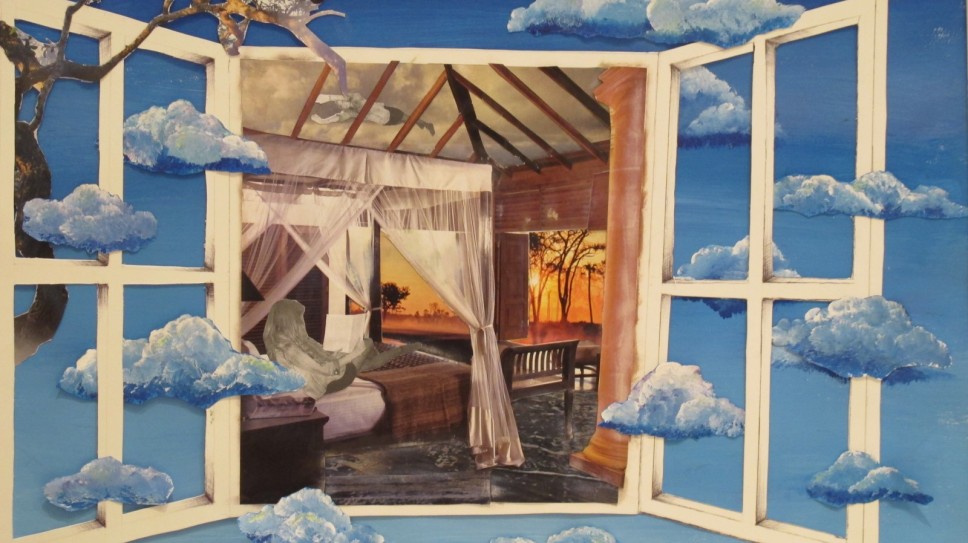 Phantasmagoria is a collection of works created by a talented group of New Mexican high school students. The Young Curators Program, organized and facilitated by SITE Santa Fe’s Education Department, helps a group of students to curator an exhibition populated by works they themselves have created.

In the small geometrical room that is the Visual Art Gallery at SFCC, four films play on opposite walls, sculptures are scattered around the room, paintings and drawings are arranged along the wall, and the words  “He loves me, he loves me not” mixed with the rhythmic ticking of a clock echo from Catherine Wright’s video, Caliginous. In the center of the room a cluster of clouds are suspended over a neatly made day bed covered with a quaint lilac quilt.

According to the press release for the show:

“Phantasmagoria is an exhibition… that explore dreams, surreal images and other bizarre creations of the mind. The show aims to immerse the human psyche into the mental and physical world of dreams. Phantasmagoria will awe, confuse, frighten and disturb viewers, leaving them overwhelmed with a sense of wonder and curiosity for the dream world.”

These last descriptions of the intended reaction stretch the truth of the exhibitions accomplishments. There is nothing frightening, disturbing or overwhelming about this show. That being said, it is not with out charm and a certain… “cool-ness”, an atmosphere created by these energetic and enchanting pieces.  Such as Cynthia Bauer’s work Victoria Rex, a clay model T-Rex dinosaur donning 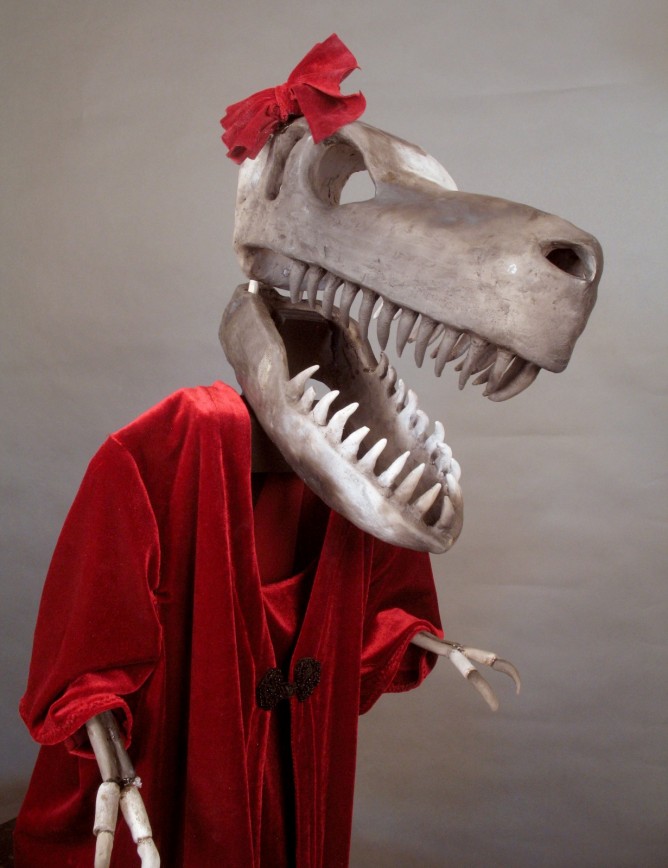 a red cape. This piece is playful and curious. The artist describes the T-Rex as a child making the tiny regal-red outfit even more captivating and a little funny.  Oakley Robertson’s Rift directly opposite the all-bones dinosaur also caught my eye. Two floating hands hold a white bone, which appears to be in the process of snapping in two. These realistically modeled hands are an intriguing mix of abstraction and realism creating a satisfying dreamy incoherence.  Also hard to ignore are Niko Doezema’s two five minute films playing opposite each other. Both silent, one in color one in black and white, these films are a playful homages to the filmmaker’s inspirations, namely, Kubrick’s The Shinning and early to mid twentieth century German expressionism. The films are filled with: vampires, revenge, developing insanity and what the artist describes as “daemons”. Although somewhat jocose subjects, the cinematography is intriguingly well crafted.  While staying true to his age and shamelessly evoking famous scenes from horror movies past, the camera-skills show real promise and a natural feel for what makes a watchable and stimulating film.

All in all, the show is interesting, enjoyable and satisfyingly creative. Most of the pieces are impressive, thought provoking, and show the individual artist’s skill in their chosen medium. The show’s size makes it possible to view every piece and read the artists’ descriptions of each work in the Gallery Guide (which I strongly suggest one does, given how illuminating these descriptions can be in showing the state of mind of the artists). Although each piece is hit or miss, there is something there that will appeal to everyone.  The show reveals these young artists’ potential. On a whole, the show does have an experimental, “they almost hit the mark” kind of feel that often characterizes student work (while I probably would not have guessed high school students), but this is not a bad thing considering these artists are just at the beginning of their curatorial and professionally artistic lives.  One leaves the show with a sense of how cool these kids must be, definitely the kind of kids I would have wanted to be friends with in high school.

Written by Sophie Engel
Intern with the Education Department