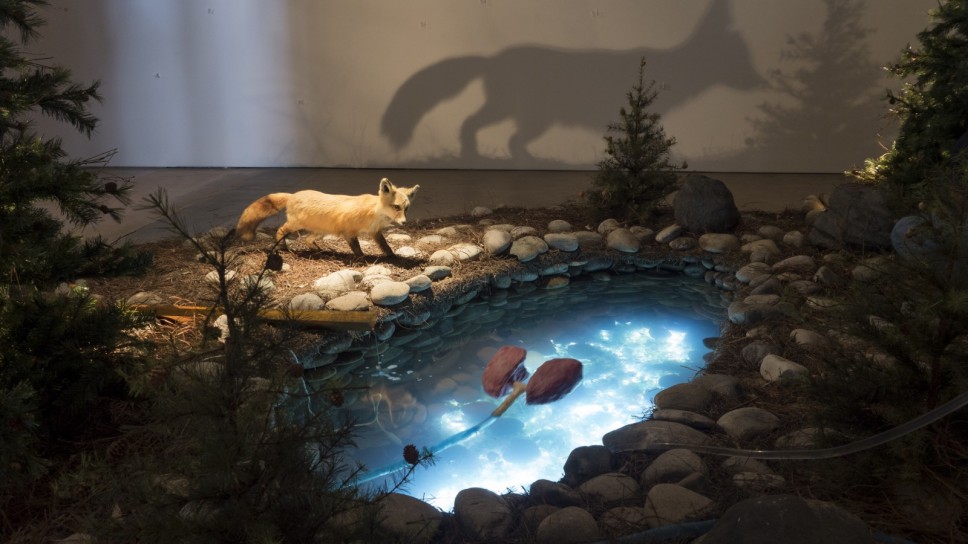 Kiersta Hsi is an intern in the Education Department at SITE. This fall she will begin her last year at Vassar College, where she is studying Chinese and Studio Art.

Last month, SITE opened its newest exhibit, Enrique Martinez Celaya: The Pearl. So far, for me, the greatest perk of working for SITE Santa Fe this summer was being able to actually listen to the artist talk about his work in person and then observing him walk around the museum, thinking and tweaking the exhibit into perfection. Enrique Martinez Celaya, a Cuban born artist who, as a child, was moved around to several places, is known for creating environmental pieces that often deal with impermanence, exile, and memory. In this show, Celaya took the exhibit one step further and actually turned the museum itself into an environment.

During the special VIP opening of SITE’s newest show, the interns were invited to listen to Enrique Martinez Celaya talk about the exhibit, calling it his first autobiographical show, a term that he normally denies about previous pieces. As Enrique led us into the environment, it remained pertinent that the show follows a specific path and that each piece in the galleries was especially designed for the space in SITE Santa Fe.

This show is particularly wonderful because upon entering the first black curtain that separates the outside world and lobby from the inner environment of the artist’s creation, the viewer at once feels that when the curtain closes a rather intimate yet distant journey into Celaya’s memories has begun.

The journey through the museum is an exciting melding of multiple mediums, beginning with a video that creates a striking visual and auditory experience as we watch a German Shepherd devour food within a wooden doghouse. As we enter the curtain upon which the doghouse is projected, we find ourselves walking into a literal forest composed of the Casuarina Pines, a tree that was introduced into Cuba and whose population has rapidly expanded. The artist motions for us to look up at a clear hose that twists throughout the galleries that will serve as a marker for the specific path we are to follow.

As we follow the pathway laid out by the hose, the sounds from the exhibit enhance the refined visuals and fully absorb the viewer into this constructed environment. The auditory tracks of the dog eating inside the doghouse, ocean water, Enrique’s first musical composition, and various other sounds further separate the viewer from the outside world and heighten the feeling that they are walking through the artist’s memories or the remains of those memories.

The hose eventually feeds into the foot of a young boy who is crying above a nest of pine needles. This part of the exhibit is especially breathtaking, as the viewer can engage with the action of the tears spilling out of the sculpture’s eyes and then admire the way the Casuarina pine nest/trough, which is responsible for carrying the tears, mimics the painting that sits behind the sculpture of a boy. The continuation of the image from the painting beautifully intertwines a 3-D sculpture with a 2-D painting of Enrique’s memory of the Caribbean.

In a continuous circular structure, the trough of tears eventually feeds into a pond that was actually built into the gallery floor! Upon looking into the pond, the viewer sees a pair of lungs connected to medical-looking equipment, which then fills the hose with the water that circulates through the museum. This entire room reaffirms that this is a constructed environment, really drilling the message in with these man-made, life saving medical devices. Furthermore, it sums up the idea of breath and breathlessness, a direct link to Enrique’s experience as an asthmatic.

Although a viewer can hear a lot about the finer details of the show between the information plaques and the brilliantly informed SITE guides throughout the galleries, hearing the voice of Enrique describe his ideas, memories, and connection to each room was extraordinarily special. Not only did we get to glimpse into his inner workings and relationship to the exhibit, but also we were able to interact with his more mysterious and reserved side. At the end of the VIP tour a member of the audience asked about the meaning of the number five, a reoccurring theme throughout the show. Taking a moment for an inner debate, Enrique explained that this was one of those questions he wouldn’t answer, despite the number being significant enough for him to include several times. Despite this show holding autobiographical meaning for Enrique, it is still important that viewers enter the space and take the time to have their own experience of what they see, hear, and feel, without every little detail being pointed out and explained.