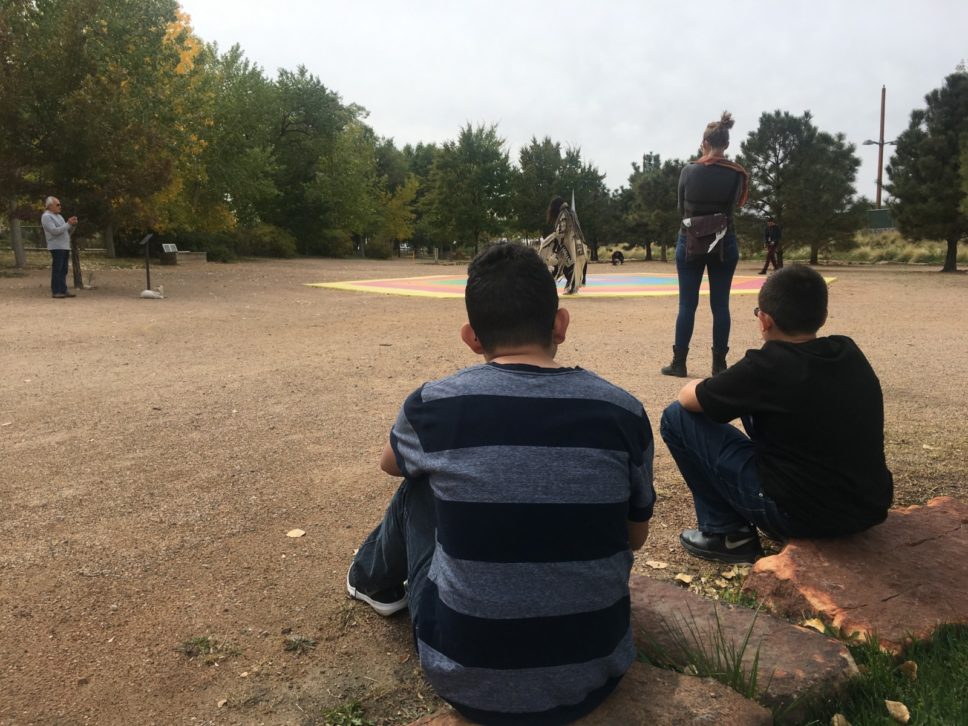 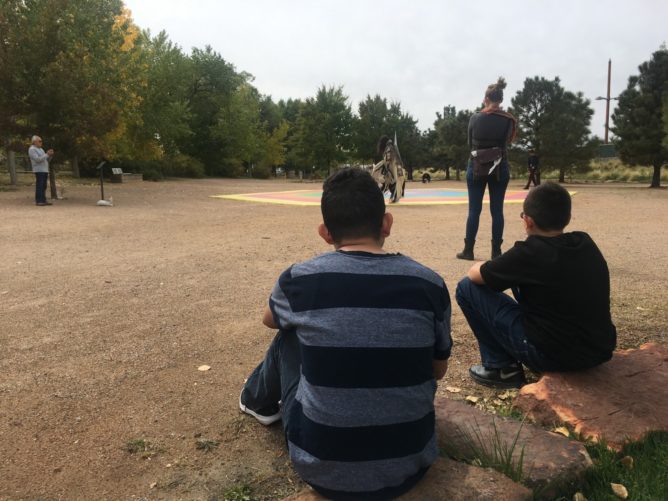 As Eric-Paul Riege’s performance continues, he leaves the hooghan and begins to travel outside the museum walls.

Riege moves forward with wings flapping up and down, and metal aglets swaying.  He no longer walks along the perimeter of the hooghan, but of the SITE building itself.  He is sweeping the earth with noise as he walks.  His destination is “Galactic Playground” by artist Eduardo Navarro, another contemporary work in the Casa Tomada exhibition.  Riege approaches the piece and begins a familiar practice of walking in a circle around the perimeter.  Strikingly different, however, is the form of “Galactic Playground”, which consists of concentric hexagons of bright paint on the ground, forming a bullseye. Both installations share a similar circular form, and this duality of shape across cultures will come to create amazing connections for myself as an audience member.

Riege begins to interact with Navarro’s work by walking around the perimeter.  But when he reaches his starting point around the circle he moves one layer closer to the circles center. This practice continues until he reaches the inner-most hexagon at which point he begins to spiral back out, one layer at a time.  “Galactic Playground” is much more colorful than the unsaturated palette of Riege’s hooghan, but Eric-Paul walks around it with the same concentration and reverence.

As I sat and watched, I was overtaken with memories of my first experience walking a labyrinth on the campus grounds of Colorado Springs College. The Labyrinth Society states; “a labyrinth is a meandering path, often unicursal, with a singular path leading to a center. Labyrinths are an ancient archetype dating back 4,000 years or more, used symbolically, as a walking meditation, choreographed dance, or site of rituals and ceremony, among other things.”

Walking a labyrinth is a very peaceful experience.  There is nothing to do but look, walk, reflect, and think.  It was unclear whether or not Riege was walking Navarro’s work like a labyrinth or just like a path.  His actions were accompanied with no word for the entire four hour duration and no explanation was offered before or after.

Culturally there is a lot to learn, in order to understand the significance of all these working parts.  Labyrinths are present in a multitude of histories dating thousands of years back in Europe and the Americas alone.  Their designs are varied and their purposes change for different instances and uses.  To the O’odham of North America, the “Man in the Maze” is both a story and symbol that features a unicursal labyrinth.  The “Man” is known as Iʼitoi or Iʼithi depending on the dialect.  The “Maze” is representative of the passage one takes through their life.

Watching a Diné artist perform across an Argentina artists’ installation, there is a wonderful sense of global togetherness.  The unshakeable truths of living on Earth; such as time, the sun, and the cycles of nature are shared.  I get a little existential and quite excited to see these universal principals expressed across different forms and languages.

As Riege finished his walk around “Galactic Playground” he leaves to return inside SITE, to his own hooghan, for the end of his performance.  It is then that he begins to personally engage with his audience one on one.  An experience to be depicted in part three.