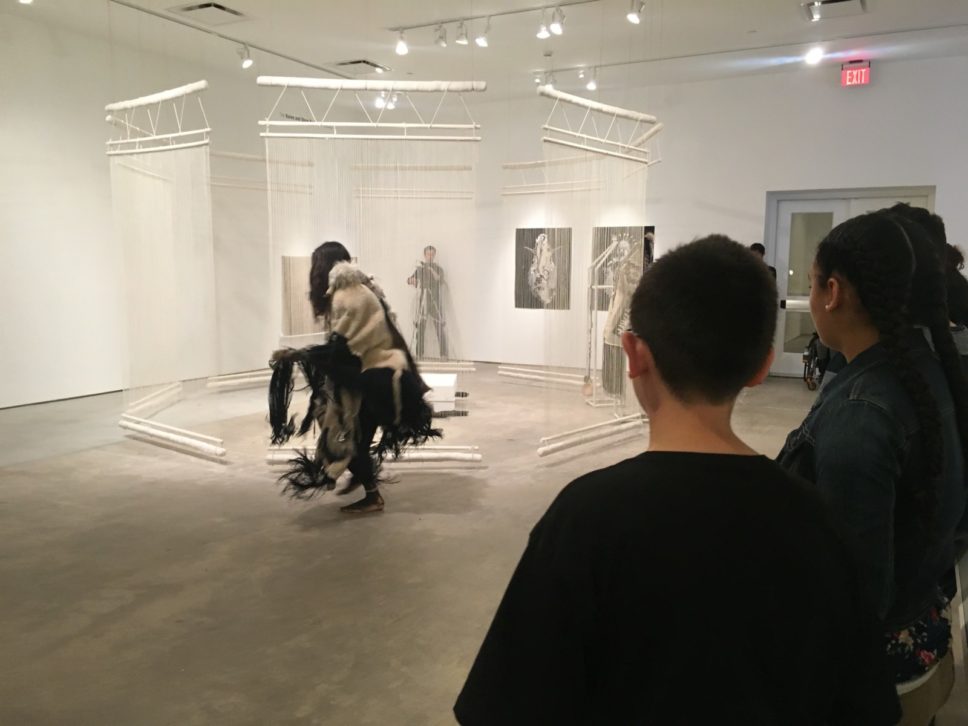 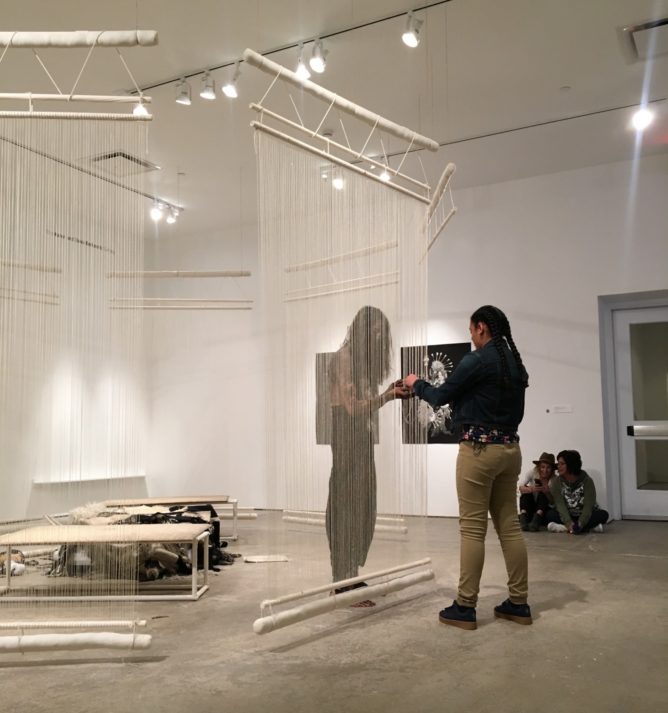 In English, the title of the book is “House Taken Over.”

Eric-Paul Riege is an artist whose work sets up shop and shows us a thing or two.

In honor of his Diné upbringing, Riege has created a hooghan out of seven hanging vertical looms.  This work, currently on display at SITE Santa Fe, is inspired by the Diné story of Na’ashjé’íí Asdzáá, or “Spider Woman”.  For those who are unfamiliar, a hooghan, in Diné culture, refers to a specific form of dwelling which literally means “the place home”.
Per my limited internet research, a hooghan has specific rules on what materials it can be made out of, what direction the entrance faces, how the trees (which make up the roofing) must face, and more.

Though structurally less permanent, Riege’s hooghan places a home inside of SITE.  Even without the artist present, the work maintains a strong presence and space within the gallery.  The craftsmanship is astounding.  The garments are comforting to the eye and are begging to be worn.  The looms divide the space gracefully.  One can see inside the hooghan and does not feel excluded, but senses the care that went into this space and should know not to barge in like “a bat out of hell”.

This house lives on without the artist present, but when he returns, it becomes his.  Suddenly the meditative silence of a floating hooghan is cut apart by the knocking and smacking of large stick on flat cement. Riege shuffles around the hooghan in a clockwork motion; using two soot covered branches as walking sticks. He moves more hunched than an elephant, and looks like lightning struck a dead tree to life.

Returning to the hooghan on the first of many occasions, Riege places down the branches, he puts on the first garment, and then later, the second.  He continues to travel clockwise, his movements sway across the floor.  Belaboring over a short 100 foot circle, he drags out the simple task of walking into a glacial dance.  Slow and steady sets the pace.

Riege’s second garment gives him long wings with longer braids.  Tassels and string drape beyond his winged arms and end with aglets; little metal tips.  As I watch him circle the same path for a fifth or sixth time I am struck by his motions feeling more and more animal.  He has become a great bird flying slowly and comfortably.  The wings of the bird drag across the ground.  I close my eyes and listen as his metal wings make the sounds of the ocean.

This marks the first half of Riege’s performance on October 12th 2018.  In the second half, the work breaks beyond the confines of the gallery walls to explore relationships of culture with the work “Galactic Playground” by artist Eduardo Navarro.