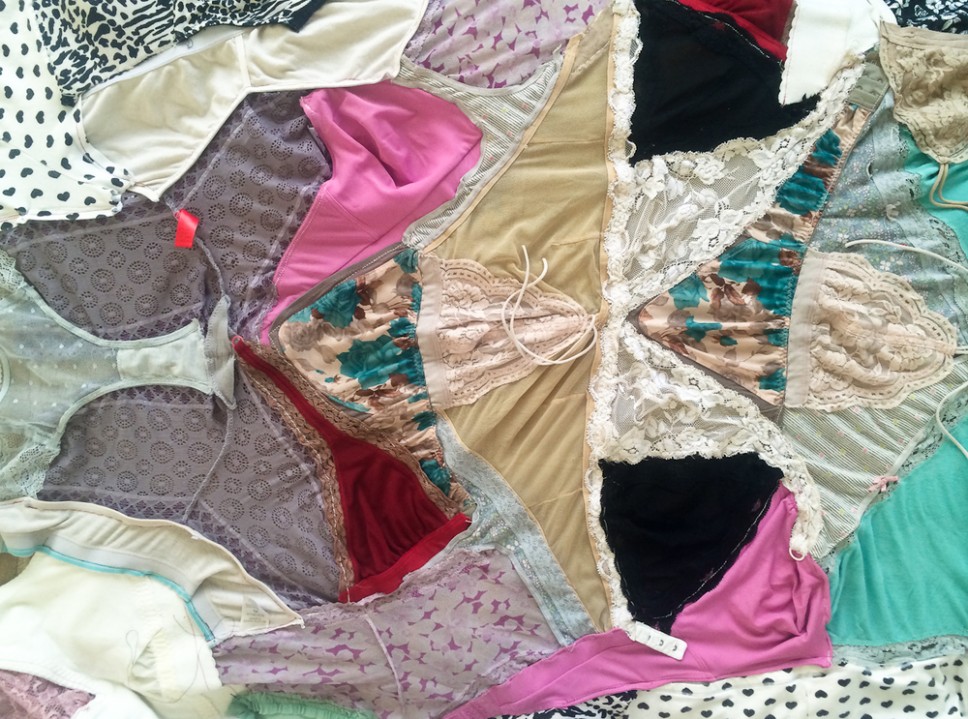 This piece has certainly taken time. The time it takes to fuck up over and over, “breaking” the sewing machine every few minutes, deciding that I don’t want to make it, and then months later deciding that I definitely need to.

I started with a couple of old bras and some panties of mine that I never wore. I’d had them since high school, meaning at least 7 years. I thought they were so beautiful that I needed to hold on to them. I hoped that eventually they’d serve some sort of purpose. Finally, one day I cut them apart and began sewing them back together. The pieces came together to form a somewhat kaleidoscopic mini-quilt, delicate, pale, and transparent. For the piece to grow I would need more material to work with, for I imagined the piece as a large-scale quilt or wall-piece. This meant more than a simple few pairs of underwear. I began by asking my girlfriends and female family members for their own “bottom of the drawer” undergarments. I was happy to find that I was not alone in holding on to my old panties.

As I continued to stitch our underwear together I liked that our intimates, particularly the ones that don’t generally make it on stage, would connect us all. I envisioned a web of connections, like a constellation placing us all as a small spark in a larger whole. Occasionally I catch myself in situations where I feel so at home in the presence of people whom I never would have imagined myself close to. Sometimes connection forms without me asking for it. And so I sewed my friends together.

I quickly exhausted my readily available resources. Fortunately, during a trip to Austin, a good friend of mine introduced me to the outlet mall of thrift stores. No vintage YSL, no organization, not even hangers, just rows of giant bins containing masses of pre-worn (probably) unwashed garments of all sorts. In the back were some old vacuums and boom boxes—so I suppose there was some organization. I tore through the lumps of rejected clothing, bin after bin, fortunate that I was likely the only person seeking out nothing but used undergarments. This is where I bought 8lbs of underwear, soon to become the outer rim of my now circular quilt.

Like a tree connects time, my piece has three rings. It expands from the central core, beginning with of pieces of my own, connecting then to my friends and family, which finally branch out to those we have yet to, and will never know. 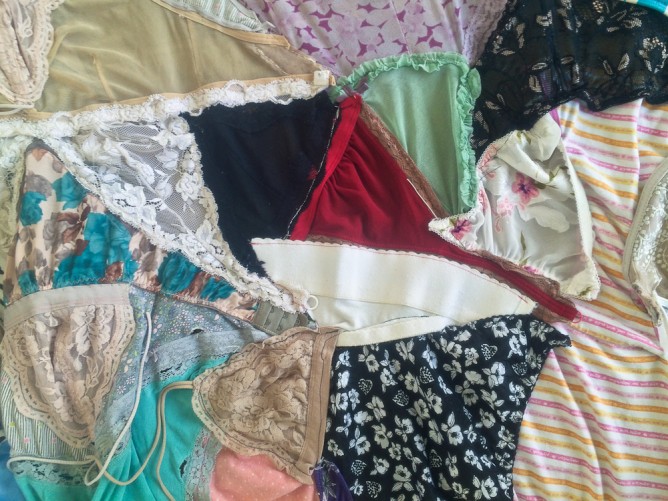