Jamison Chas Banks is a multi-disciplinary artist who creates films, paintings, performances, and installations. His works often explore the history of war and territorial expansion, both literal and psychological. Banks appropriates and alters symbols employed in propaganda and popular culture and redeploys them in contexts that subvert their original meanings.  He usually begins with an area of investigation that spawns a series of interrelated artworks in different media. For example, during his residency at the Museum of Contemporary Native Arts, Santa Fe in 2013 Banks created a film, screen prints, and a performance as part of the project Territories: The Frontier. Initially inspired the history of service in the armed forces by members of the artist’s family, this project explored the recent wars that the United States has been engaged in not as singular incidents, but part of a cyclical history.

For Unsettled Landscapes, Banks was commissioned to create a new installation, the first chapter in a larger project that will culminate in a film.  Retour des cendres Vol. 1 (Return of the Ashes) explores the interrelationship between the Louisiana Purchase, Napoleon’s exile, the exile of the Cherokee in Oklahoma and the artist’s own Cherokee/ Cayuga- Seneca family history.  A few key facts and artifacts animated this project: in 1803 Napoleon sold the Louisiana Territory to the United States which included the present day state of Oklahoma as well as parts of 14 other states; it was the single largest acquisition of land made by the United States; In 1821 Napoleon died in exile on the island of St. Helena; in 1830 the U.S. Congress passed the Indian Removal Act which instigated the exile of the Cherokee, among other native nations; Banks encountered a photograph of his grandfather’s baseball team; playing baseball was a source of greater mobility and freedom for  the artist’s grandfather.  Known as “America’s favorite pastime”, baseball is used as the controlling metaphor to explore issues of contested territory in Return of the Ashes. In the installation we encounter just a few elements— a scoreboard with a map of the United States, a vintage French flag, a baseball with Napoleon’s signature—presented as artifacts from a game played between the “Exiles” and the “Purchasers” in which the Exiles seem to be losing.  While the game appears to be frozen in time, closer inspection shows that there are still more innings to be played, and therefore the possibility of a change of course. 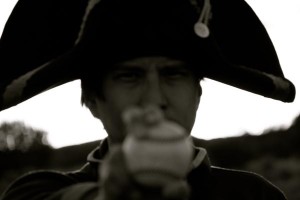 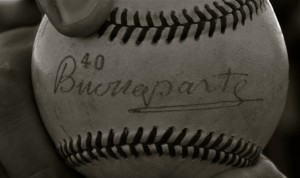 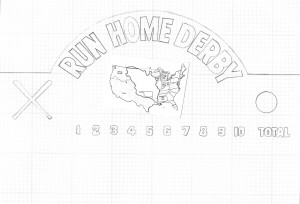