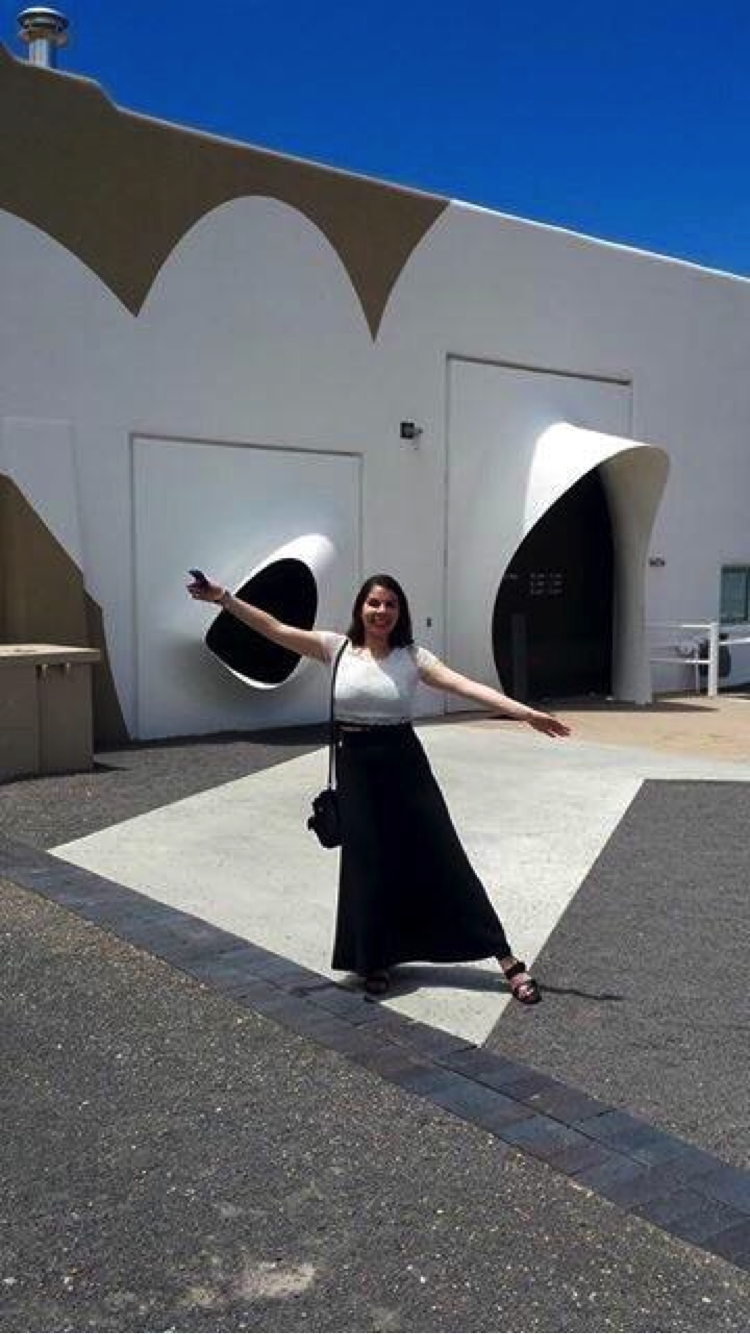 Haley Jones is an undergraduate at Oberlin College. She worked as an intern in SITE’s Education and Outreach Department during the summer of 2015. Below she reflects on her experience at SITE upon completing her internship.

This summer SITE Santa Fe opened an exhibition called Unsuspected Possibilities, a title that applies startlingly well to my internship experience in this edgy contemporary art space. The fact that I became an intern at SITE was unsuspected from the start. I go to college in Oberlin, Ohio but I live in Anchorage, Alaska; I had no prior internships on my resume; and I had never even been to Santa Fe until l I first set foot on the Santa Fe University of Art and Design campus that I would call home for two months. As an art history major and volunteer gallery guide at my college, I wanted a summer internship at a museum but didn’t totally understand what that would mean for me. Becoming an intern at SITE was an adventure in every aspect.

I began my internship with the Education Department with very little idea what to expect, but I was not disappointed with the jobs I received. From the outset it was clear that I was not here to be pushing papers or executing only the most menial tasks. Instead, I was treated as a member of a team, capable of valuable contributions. I was immediately given the opportunity to create SITE Zines and write blog posts for SITE’s Outreach Hub. The relationship I established with my supervisor, Amanda Lee, was perfectly balanced: I was free to come to her with any questions I had, but I had enough independence on each project to let my individual work ethic to shine through. I tackled larger tasks with my fellow Education intern, Tegan Whitney, who became a great friend. The working environment at SITE allowed my cooperative, writing, reasoning, organizational, and creative skills to flourish beyond belief.

Just as I began to get comfortable in the Education office, a new challenge appeared, catching me by surprise: the Exhibitions crew needed all the help they could get with assembling SITE’s summer installations, particularly “the common SENSE – the animals” by Ann Hamilton. Suddenly I was devoting all of my efforts to this massive project, whilst forming fantastic relationships with my fellow interns and SITE Guides, and even working with Ann Hamilton herself. Bringing “the common SENSE” to SITE gave my internship an entirely different dimension, in which I became an active participant in the very artwork that I had been studying and writing about for weeks. Read more about this process in my Outreach Hub post, “Installing ‘the common SENSE’: An Intern’s Perspective.”

The excitement of my Exhibitions work flowed seamlessly into the hysteria of Gala week, when SITE hosted its biggest events of the summer. I wiped away the dust of my Exhibitions work and donned my most glamorous shoes to tiptoe into the world of the Events and Development departments. Attending the exclusive 20th Anniversary Gala and Auction, a magnificent occasion with an all-white dress code, was something I could never have dreamed of. Seeing firsthand the meticulous detail and teamwork that goes into producing such an elite event was awe-inspiring. During Gala week, I was hit full force with the importance of SITE Santa Fe to the contemporary art world, and how lucky I was to be a part of it.

A major feature of my entire internship experience was the plethora of opportunities all the interns had access to throughout the summer. We sat down with SITE staff members to discuss their career paths and their functions in this nonprofit museum. We talked with every single artist exhibiting in SITE 20/20 Summer or Unsuspected Possibilities to discover what inspired them and ask questions about their work. We visited an artist’s studio (Lawrence Fodor), an opera (the Santa Fe Opera’s La Finta Giardiniera), a new media festival (CURRENTS), and two installments of SITE’s “My Life in Art” (Ann Hamilton and Marilyn Minter). We met with other Santa Fe interns from institutions such as the Botanical Garden and the Georgia O’Keeffe Museum. We served as SITE Guides when the exhibitions opened, giving me the chance to converse with visitors about everything I had learned. I had no idea that an internship with SITE would be so rewarding. The Education department did everything possible to make all of our hard work worthwhile, giving us insight into the inner workings of museums.

When I stumbled into Santa Fe for the first time, trusting that SITE would turn my summer into something amazing, I had no idea how well placed that trust was. My internship has taught me many things. It has confirmed that I want to pursue a career in museums. It has taught me how to live and thrive on my own in a new city, skills that will be of service when I study abroad in Italy in the spring. It has also gifted me with an appreciation for contemporary art that is invaluable for me as an academic. But the best part about my time at SITE was the people behind it. My colleagues, from interns to SITE Guides to staff members, have provided me with constant inspiration, appreciation, and guidance. They motivated me to abandon my initial nervousness in favor of confidence. I highly recommend a SITE internship to anyone interested in a career in the arts. My future is filled with unsuspected possibilities; the knowledge I gained at SITE Santa Fe will help me make the most of them.