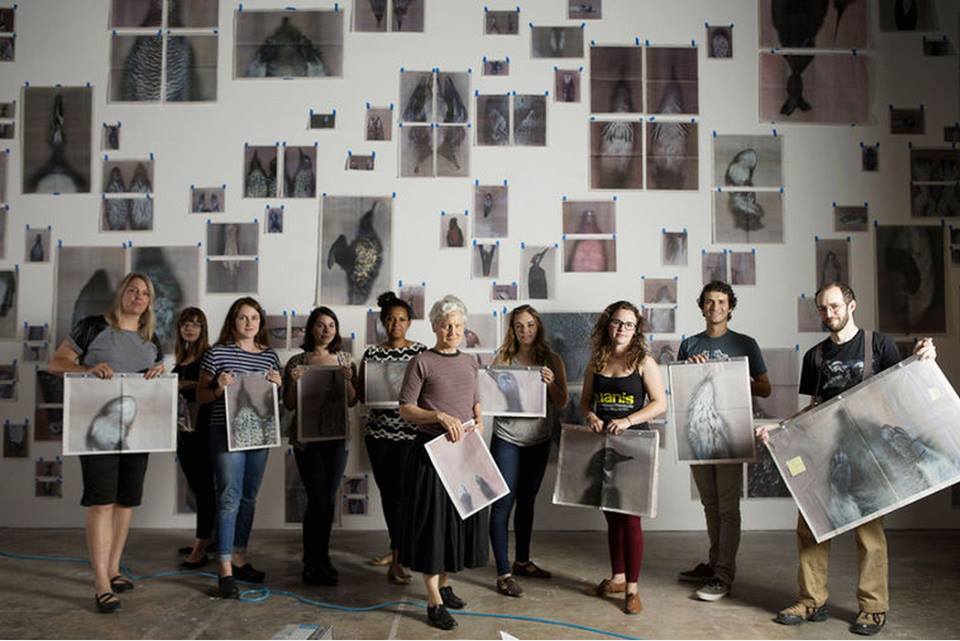 As a first-time intern in the Education Department of SITE Santa Fe, I only had a vague idea of what I was getting myself into. I anticipated giving tours to school groups, updating SITE’s website, and participating in programs such as the Youth Development program. What I did not expect was what I spent nearly a month doing: setting up the enormous, elaborate, and elegant installation the common SENSE – the animals by Ann Hamilton for SITE’s 20 Years/20 Shows: Summer exhibition.

The 20/20 series of shows is a look back on SITE’s 20-year history and the artists that made it possible, inviting them to return and contribute something new. Ann Hamilton exhibited at SITE for its First International Biennial in 1995, Longing and Belonging: From the Faraway Nearby. In a boxcar beside SITE’s main building, she presented a video installation called SALIC. The videos included moving hands and silhouettes, eerie and obscure – not entirely dissimilar to the aesthetic she now brings to SITE twenty years later.

The common SENSE premiered at the Henry Art Gallery last year in an installation that overtook the entire museum. The adapted edition at SITE, though smaller, gets to the heart of Ann Hamilton’s visceral message. Upon visiting the Burke Museum of Natural History and Culture at the University of Washington, Hamilton became fascinated with the animal specimens available for research. These preserved bodies of mammals, birds, and amphibians, in tandem with literary sources such as Aristotle’s De Anima and Historia Animalum, inspired Hamilton to craft an installation focusing on the sense of touch as a common link between species.

What makes the common SENSE meaningful is not its subject matter so much as the choices Hamilton made in presenting it. She selected hundreds of specimens and pressed them to the surface of low-quality color scanners, producing ethereal, blurry images. This process ensured that only the underbellies, claws, webbed toes, and feathered breasts of animals that contacted the scanner were rendered sharp, forcing the viewer to focus on the tactile nature of these vulnerable bodies.

Rather than print these images on glossy paper to be framed as photographs, Hamilton made a crucial decision that defines the installation. Each image was reproduced thousands of times on thin newspaper in order to be bound into thick stacks and mounted on a wall, allowing visitors to tear off individual sheets of any image they wish to keep. Such an interactive element may surprise museum visitors who have always learned to avoid touching objects on gallery walls. If enough people choose to tear away a particular image, the possibility exists that eventually, none will remain, and a blank space will appear on the wall – a mournful reminder of the very real issues of biodiversity loss and humanity’s sometimes catastrophic impact on the environment.

An installation this ambitious and this profound was nearly enough to overwhelm our small contemporary art museum. We were confronted with hundreds of thousands of sheets of paper in need of sorting, organizing, binding, and mounting. An all-hands-on-deck mentality took hold over SITE’s staff and within a few weeks, a team of interns and SITE Guides took up the challenge of installing the common SENSE. I had the privilege of being part of this team from start to finish, and though unexpected, it was a phenomenal experience.

The images came to us organized by size – the smallest were about the size of a letter, and the largest were often too heavy (in their final stacked form) for one person to carry. We began with the task of separating different images and sorting them into stacks of hundreds. This operation alone took several days. We became familiar with the intricacies of each animal, the uncanny details of fur and fingers that seemed strangely human, and the residue of newsprint on our fingers. After creating the stacks, we began classifying them by wall, according to a layout Ann Hamilton provided. Each wall was crowded with images from floor to ceiling, emphasizing the variety of species rather than specific individuals. Ann was able to make adjustments to the layout, and then the mechanical part of the project could begin.

Binding the stacks to their metal plaques gave me my first exposure to power tools. We formed an assembly line of hole-punching, bolt-drilling, and Velcro-taping until each stack was ready to be mounted. A cooperative spirit prevailed, and I became great friends with the SITE Guides and interns involved. Placing every stack on the wall was a feat more easily said than done. For the highest pieces, tall ladders or even motorized lifts were necessary. Gradually, the walls became fuller and fuller, and in time we felt the enormous triumph of finding and mounting the final images. At last, the common SENSE was complete and ready for public viewing.

Perhaps the best part of this long and labor-intensive journey was that Ann Hamilton herself joined us for its majority. I had never worked with an artist in my life of her caliber. At first I was star-struck and disbelieving as she asked me to find missing images for her, because only weeks before, I spent hours researching her life and work. Throughout the project, Ann was incredibly kind, cooperative, and inspiring. She treated us as trusted colleagues, sharing in our setbacks and struggles, but ultimately propelling us forward to successfully fulfill her artistic vision. My involvement with Ann was a privilege that I never could have foreseen when I began my internship.

SITE’s “First Look” event on July 15, an exclusive first viewing of SITE’s summer shows, was an almost surreal occasion. After a month of hard work, I watched guests explore the common SENSE, cautiously tear off the very sheets I helped organize, and compliment Ann on a wonderful installation. I witnessed people touch and be touched by these animals I had spent so much time with. I felt compelled to share in the installation’s new life, and tore off a sheet depicting two dark-colored birds, heads and necks blurred past recognition, breasts flecked with tiny white feathers as delicate as snowflakes. I will take it home with me not only as a beautiful image, but also as a reminder of my time at SITE Santa Fe.

During the assembly process, Ann continually pondered how many sheets of paper the team must have touched. (Probably many thousands!) She was catching on to the unique and intimate relationship each of us formed with the piece, and how our individual experiences are manifestations of what her installation is capable of accomplishing. I highly recommend visiting SITE this summer to see, and feel, the common SENSE for yourself.

Summer 2015 Intern for the Education Department