SITE Santa Fe nurtures innovation, discovery, and inspiration through the art of today.

SITE Santa Fe creates significant experiences for visitors by presenting the most innovative visual art of our time in new and engaging ways.  Since its opening in 1995, SITE Santa Fe has been committed to supporting new developments in contemporary art, encouraging artistic exploration, and expanding traditional museum experiences. SITE’s year-round schedule of exhibitions serves as a platform for experimental curatorial approaches, innovative exhibition design, and projects by emerging and established artists. SITE also hosts an Art & Culture series of lectures and performances, as well as an extensive education and outreach program for local schools, all of which attract 20,000-30,000 local, national and international visitors.

Launched in 1995 to organize the only international biennial of contemporary art in the United States, with founding director and curator Bruce Ferguson, SITE soon expanded its programming to include exhibitions year round, often accompanied by highly acclaimed catalogues. SITE has since presented nine international biennial exhibitions. Each has drawn global attention and brought important contemporary art to the Santa Fe community and beyond. Conceived to bring the global contemporary art dialogue to the art-rich Southwest, and as a major event on par with such renowned exhibitions as the Whitney Biennial and the Venice Biennale, it has become an integral event for contemporary art aficionados, attracting many visitors from around the world. Past biennial curators have gone on to hold significant roles in the contemporary art world, a testament to SITE’s forward-thinking vision. Following their SITE Santa Fe Biennial guest curatorships, Francesco Bonami (1997), Rosa Martí­nez (1999) and Robert Storr (2004) were chosen to organize the Venice Biennales in 2003, 2005, and 2007, respectively. Dave Hickey received the coveted MacArthur “Genius Award” after organizing SITE’s Biennial in 2001. Klaus Ottmann (2006), Lance Fung (2008) and Sarah Lewis and Daniel Belasco (2010) have all garnered significant praise for their respective biennials, and have gone on to exciting posts and projects worldwide.

As SITE Santa Fe marks 25 years as one of the most unique and influential contemporary art spaces in the United States, we welcome you to our expanded building designed by SHoP Architects. Over the course of 2016/17 we renovated and expanded our original beer warehouse home creating a space that reinvents our institution and brings a distinctive building to Santa Fe’s landscape. Our new building allows us to increase our capacity to engage the city of Santa Fe and beyond with dramatic new spaces for art, programming, and gathering.

SHoP Architects created a design for SITE that provides elegant new spaces within the building and an iconic new form on the exterior of the building. Their design is distinguished by a perforated metal cladding that unifies SITE’s original building with new additions in both the front and the back.

In the Spring of 2015, SHoP’s design plans for SITE were approved by the Santa Fe Railyard Community Corporation Design Review Committee. In early summer 2016, our Campaign Fundraising goal reached 75%, and our building permit was issued. Just a few months later, our project broke ground with Board, Members, neighbors, and Railyard and City officials on hand to celebrate. In the fall of 2017, we completed construction and opened our doors to the public. 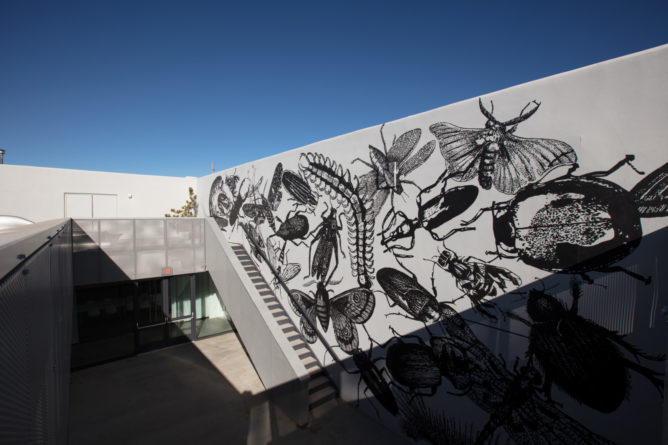 Regina Silveira’s powerful graphic interventions explore perspective, shadows, and spatial relationships. Her works are site-specific and engage both interior and exterior architectural spaces. MUNDUS ADMIRABILIS, 2007/2017, creates a sense of frenzied movement within SITE’s new building with giant digital renderings of insects swarming across windows, walls, ceilings, and outdoor spaces. These creatures that are usually hidden are now overhead and underfoot conjuring associations between biblical plagues, the ills of the modern world such as corruption and degradation, and perhaps prophesize a future when only the resilient cockroach or prehistoric centipede will survive. This work was part of Silveira’s contribution to SITE Santa Fe’s Future Shock exhibition in 2017, and is courtesy of the artist; Alexander Gray Associates, New York and Luciana Brito Galeria, São Paulo.
Learn More

Kiki Smith’s work recurrently addresses notions of the human body as a receptacle for knowledge, belief, and storytelling. In the 1980s, Smith turned the figurative tradition in sculpture inside out, creating artworks based on organic networks and systems that incorporate animals, domestic objects, and narrative tropes from classical mythology and folk tales. Back Porch Whispering reflects these precedents as well as her upbringing by her father and fellow sculptor, Tony Smith, who often enlisted her assistance in creating cardboard models of his formalist, geometric sculptures. Here Smith replicates his geometric approach, but in a more naturalized manner. Back Porch Whispering‘s title and formal properties suggest an affiliation with wind and wind chimes, while the pair of birds, representing the artist and her husband, serve to heighten this reference. 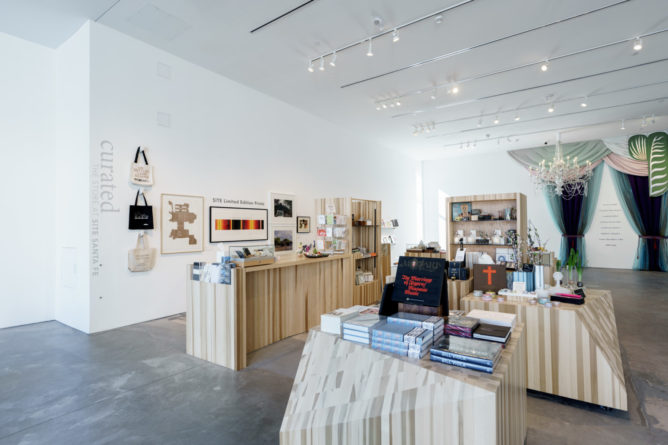 Visit in person to browse the full array of merchandise or shop a selection of items online. To set up a private shopping experience, call or email Store Manager Yon Hudson at 505.989.1199 x34 (hudson@sitesantafe.org). 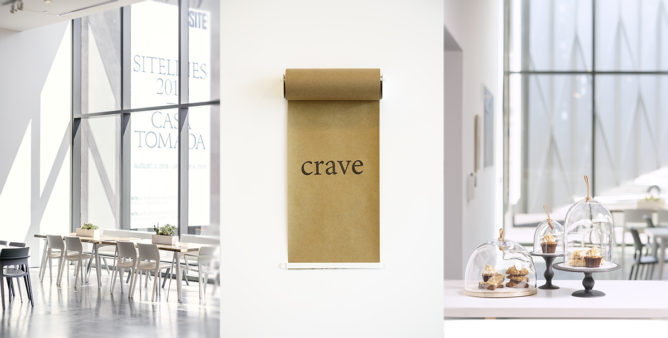 At our front desk you will encounter crave, SITE’s snack and coffee bar offering refreshments and snacks.

SITElines: New Perspectives on Art of the Americas 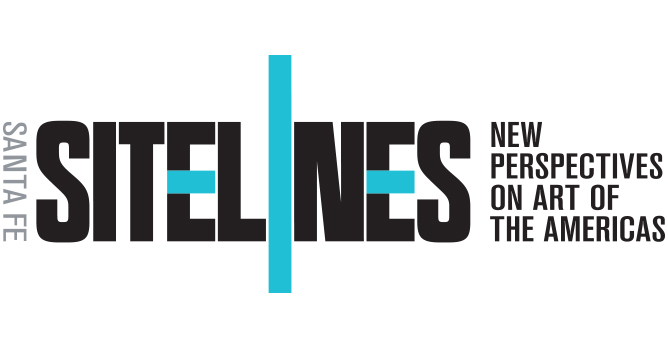 SITElines signifies a radical rethinking of SITE Santa Fe’s signature biennial exhibition, originally established in 1995. It represents a collaborative structure for planning its biennials, a vision for continuity between biennials, a commitment to community and place, and a dedication to new and under­recognized perspectives. This new multi­dimensional approach—together with a strong geographic focus—redefines SITE’s role at the forefront of biennial exhibition making and proposes new curatorial frameworks for biennials globally.

SITElines was a multi-year commitment to a series of linked exhibitions with a focus on contemporary art and cultural production of the Americas. The exhibition series debuted in 2014, with the first edition Unsettled Landscapes, in 2016, with the exhibition, much wider than a line and 2018, with Casa tomada, and was organized by a different team of curators for each edition, from locations throughout the Western Hemisphere. Through SITElines, SITE Santa Fe also established a new programming hub called SITEcenter to generate connectivity between and during the exhibitions.

A new biennial exhibition series that explores contemporary art from Nunavut to Tierra del Fuego   July 20, 2014 – January 2015 Opening Festivities July 17-19 SITElines: New Perspectives on Art of the Americas is a six­-year commitment to a series of linked exhibitions with a focus on contemporary art and cultural production of the Americas. The exhibitions will take place in 2014, 2016, and 2018 and will be organized by a different team of curators, from locations throughout the Western Hemisphere. Through SITElines, SITE will establish a new programming hub called SITEcenter to generate connectivity between and during the exhibitions.

SITElines.2016
much wider than a line

SITElines.2016 opened on July 16, 2016 as the second installment in SITE Santa Fe’s reimagined biennial series with a focus on contemporary art from the Americas and featured 35 artists from 16 countries and 11 new commissions organized around intersecting ideas brought together by a team of five curators−Rocío Aranda-Alvarado, Kathleen Ash-Milby, Pip Day, Pablo León de la Barra, and Kiki Mazzucchelli.

This exhibition, entitled much wider than a line, was an articulation of the interconnectedness of the Americas and various shared experiences such as the recognition of colonial legacies, expressions of the vernacular, the influence of indigenous understandings, and our relationship to the land.

much wider than a line took its title from Leanne Simpson’s, Dancing on our Turtle’s Back, a book about life ways of Nishnaabeg people. In her accounts of non-colonial conceptions of nationhood and sovereignty, it is the joint care taking required in the overlapping territorial boundaries between one Indigenous nation and another that are traditionally relationship-building. The relationships that emerge are, like the borders themselves, much wider than a line.

The title of SITElines.2018 references Argentine writer Julio Cortázar’s 1946 short story “Casa tomada” (House Taken Over), which follows two shut-in siblings devoted to the care of their ancestral home. As a mysterious and unnamed presence begins to occupy parts of the house, they are eventually forced out onto the street without any material possessions. The exhibition plays off the ambiguities of this story, addressing the reciprocal and complex relationship between the ones who stay and the ones who leave, and those that belong and those that are outliers.

Questioning notions of private property—of the body, mind, land, and culture––the exhibition asks how boundaries are dissolved and/or violated. Why do we create these divisions? What marks the difference between guest and trespasser? Who is the host and who is the visitor, and when are these roles reversed?

The gallery below features images from the launch announcement events of SITElines in New York City and Santa Fe.