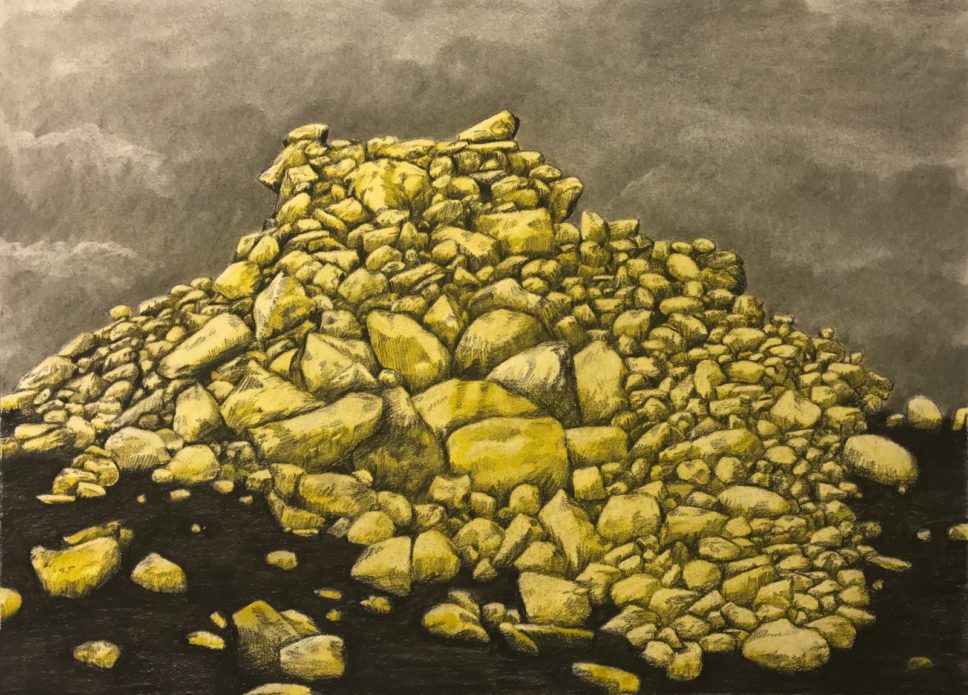 What Endures features a collection of drawings from three bodies of work created over the past decade. These works highlight some of the most environmentally impacted and economically important places on earth, question what is sacred, and explore the artist’s practice of “bearing witness” to the world.

Using unique pigments such as radioactive charcoal, industrial waste, pulverized meteorites, and forest fire ash, Elder creates large-scale meticulous drawings that illuminate the contemporary landscape and call attention to the environmental impacts of industry, military, economy and policy. Elder’s drawings document the disconnect between the scientific and the sacred and function as memorials to displaced mountains, felled trees, and disrupted ecosystems.

Also included in the exhibition are seven drawings of meteorites that have been removed from Indigenous communities. Made through cultural consultation with Indigenous leaders, Elder’s drawings record the unscrupulous acquisition of these celestial rocks, and illuminate the void that remains when the extractive demands of science are prioritized over cultural values.

Elder’s newest body of work takes the form of large-scale lists. These lists are a part of her ongoing investigation into the act of bearing witness, and reflections on her personal experience of interdisciplinary research. Elder’s ‘incomplete lists’ explore Things That Protect, Things That Are Sensitive, Exponential Things, and Fleeting Things.  Created by carefully incising text into paper the lists are then pigmented using materials such as pulverized guns, glacial silt, and stardust. Elder’s most recent list, An Incomplete List of Everything in New Mexico, is featured as a limited-edition poster available at SITE Santa Fe’s gift shop.

Artist and researcher Nina Elder creates projects that reveal humanity’s dependence on, and interruption of, the natural world. Focusing on changing cultures and ecologies, Elder advocates for collaboration, fostering relationships between institutions, artists, scientists and diverse communities. She is the co-founder of the Wheelhouse Institute, a women’s climate leadership initiative. Nina lectures as a visiting artist/scholar at universities, develops publicly engaged programs, and consults with organizations that seek to grow through interdisciplinary programing. Nina’s art work is widely exhibited and collected and has been featured in Art in America, VICE Magazine, and on PBS. Her research has been supported by the Andy Warhol Foundation, the Rauschenberg Foundation award for Arts & Activism, the Pollock Krasner Foundation, and the Mellon Foundation. She is currently an Art + Environment Research Fellow at the Nevada Museum of Art, a Polar Lab Research Fellow at the Anchorage Museum, and a Researcher in Residence in the Art and Ecology Program at the University of New Mexico.

SITE Santa Fe’s Billboard Project began in 2017 with the opening of SITE’s new building. Bridging the gap between the museum and the public, the Billboard Project introduces art into public space and invites community engagement.

New Mexico-based artist and researcher Nina Elder creates work that examines geologic time, the influence of human activity on the environment, and changing cultures and ecologies.

Elder’s Incomplete Lists are a part of her ongoing investigation into the act of bearing witness, and reflections on her personal experience of interdisciplinary research. The process begins by trying to answer questions, as exhaustively as possible, in one sitting. For example: What is fleeting? What might offer protection? What is sensitive? Elder then rearranges the words until there is no hierarchy and no pattern. These lists function both as drawings and as poems.

An Incomplete List of Things That Are Sensitive is depicted against a photo of cracked Indiana limestone, referencing Elder’s ongoing research into quarries, mines, and human interruptions into geologic time.

An Incomplete List of Things That Protect shows the artist’s hand covered in a fine yellow powder, a mysterious substance that speaks of toxicity. After discovering that many science museums create fake uranium specimens for display, Elder began working with synthetic uranium as well as radioactive charcoal in her visual explorations of the atomic legacy.

An Incomplete List of Things That Are Fleeting depicts an island of the Southeastern coast of Alaska. This island, an important site for hunting, fishing and seaweed gathering for the Tlingit and Haida peoples, will soon be inaccessible due to rising oceans. 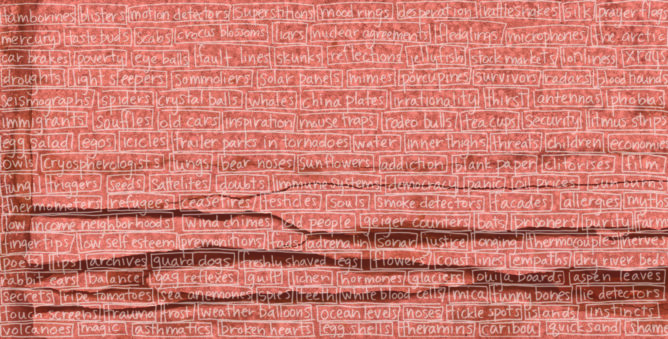 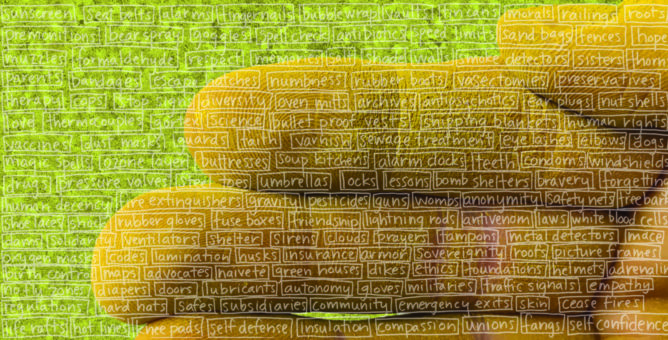 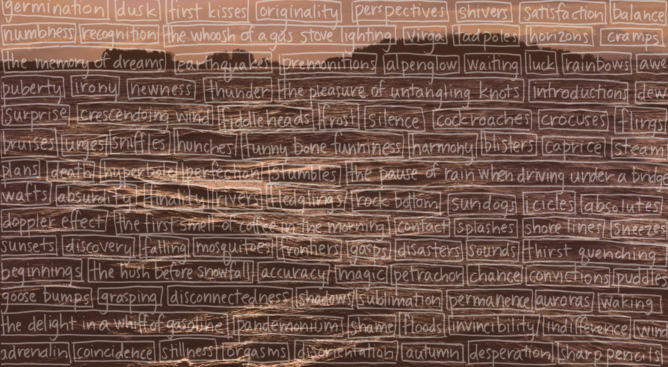 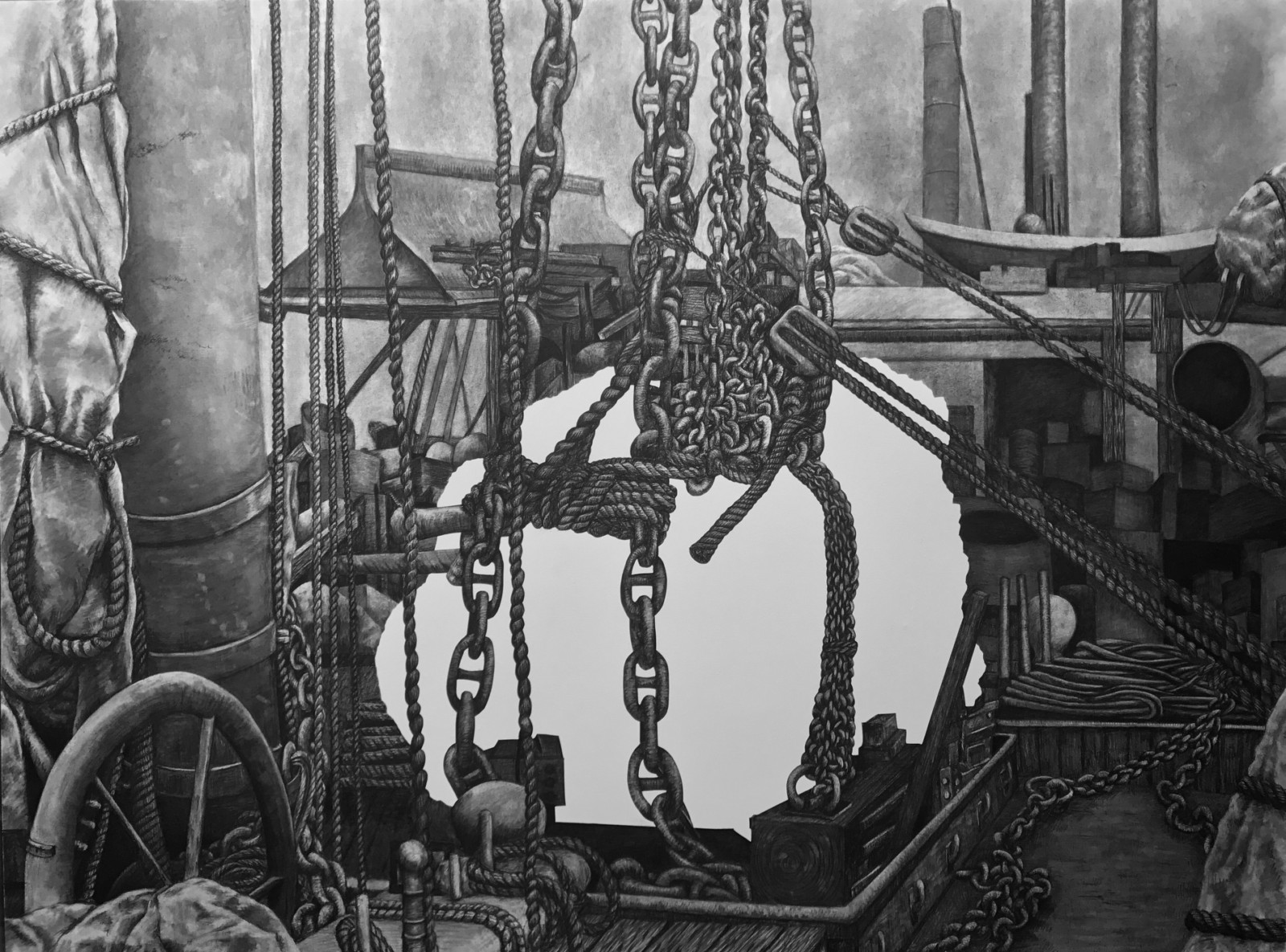 Nina Elder, "Ahnighito," (Cape York Meteorite) in transit to the American Museum of Natural History, 1897, 2017. Charcoal and pulverized meteorite on paper made in consultation with the Illoqqortoomuit Community and the International Repatriation Project. Courtesy of the artist. Photo by the artist. 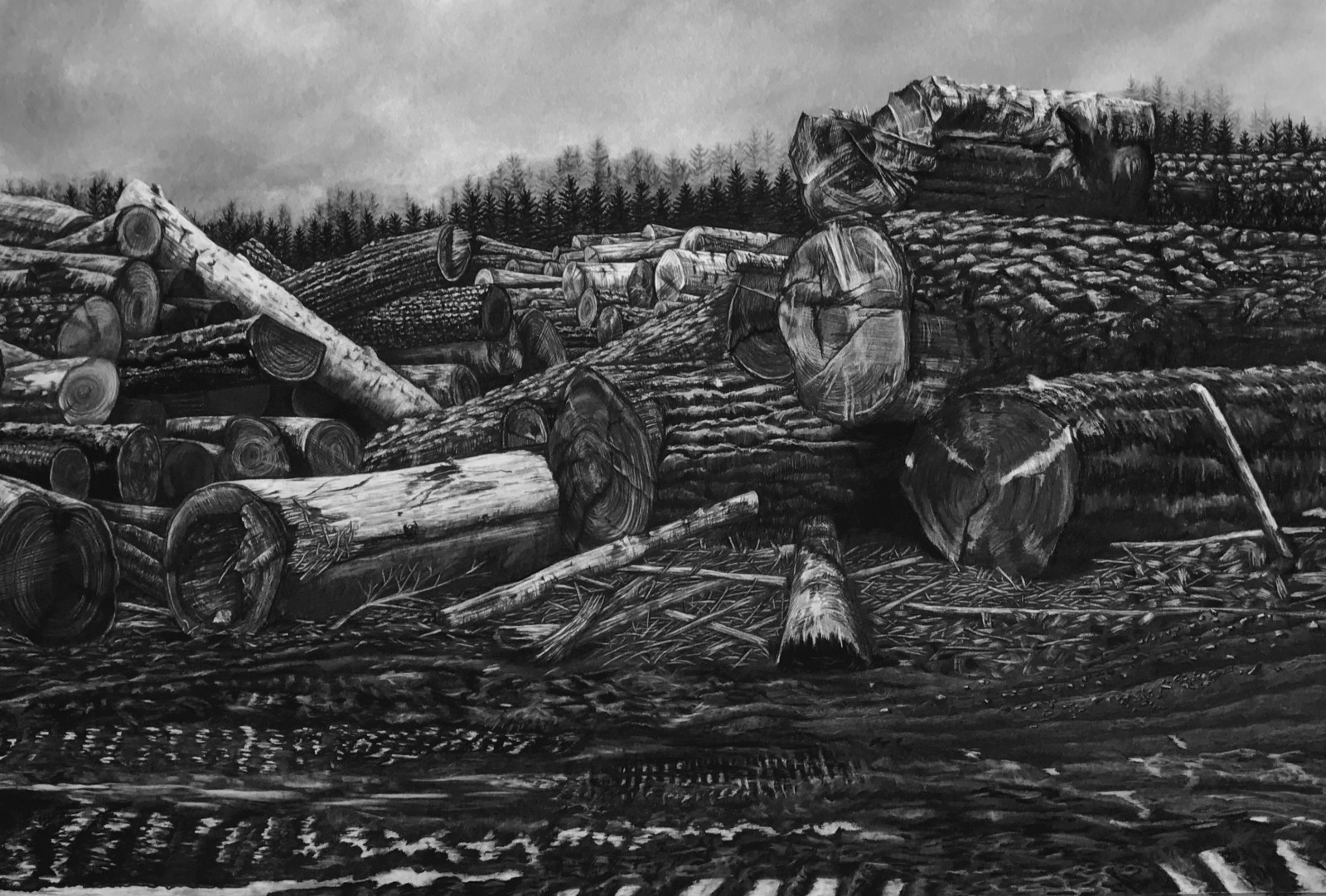 Nina Elder, "Rot Pile," 2017, Charcoal and incinerated industrial pulp waste on paper. Courtesy of the artist. Photo by the artist. 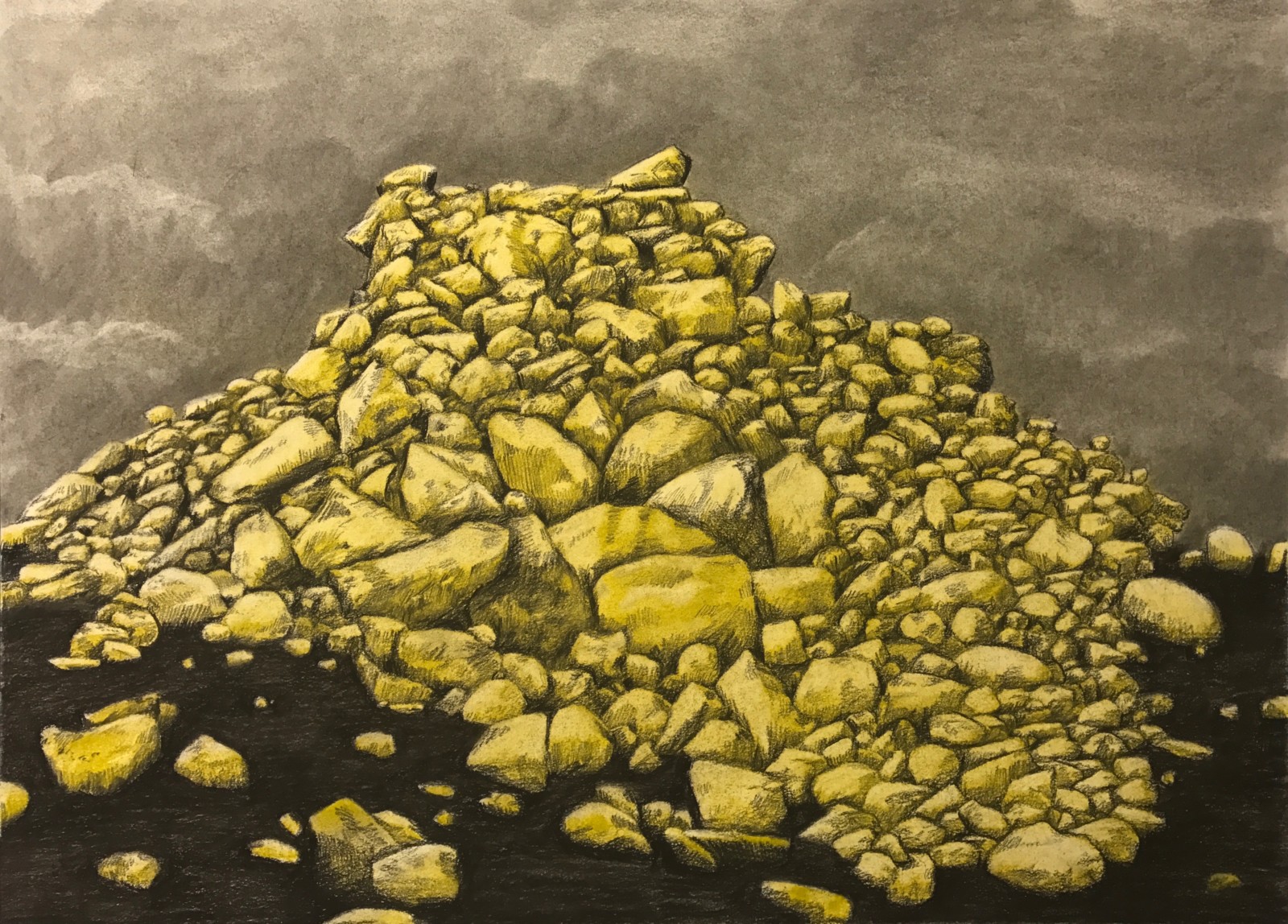 Nina Elder, "Unprocessed Uranium," 2017 Pigment and radioactive charcoal on paper. Courtesy of the artist. Photo by the artist. 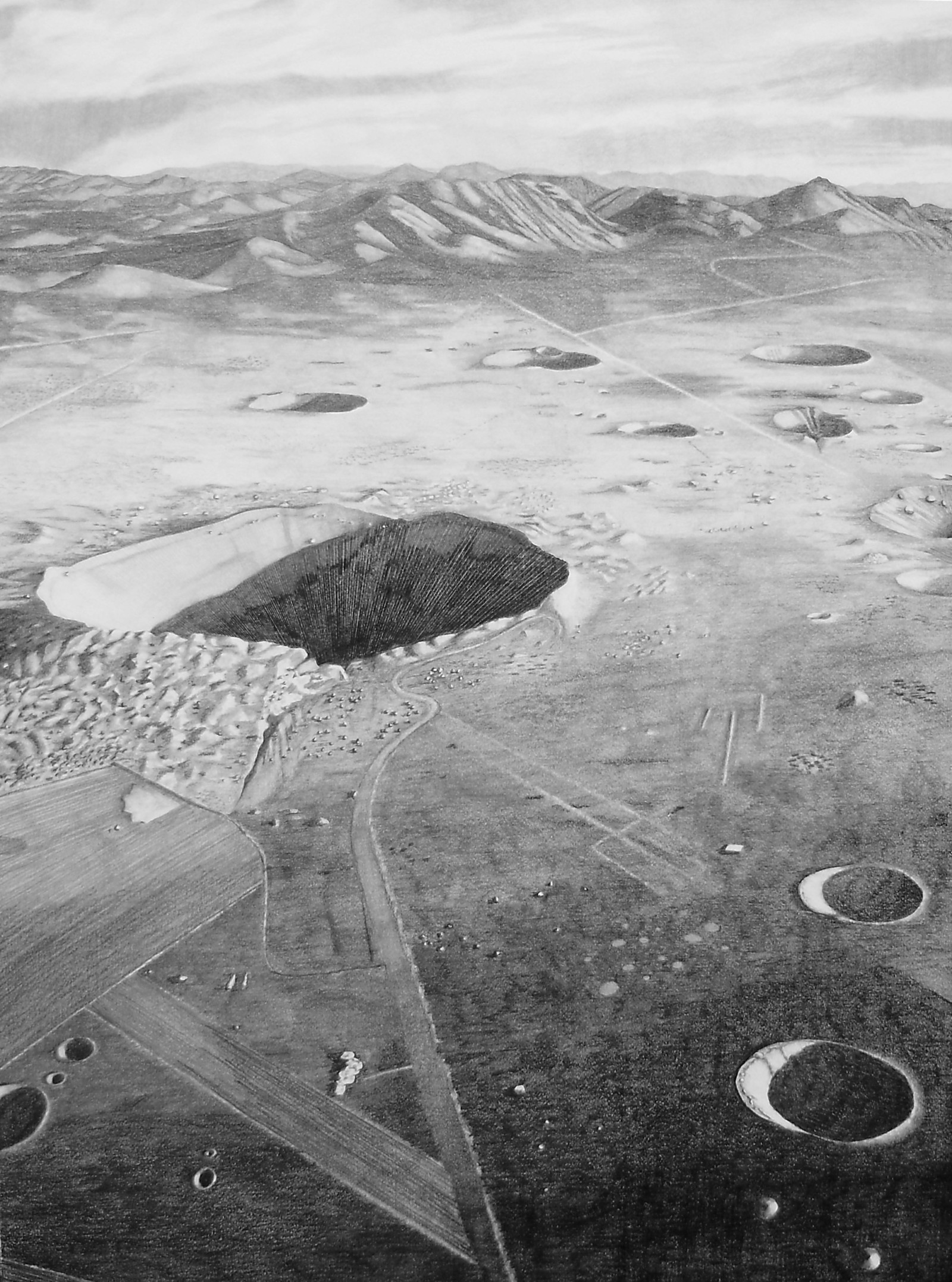 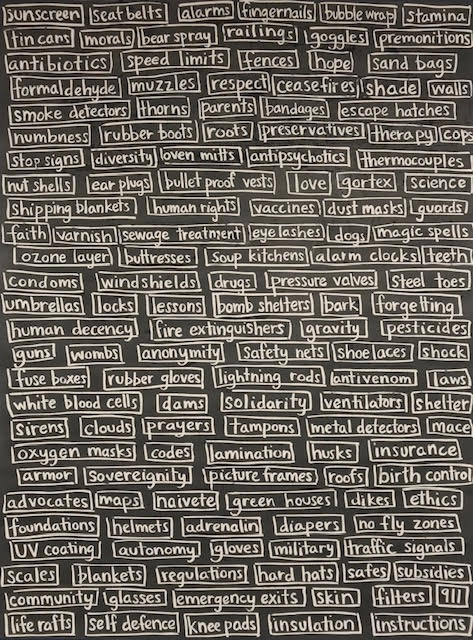 Nina Elder, "An Incomplete List of Things That Protect," 2018. Pulverized guns on incised paper. Courtesy of the artist. Photo by the artist.