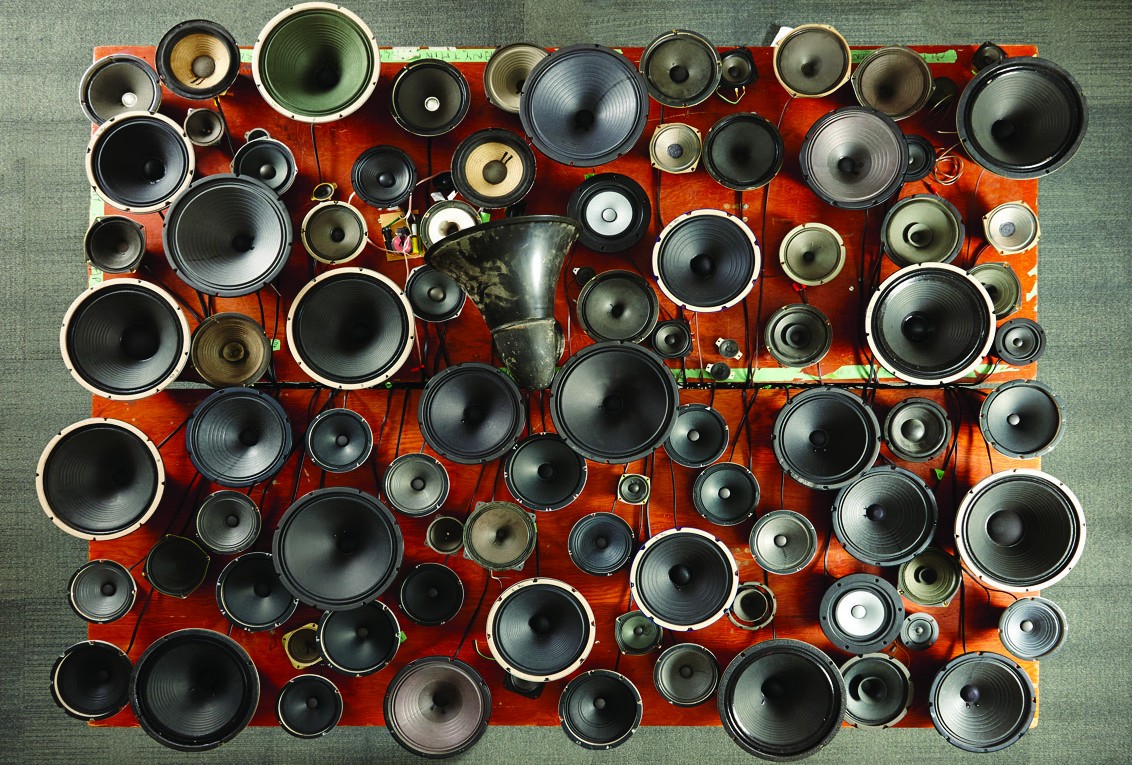 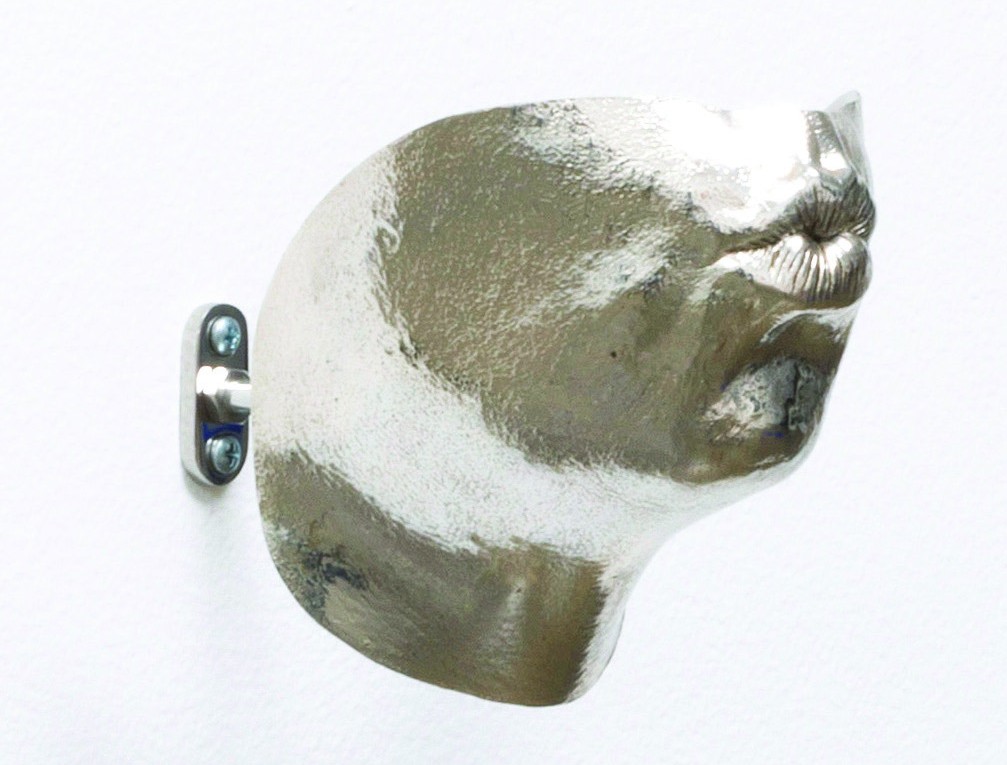 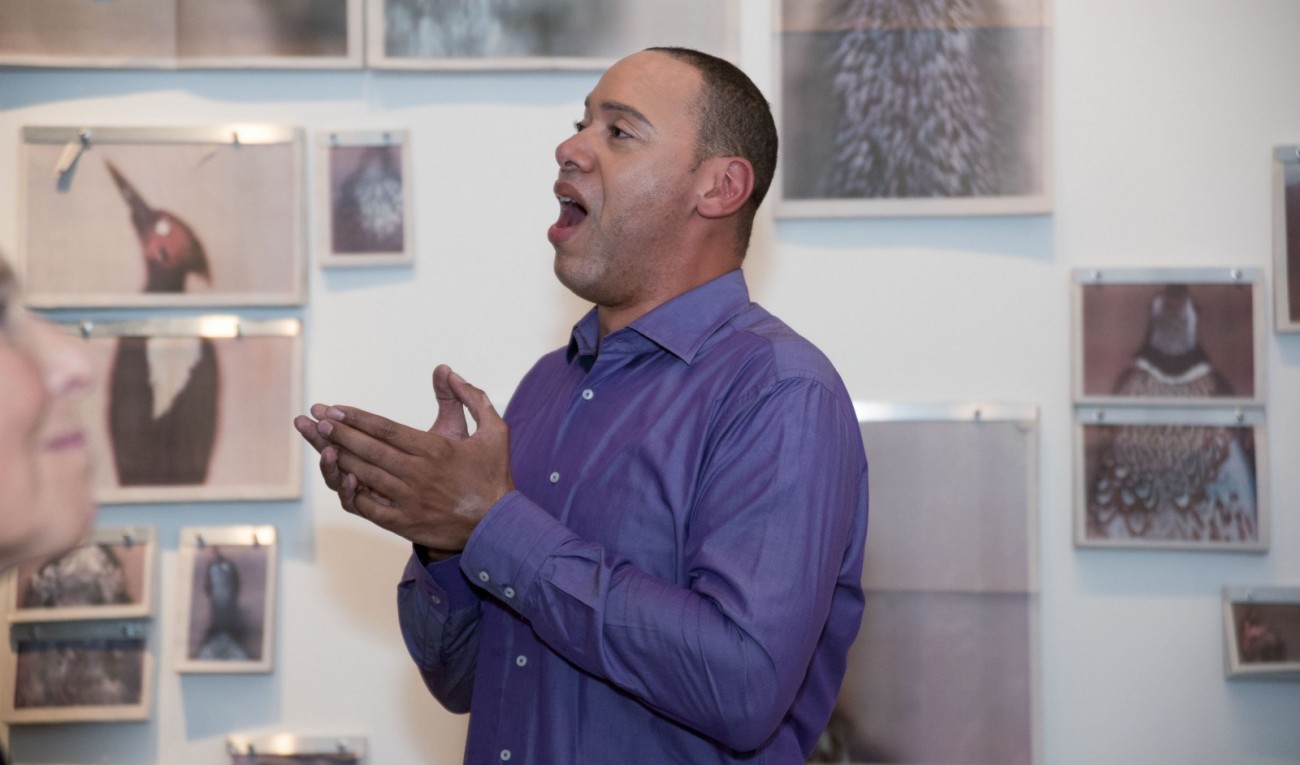 The third installment of SITE’s 20th Anniversary series will include installations by Janet Cardiff and George Bures Miller, Jim Hodges, Susan Silton. Projects by Ann Hamilton and Janine Antoni with Stephen Petronio have been extended to run through Jan. 3, 2016.

THEN: In 1997 SITE Santa Fe presented Jim Hodges’s solo exhibition No Betweens and More curated by Louis Grachos. This exhibition was anchored by the monumental work No Betweens, a large colorful curtain composed of the petals and leaves of hundreds of silk flowers.

NOW: Hodges presents a new installation that harnesses the evocative qualities of nature and expresses the artist’s sensitivity to materials. Two works are in elegant dialogue in this installation. Untitled (Stump 1) features Hodges’s signature spider web motif here composed of metal chains suspended on an old tree stump. The spider web, a powerful subject in his work, touches on themes that define all our lives–strength, impermanence, fragility and resilience. Creating a double of this work and a mediated reflection of the viewer is Untitled (Palouse black and white), a large mirrored wall etched in a pattern that suggests the topology of the rolling hills and farmland of the northwestern United States.

THEN: In 2003 Janet Cardiff and George Bures Miller’s immersive installation The Paradise Institute was included in the exhibition Uneasy Space: Interactions with Twelve Artists, organized by Nora Kabat Dolan. The Paradise Institute, a complex work that explores the psychological effects of cinema, was the centerpiece of the Canadian Pavilion for the 2001 Venice Biennale.
NOW: Cardiff and Miller present the interactive sound sculpture Experiment in F# Minor (2013). On a large table sits a collection of bare speakers of all shapes and sizes. Light sensors in the table register the movements of viewers around the room–their shadows cause a range of sound and instrumental tracks to fade up and overlap, mingle and fade down. Many viewers in the room create a cacophony of musical compositions that vary according to where the audience walks or how many people are present. When the space is empty, the table fades to silence.

THEN: 2003 SITE Santa Fe presented a solo exhibition of Susan Silton’s work featuring a selection from her Aviate series and the video projection hemidemisemiquaver.

NOW: Silton will present components from The Whistling Project (2010-), a multi-leveled project including performance, texts and sculpture that investigate the gendered voice and its aesthetic and discursive possibilities. Silton and her all-female whistling group, The Crowing Hens, will perform at SITE Santa Fe on Saturday, November 7 at 6 pm. A video projection of the performance will be installed in the gallery as part of her exhibition.

THEN: In 1995, Ann Hamilton presented the video installation SALIC (1995) sited within a train car adjacent to SITE’s building. This work was a part of SITE Santa Fe’s First International Biennial: Longing and Belonging: From the Faraway Nearby, curated by Bruce Ferguson.

NOW: Hamilton presents the common SENSE · the  animals  (2014-2015), an installation which explores “touch” as the sense that is common to all animals species. Created from the artist’s extensive engagement with the University of Washington’s Burke Museum of Natural History and Culture’s Ornithology collection, for Hamilton, the work is “an address to the infinitude and threatened extinctions we share across species – a lacrimosa, and elegy for a future being lost.” It was commissioned by The Henry Art Gallery, University of Washington and premiered in early 2015. SITE’s exhibition will only be the second time it is presented. This show debuted in summer but will been shown through the fall!

In the summer, Hamilton invited vocalists from the Santa Fe Opera Apprentice Singers Program to serenade the congregation of animal images. They were accompanied by Santa Fe Opera pianists. The dialog between animal images and musician can be interpreted as an elegy, a lament, a prayer, a meditation, a promise, or an oath. For Fall 20/20, a recording of a compilation of all the Opera Performances will be played in the installation.

THEN: In 1999 Janine Antoni’s performative sculpture and was featured in SITE Santa Fe’s Third International Biennial Looking for a Place, curated by Rosa Martinez. Antoni’s 2002 solo exhibition taught tether teeter was organized by SITE Santa Fe and presented a carefully selected overview of her work from 1993-2002.

NOW: SITE presents Honey Baby, a collaboration between Antoni and the choreographer Stephen Petronio. This work is the second collaboration between Antoni and Pertronio, the first being Like Lazarus Did (2013), a dance and live art-installation. Honey Baby is a fourteen-minute video inspired by motion in utero, exploring the unique relationship between subject and host. 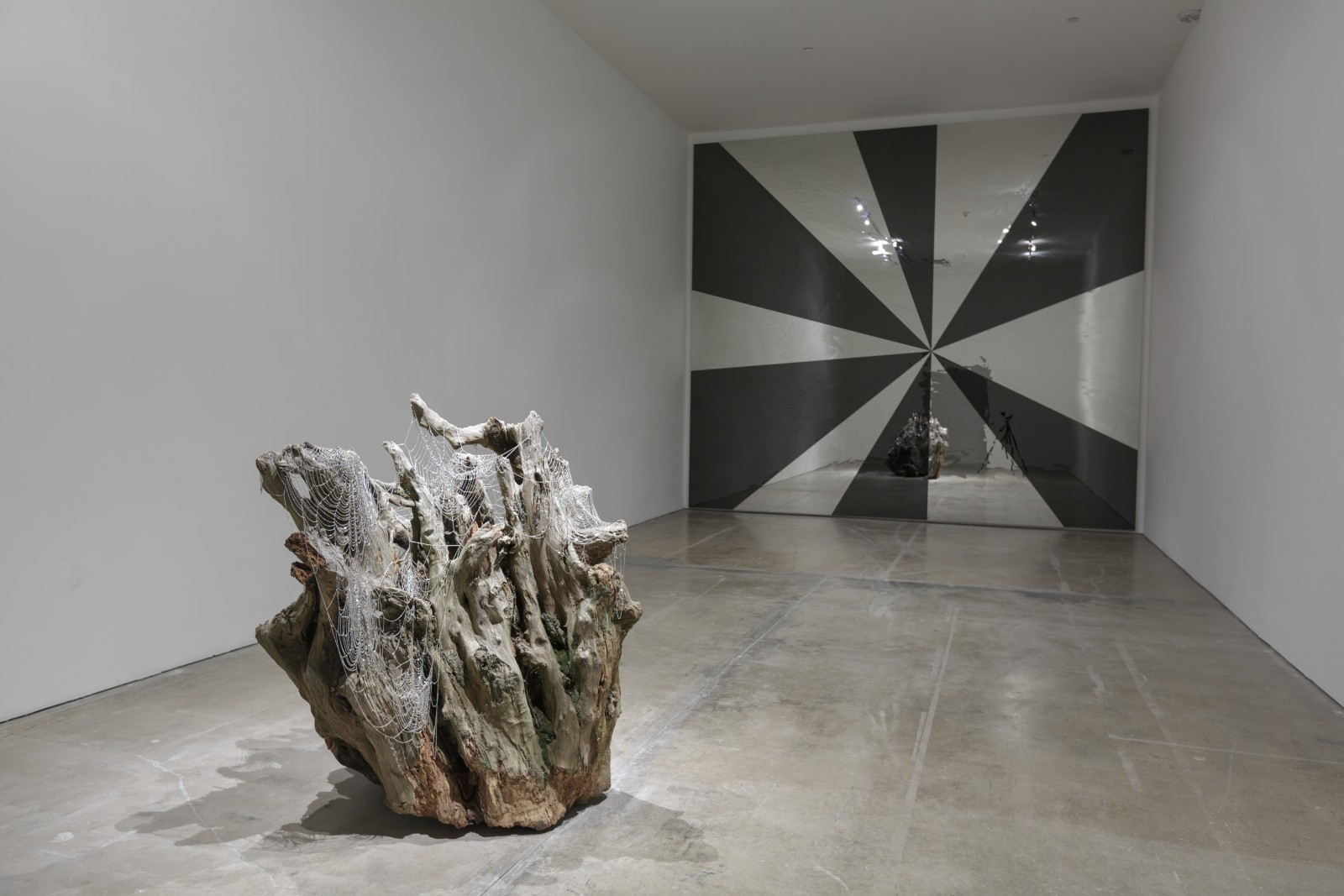 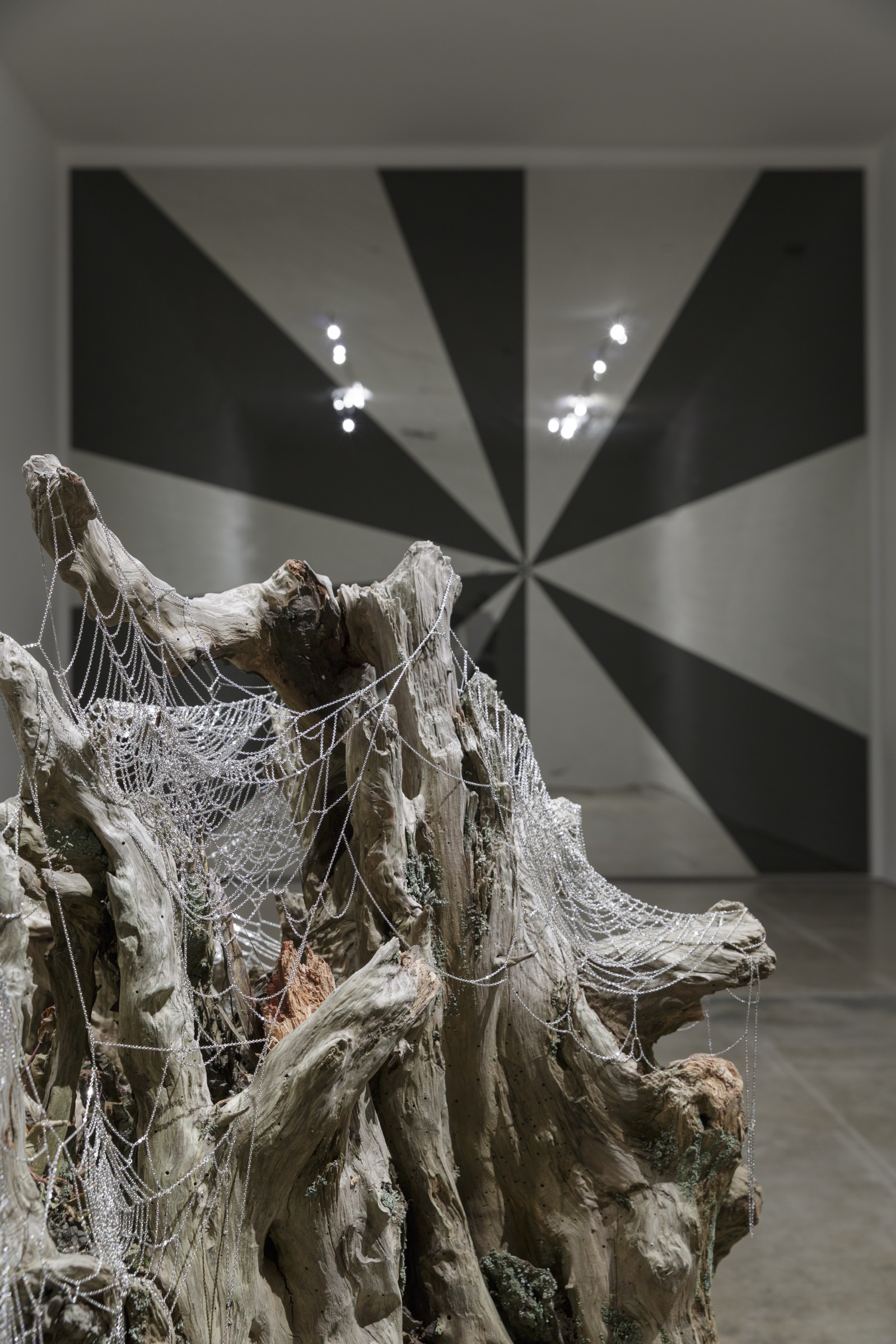