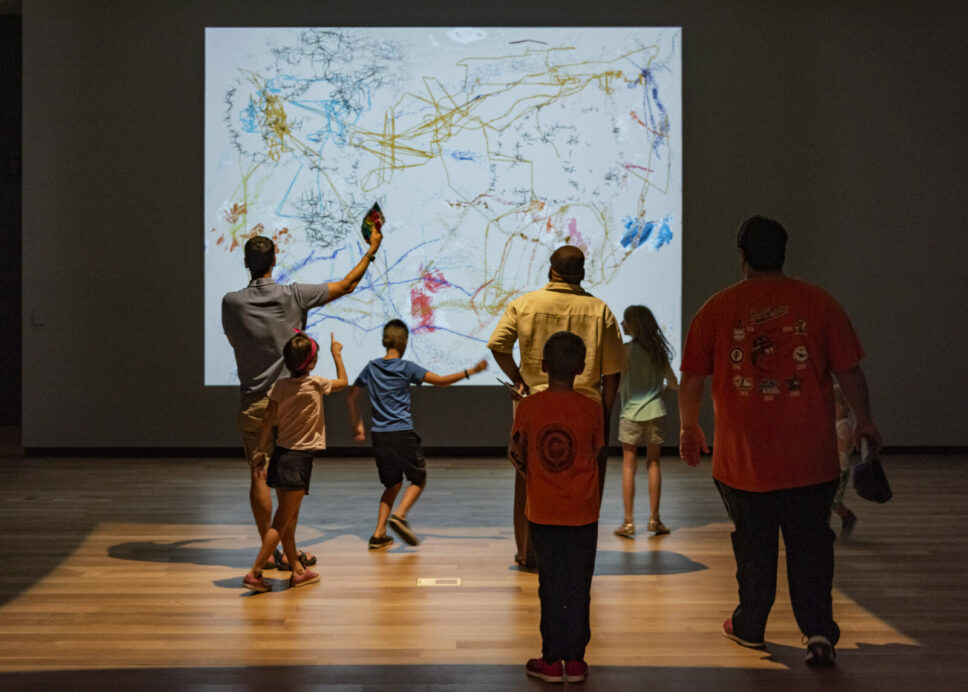 The role of the audience is unique to the ever-changing composition of each art piece, creating an interdependent relationship between artist, artwork and viewer. This exhibition informs and engages audiences through sound, movement and bearing witness. Some artworks prompt physical gestures from the body, while others challenge the mind—illuminating how the animate controls the inanimate and vice versa. These works playfully explore curious and amusing perceptions of human reality, particularly how we interact with technology. 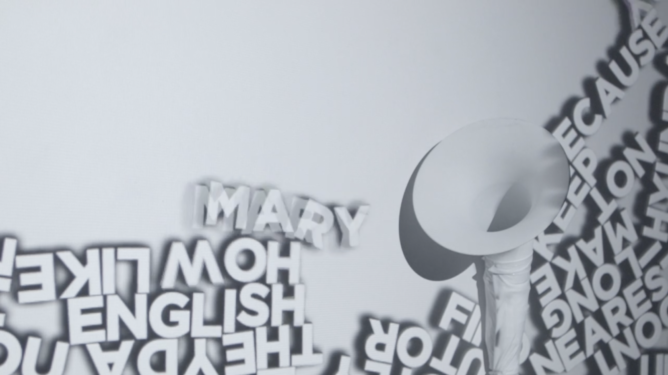 Neil Mendoza’s The Robotic Voice Activated Word Kicking Machine, 2016, is an exploration of language and our strange relationship with talking to machines. We talk to these devices, from customer-service bots to “intelligent assistants,” as if they were our friends, ignoring the trail of data that we leave behind. The piece combines projection and robotics to blur the line between the physical and the digital. Viewers speak into the hanging horn. Their words are then converted into text and launched into the virtual world. They accumulate there, sometimes kicked by a robotic foot and sometimes funneled back out into the world as sound through the horn on the floor. 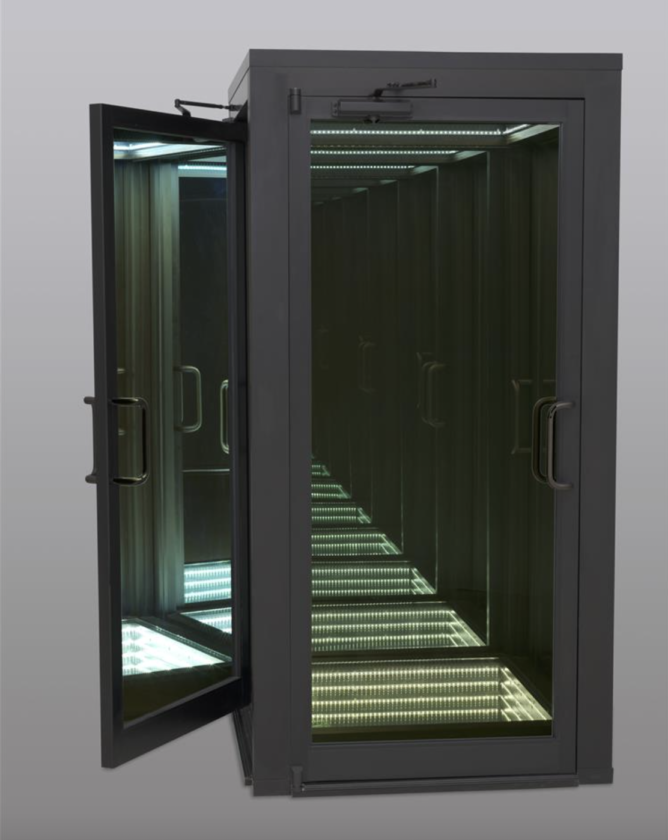 Iván Navarro’s Reality Show, 2010, lets viewers feel the mind-bending illusion and sensation of stepping into infinity, although they have only stepped into a simple telephone booth with glass and mirrors. Surrounded by an infinite tunnel of light, viewers are disorientated, unable to grasp a sense of reality. Interestingly, those outside the booth can see the expression of the person inside, but, due to the enclosure’s one way glass, the participant is unable to see outside the walls. 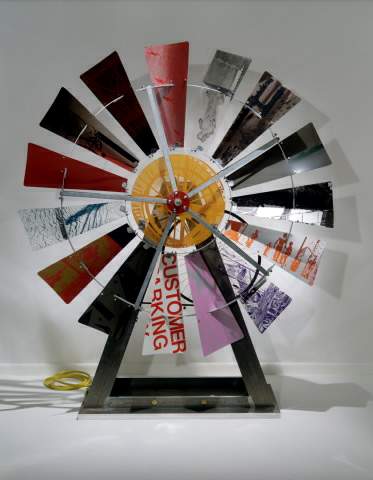 Robert Rauschenberg’s Eco-Echo,1992-93, is a part of a series of windmill-like structures that Rauschenberg began fabricating at Saff Tech Arts in Oxford, Maryland, upon his return from the Earth Summit in Rio de Janeiro in 1992. Of particular concern to Rauschenberg were that these works should not waste energy and that the viewer should play an integral role. Thus, these sonar-activated sculptures respond to the presence of a viewer moving nearby and stop when no one is directly in front of them. Donald Saff oversaw the mechanics and construction of the aluminum and Lexan fan blades, onto which Rauschenberg applied silkscreened imagery and paint. Rauschenberg created the Eco-Echo series to illustrate how viewers are complicit in electrical-energy production, its global industries, and our environment. 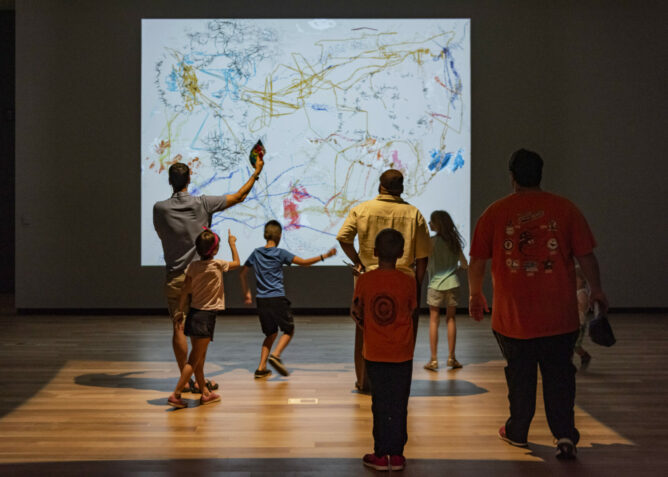 Camille Utterback’s Untitled 5, 2004, invites visitors’ movements in the gallery space; the movements are run through computer software written by the artist, which translates them into an animated digital painting that constantly evolves. Although thoroughly contemporary, Untitled 5 builds on a rich lineage of artwork that records or transforms human movement, including the abstract expressionists Utterback considers her creative forebears.

Over the span of his six-decade career, he was considered by many to be one of the most influential American artists due to his radical blending of materials and methods. Working in a wide range of subjects, styles, materials, and techniques he did not restrain himself to one movement and his oeuvre ranged from paintings to photography, mixed media and even avant-garde performance pieces.

His unique approaches to painting, sculpture, print, photography, and performance shaped the artworld. Rauschenberg lived and worked in New York City and on Captiva Island, Florida, until his death on May 12, 2008.

Camille Utterback (b.1970)
Currently based in California, Indiana-born artist Camille Utterback stands at the fore of interactive art. Utterback programs custom algorithms for the purpose of “embodiment,” where viewers can sense their bodily presence in a virtual environment. Utterback uses her digital tools to generate a style of art known as Digital Abstraction, which updates a previous generation’s innovations in traditional media with data computation and the processing power of microchips. Utterback said, “The rules of Untitled 5 are carefully constructed to create an overall composition that is organic, open, and evocative, while still being completely algorithmic.”

Neil Mendoza (b. 1977)
Neil Mendoza, born in the UK, based in Albuquerque, New Mexico. Mendoza combines sculpture, electronics and software to bring inanimate objects and spaces to life. By combining found objects with technology in unexpected ways, the different elements of his work can be looked at from a new perspective. He explores themes of the absurd, the humorous, the futile and the surreal. He has exhibited work and talked at conferences around the world, taught classes on art and technology at UCLA and Stanford, and co-founded the art collective, is this good?

Iván Navarro (b.1972)
Currently based in New York, Chilean artist Iván Navarro uses light as his raw material, turning objects into electric sculptures and transforming the exhibition space by means of visual interplay. His work is certainly playful but is also haunted by questions of power, control and imprisonment. The act of usurping the minimalist aesthetic is an ever-present undercurrent, becoming the pretext for understated political and social criticism.

INTERPLAY is Curated by Brandee Caoba.