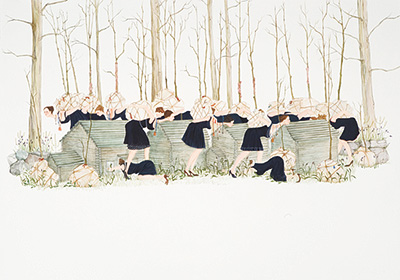 Amy Cutler’s meticulously rendered paintings on paper conjure unusual worlds predominantly inhabited by women. The women who populate Cutler’s paintings are often similarly dressed and engaged in enigmatic activities such as mending tigers or awkwardly carrying mysterious loads through semi-bucolic landscapes. Though they seem to invoke fantasy worlds, Cutler’s compositions are grounded in the exploration of interior states and are inspired by the complex web of emotions generated by real-life situations.

Cutler’s compositions are often concentrated against a stark white background, which imbues them with a sense of timelessness and indeterminacy of place. This ambiguity is heightened by Cutler’s embrace of a variety of visual references including Indian miniature paintings, US Army manuals and the costumes and textiles of diverse cultures and time periods, which she renders with great detail and specificity. For Cutler, the non-communicative expressions worn by her characters are indicative of their inward looking nature. Her women are engaged in self-examination and self-reflection of which the entire composition becomes a metaphor.

For a recent exhibition at the Museo Nacional Centro de Arte Reina Sofía, Madrid, Cutler ventured into sculptural installation bringing her idiosyncratic world into three dimensions with a work entitled Alteraciones. Dozens of female figurines produced from molds hand-made by the artist are anchored around a table top and engaged in weaving a thread that also binds them to each other. Though this work represents a new media for the artist, the themes of collective female activity and the exploration of emotional and psychological states explored in her paintings is evident.

For her exhibition at SITE, Cutler will premiere new works integrated with a selection of older paintings from public and private collections. Amy Cutler participated in the 2004 Whitney Biennial and has had solo exhibitions at the Museo Nacional Centro de Arte Reina Sofía, Madrid and the Indianapolis Museum of Art. Her works are in the collections of the Museum of Modern Art, New York the Whitney Museum of American Art and the Walker Art Center, Minneapolis. She lives and works in Brooklyn, New York.