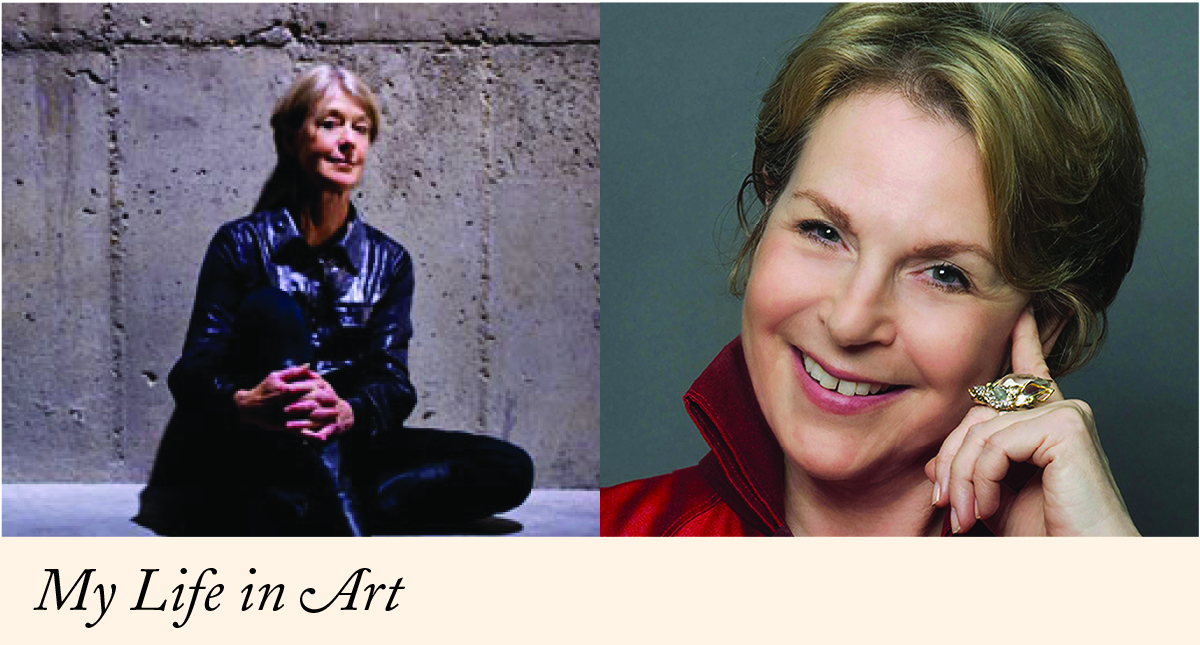 My Life in Art: Suzanne Lacy with Elizabeth Sackler

Suzanne Lacy is a visual artist whose prolific career includes performances, video and photographic installation, critical writing and public practices in communities. She is best known as one of the Los Angeles performance artists who began active in the Seventies and shaped and emergent art of social engagement. Her work ranges from intimate, graphic body explorations to large-scale public performances involving literally hundreds of performers and thousands of audience members. Her work has been reviewed in The Village Voice, Artforum, L.A. Times, the New York Times, Art in America, and in numerous books and periodicals. She lectures widely, has published over 70 texts of critical commentary, and has exhibited in The Museum of Contemporary Art in Los Angeles, The New Museum and P.S. 1 in New York, and The Bilbao Museum in Spain. Her scores of fellowships include the Guggenheim Foundation, The Henry Moore Foundation, and The National Endowment for the Arts.  Lacy is founding chair of the MFA in Public Practice at the Otis College of Art and Design.

Elizabeth A. Sackler is a Public Historian and the Board Chair of the Brooklyn Museum – the first woman to hold the position in the museum’s nearly 200 year history.  Elizabeth Sackler has spent her adult life creating opportunities for those who have not had a public voice or venue; as an American Indian advocate, this drive led her to establish the American Indian Ritual Object Repatriation Foundation in 1992, and as an arts activist, it informed her vision for the Elizabeth A. Sackler Center for Feminist Art at the Brooklyn Museum, which opened in 2007. The Sackler Center is a nexus for feminist art, theory and activism. It is the permanent home of The Dinner Party by Judy Chicago, its Feminist Artand Herstorygalleries display critically acclaimed exhibitions, and its Forum is a venue for lectures and a platform of advocacy for women’s issues. The Sackler Center has hosted hundreds of hours of public programs available for viewing at www.brooklynmuseum.org/eascfa/video.  Dr. Sackler lectures often; most recently, at the 2014 New York City YWCA Potential to Power Symposium and at the 2013 ArtMiami Collecting Women Artists Symposium with the Keynote Address, “Changing the Course: Women, Art & the Art Market.”  She is an honorary member of the Guerrilla Girls and has received the Jewish Women’s Archive’s “Making Trouble, Making History Award” andArtTable’s “Distinguished Service for the Visual Arts Award.” Elizabeth Sackler is President of The Arthur M. Sackler Foundation, President and founder of the American Indian Ritual Object Repatriation Foundation, and President of the Elizabeth A. Sackler Foundation.

Tickets: $10 for adults, $5 for students, seniors, and SITE members at friend and family levels; free with advance reservation for members at the supporter level and above.
For reservations call 505 989 1199