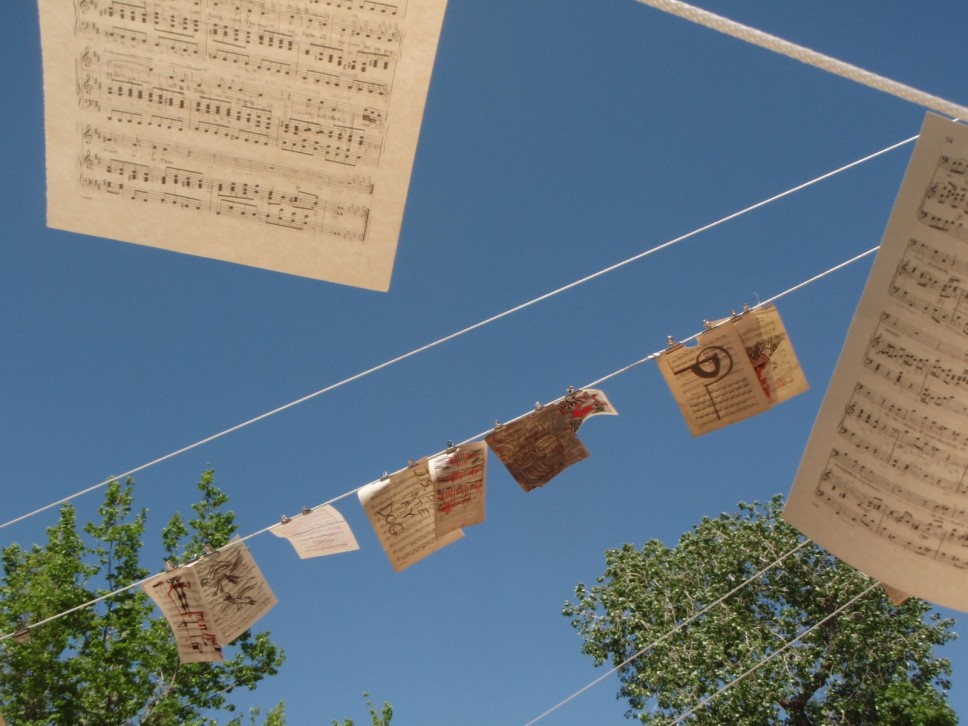 Suzanne Bocanegra: I Write the Songs

I Write the Songs is an event that engages visitors to the Santa Fe Plaza in the creation of a spontaneous musical performance. Anyone who passes through the plaza that day will be invited to make drawings on sheet music. These drawings will then been interpreted by the FLUX Quartet who will play continuously through the event. Documentation and drawings from this performance will be included in the exhibitionSuzanne Bocanegra: I Write the Songs, on view at SITE Santa Fe June 18- September 18, 2011. The first iteration of this performance was commissioned in 2009 by The Drawing Center in collaboration with the River to River Festival, New York.

Suzanne Bocanegra’s work has been featured in exhibitions at the Victoria and Albert Museum, the Serpentine Gallery and the Hayward Gallery, in London as well as the Fabric Workshop and Museum, Philadelphia and UCLA’s Hammer Museum among others. Her performances have been presented as several international venues, including the Museum of Modern Art New York, the River to River festival New York, and the Athelas Festival in Copenhagen. Bocanegra lives and works in New York.

The FLUX Quartet (Tom Chiu, Felix Fan, Conrad Harris, Max Mandel) was founded by violinist Tom Chiu in the 90’s. Named partly as an homage to the 60’s Fluxus art movement, the quartet was founded with a quest similar to that of some of the original Fluxus artists: a search for a living art for all people with an embracing “anything-goes” spirit. To that end, FLUX has always been committed to projects of unique vision that defy aesthetic categorization.

Suzanne Bocanegra: I Write the Songs is organized by Ian Berry, Malloy Curator of The Frances Young Tang Teaching Museum and Art Gallery at Skidmore College in collaboration with the artist. Support for the
exhibition was provided by the New York State Council on the Arts, the Overbrook Foundation, and the Friends of the Tang.