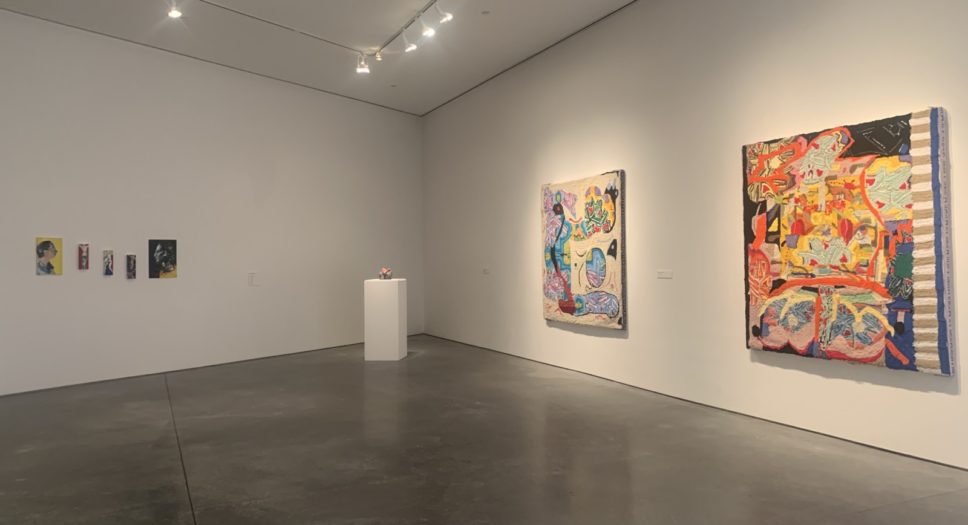 Join exhibiting 2020 SITE Scholars for a virtual tour of the SITElab exhibition, There is a crack in everything, that’s how the light gets in, and moderated conversation with co-curators Joanne Lefrak and Brandee Caoba.

Bryanna Aguilar, CNM
Bryanna Aguilar is an emerging artist working in fine arts, small metals, and illustration. She was born and raised in Vallejo, California before moving to Corrales, New Mexico. She works in both traditional and digital mediums and has begun to experiment with extending the 3D form beyond the canvas. In the fall of 2019, Aguilar had four pieces on-view in the group exhibition MINDSCAPES at the Factory on 5th Gallery in Albuquerque, New Mexico.

Ranran Fan, UNM
Ranran Fan (b.1988, China) is an artist currently based in the US, working primarily in photography, installation, and performance. Fan earned a BFA from the School of the Art Institute of Chicago (2013), a Bachelor of Science in Biology in Hong Kong (2011), and she is pursuing an MFA at the University of New Mexico in Studio Art (anticipated 2021). Her work has been exhibited internationally: Chicago, Boston, Fort Collins, Albuquerque, Beijing, Xiamen, Shenzhen, Datong (China) and Incheon (Korea). Fan is the Shiseido Photographer Prize Winner of the Three Shadows Photography Award in China (2018). She curated a photo exhibition for China Non-governmental Aid Education Foundation (2016).

Juana Estrada Hernandez, UNM
Juana Estrada Hernandez is originally from Luis Moya, Zacatecaz, Mexico. At the age of seven, her family migrated to the United States, and she was raised in Denver, Colorado. Estrada received her Bachelor of Fine Arts in Printmaking from Fort Hays State University. She currently resides in Albuquerque, New Mexico and is pursuing her Master of Fine Arts in Printmaking. Estrada’s work is influenced by her experience being raised as a young undocumented student in the United States. Estrada uses her family’s and individual’s migration stories to remind her audience that immigrants are still human beings, and to oppose any negative rhetoric being heard today surrounding migrants and immigration policies.

Hannah Leighton, UNM
Leighton’s current work is created using yarn, cotton fabric and a contraption called a tufting gun. This tool shoots yarn at a high speed, creating loops that result in ‘tufts.’ Leighton’s work is illustrative of a shift in the art world’s acceptance of a medium that began as a stereotypically domestic domain. Fiber is a relatively recent area of exploration for Leighton, whose past work focused upon acrylic paint, a medium that mirrors obsessions of our culture—scale, speed and plasticity. Leighton graduated from the Maryland Institute College of Art summa cum laude in May 2015. Post-graduation she was accepted to the Green Olive Arts Residency Program and spent a month painting among the medinas of Morocco. Most recently, Leighton’s work was accepted into the publication New American Paintings MFA Issue 141 and the West Issue Issue 144. Leighton is thrilled to be back in school at the University of New Mexico, where she plans to attain her MFA in 2021.

Amy Pilling, SFCC
Having grown up in a family of artists and scientists, Amy Pilling draws from both worlds in her work. Although she worked as a ceramicist in her 20s and 30s, she began exploring bio-art and SciArt in 2015. Pilling collaborated with an artist friend on The Myco-planning Network, a citizen science-art installation teaming people up with collective organisms such as slime molds to address hunger and equitable food distribution. The Myco-planning Network won a juried award in The Land Mark Show at Muñoz Waxman Gallery at CCA. She was then accepted into the 2017 Santa Fe Art Institute residency where she realized that she needed a laboratory of her own. She received a Fulcrum Fund grant through 516 ARTS as seed funding for Life Arts Laboratory, a mobile life science laboratory for artists, citizen scientists and educators. Since then, she has been developing Life Arts Laboratory, and working to integrate art with science in STEAM education with Dr. Andrea Polli of Biocultura and UNM. Pilling also focuses on researching and making work that explores the natural world including collective intelligence, temporal phenomena, and hidden forces such as magnetic fields or surface tension.

Amy Traylor, UNM
Amy Traylor was born in Alabama and raised in Louisiana, where she received undergraduate degrees in anthropology and photography from Louisiana State University. She has lived in New Mexico for 19 years. Traylor completed her Master’s degree in Art Education in 2009 and is currently pursuing her MFA in Experimental Art and Technology at the University of New Mexico. Traylor’s primary medium is software, which she writes to investigate the intersections of art, culture, science, and computation. In her free time Traylor researches the history of computational art and the algorithm as philosophy, in addition to curating art exhibits. Last summer she co-curated the exhibit Digital Disobedience with Amy Hulshoff. Traylor has shown work at the Southwest Biennial,  Albuquerque Museum, Currents New Media Festival, and the MIT Media Lab. When she has completed this degree, she looks forward to starting an interdisciplinary PhD in computational art history, computer science, and anthropology.

The SITE Scholar Program is an initiative to honor college and graduate level creative students in the community. Founded with the goal to increase student participation in the museum and contemporary art world, this program enables students to enrich their educational experience. Composed of top students from the University of New Mexico, the Institute of American Indian Arts, the Santa Fe Community College, Central New Mexico Community College, St John’s College, and Highlands University, these nominated students are recognized by SITE Santa Fe as high achieving leaders within their schools.

The SITE Scholars Program is generously supported by The Hayes Foundation.