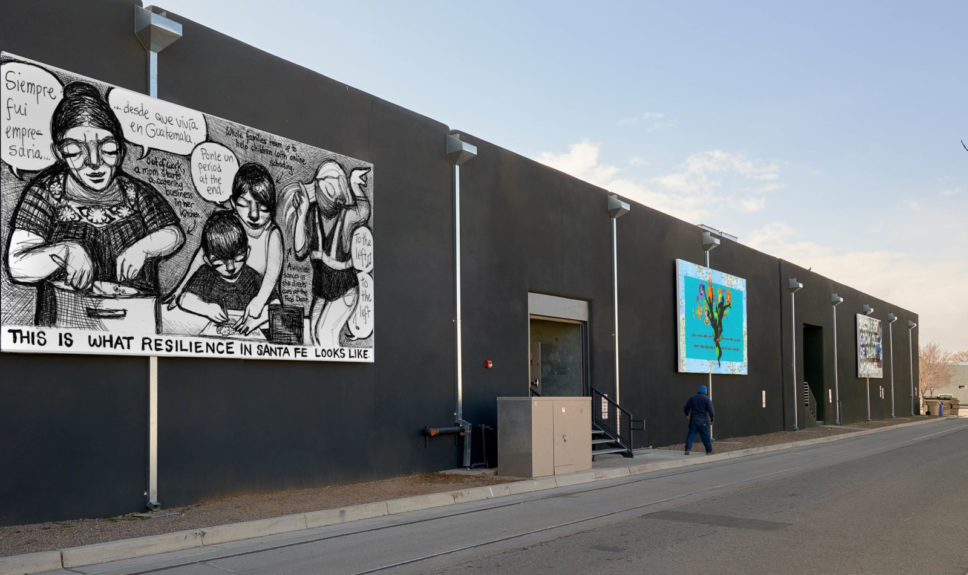 Overview:
SITE Santa Fe believes that contemporary art has the power to transform lives, foster empathy, unite communities and inspire social change. During this time of crisis, uncertainty, and change, SITE is shifting the way we connect with our community and imagining new ways we can help one another through the arts. We have been given the opportunity to see how interconnected we all are on a grand scale, and how we are truly remarkable in our ability to adapt and work together. For many of us, these have been times of introspection, reflection, action, and transformation, the perfect breeding ground for new ideas and creative projects, and what we might call silver linings. 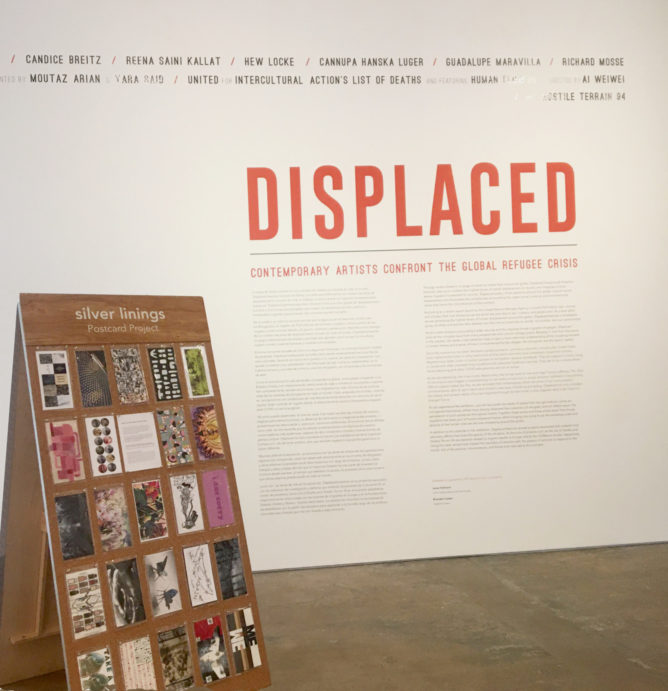 The project consists of three parts:

We invited New Mexico artists of all ages and backgrounds to create an original 2D artwork on a postcard (5.5 x 11 in) and donate it to SITE Santa Fe to be sold at curated and online with 100% of the sales to support The Santa Fe Dreamers Project.

All submitted works in a horizontal billboard format are being reviewed by a jury comprised of community members (see below for more information on jurors).

Three finalists will be selected to have their works reproduced and presented as a billboard on the side of SITE’s building, premiering in early 2021.
View Submission Catalogue

Each participating artist received a postcard on which to create an original artwork. Submitted works are included in an online catalogue with links artist websites, and each submission is available for sale with 100% of the proceeds donated as part of a fundraiser for the Santa Fe Dreamers Project.

silver linings: Postcard Project is juried by Santa Fe community members. This panel of jurors will review all submissions in September, and three finalists will be announced in September. The finalists will have their works reproduced and installed as billboards on SITE’s building premiering in early 2021. Learn more about SITE’s Billboard Project here.

Special thanks for the support of our in-kind sponsor, Paper Tiger.

Out of the many incredible works of art submitted to SITE as part of silver linings, we are thrilled to announce SITE’s esteemed jury has selected three postcards to reproduce on SITE’s exterior billboards.

Thank you to every amazing artist who submitted work to this project and a huge congratulations to our three finalists, Eleanor Stevens, Christine Sullivan, and Bette Yozell!
Learn more about our finalists

Eleanor Stevens
This is What Resilience in Santa Fe Looks Like
https://eleanordstevens3.wixsite.com/illustration
Pen, paper 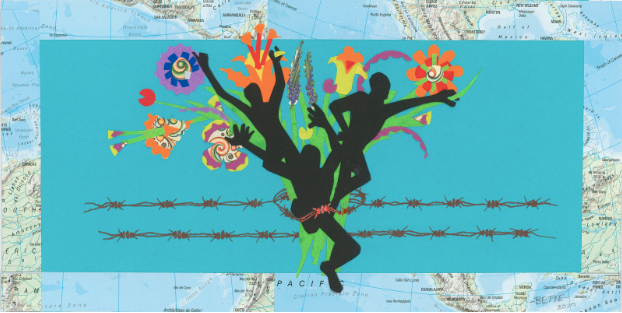 This jury consists of an insightful and talented group of artists and scholars who have been involved with SITE through SITE Scholars, Young Curators, GEN-ERATE, SITE Internships, SITElab exhibition, and the Santa Fe Dreamers Project. 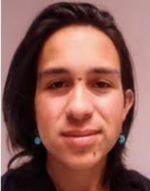 Artemisio Romero y Carver is a 17-years old Chicano writer, political organizer and  visual artist. Born and raised in New Mexico, he is currently a highschool student at the New Mexico School for the Arts. In 2020 he was named the Santa Fe Youth Poet Laureate. Romero y Carver is a founding member of YUCCA (Youth United for Climate Crisis Action), and an organizer with Walk the Talk Santa Fe. 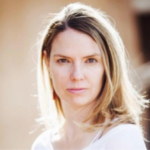 Sylvia Johnson is a third culture kid who was born in Bolivia and raised in six different countries in the Americas.  She splits her time as Creative Director between Free Roaming Studios, a small film production company dedicated to visual storytelling to inspire action, and the Santa Fe Dreamers Project, a non-profit immigration legal services organization. Sylvia is a Fulbright Scholar, a National Geographic Explorer, and an organizer for racial equity and abolition. She currently leads the Prison Divest New Mexico coalition – a campaign to divest New Mexico educational institutions from private prisons. 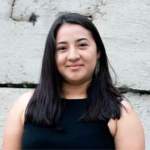 Kemely Gomez is a Guatemalan-born studio artist who currently lives and works in Santa Fe, NM. She immigrated to the United States at the age of twelve along with her mother and younger sister. Gomez’s studio practice includes sculpture, painting, performance, and installation art, which focuses on themes of memory, absence, and displacement.  Her work is influenced by her childhood experiences in her native country and the challenges she has faced being an undocumented immigrant living in the United States. Gomez received her BFA in Studio Arts from the Santa Fe University of Art and Design in Santa Fe, New Mexico. 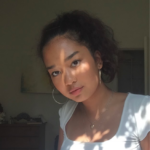 Natalia Payne is a senior at Santa Fe High School. She is interested in history, politics, culture, and how art both shapes and reflects the state of our world.  Her other passions include painting, drawing, reading and writing. 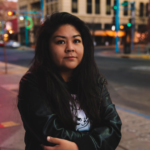 Felicia Nez is a multimedia artist working in film/digital media, text and imagery. Her films explore Indigenous humor, creating new narratives, and highlight the perseverance and resilience of the Indgenous spirit. Appointed as a participant for Sundance Film Festival’s 2015 screenwriting workshops, and as a 2019 Digital Media Intern for The Smithsonian’s National Museum of the American Indian, she continues to refine her work. Recently,  Nez has turned her focus to the world of creative writing and to using text as imagery. Nez strives to find new and innovative ways to display and share art in isolated Native communities. 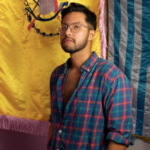 Martín Wannam (b. 1992, Guatemala) received his MFA in Photography from the University of New Mexico (2020), a diploma in contemporary photography from La Fototeca (2016) and BA in graphic design from the Universidad Rafael Landivar (2015). Wannam works utilizes photography, performance, and sculpture to disrupt the meaning of religion, folklore, and western beauty standards. Through the critical lenses of gender, sexuality, and race he challenges his own cultural background and deconstructs and disrupts the hegemony of religion as his own gesture of political resistance.

In June 2020, SITE invited artists to consider the following questions or themes when creating their 2D work:

Each participating artist picked up a blank 5.5 x 11 inch postcard, protective sleeve, and artist registration form from a designated box outside of SITE’s building. Submissions were limited to 1-2 works per person. We wanted to make the process as seamless and contactless as possible to reinforce our Covid-19 safety precautions.

WHEN:
Beginning June 8, 2020, blank postcards were available for pick up outside of SITE’s front entrance Mondays through Fridays, from 11:30 am – 2:30 pm while supplies lasted. If an artist was unable to pick up/drop off from SITE, our staff worked with them to make other arrangements.

All completed works were to be 2D, dry, and placed with registration form in original sleeve delivered back to SITE by July 31, 2020. A designated box were placed outside of SITE’s front entrance to receive completed works Mondays through Fridays, from 11:30 am – 2:30 pm from June 30 through July 31, 2020. Designs were to utilize the front of the postcard only so every artwork could be used as a functional postcard. IN ORDER TO BE CONSIDERED FOR THE BILLBOARD PROJECT, SUBMISSIONS MUST BE HORIZONTAL IN ORIENTATION.