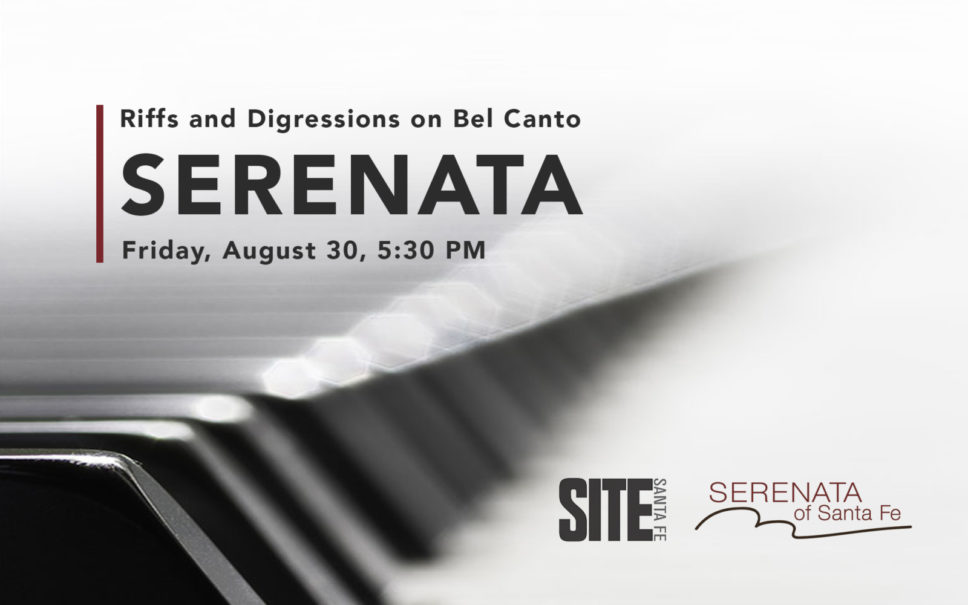 Where Only the Stars Can Hear Us – songs of Franz Schubert

Come enjoy the first concert in the Serenata of Santa Fe’s“Riffs & Digressions” series, presented at SITE Santa Fe. This concert features Karim Sulayman, tenor and Yi-heng Yang, piano, who will perform“Where Only the Stars Can Hear Us” – songs of Franz Schubert.

Lebanese-American tenor Karim Sulayman has garnered international attention as a sophisticated and versatile artist, consistently praised for his sensitive and intelligent musicianship, riveting stage presence, and beautiful voice. A 2019 GRAMMY® Award winner, he regularly performs on the world’s stages in orchestral concerts and opera, as well as in recital and chamber music, while forging a standout path in the music of the Italian Baroque.

A native of Chicago, Karim’s musical education began with violin studies at age 3.  He spent years as a boy alto the Chicago Children’s Choir and was hand selected by Sir Georg Solti and Leonard Slatkin as a soloist with the Chicago Symphony Orchestra and the St. Louis Symphony.  He graduated with highest honors from the Eastman School of Music where he worked in the Collegium Musicum under the tutelage of Paul O’Dette, and earned a Masters degree from Rice University. He later moved to Paris, France where he studied with renowned tenor/haute-contre, Howard Crook.  He also studied improvisation at the Second City Training Center in Chicago.

Highlights this season include his debut at Stockholm’s Drottningholms Slottsteater as Claudio Monteverdi in the world premiere of Syskonen i Mantua, his role debut as Nerone in Monteverdi’s L’incoronazione di Poppeawith Florentine Opera, and concerts of Frank London’s “Ghetto Songs” at Hamburg’s Elbphilharmonie and at Teatro Goldoni in Venice. Last season, he made his Australian debut as Testo in Monteverdi’s Il Combattimento di Tancredi e Clorindawith the Australian Brandenburg Orchestra, his debut with the National Symphony at the Kennedy Center in Messiah, his title role debut in Monteverdi’s L’Orfeowith Apollo’s Fire on a US national tour, and his Chicago Symphony Orchestra debut (this time as a tenor!) in Bernstein’s Mass.

In 2017, he created the role of Albert in the world premiere of Laura Kaminsky’s Some Light Emergesfor Houston Grand Opera. He has also appeared with Boston Lyric Opera, Chicago Opera Theater and New York City Opera. Other highlights include appearances at Lincoln Center, the Kennedy Center, the International Bach Festival, and the Aldeburgh Festival, and collaborations with such conductors as Harry Bicket, Marin Alsop, Jane Glover, Helmuth Rilling, Yves Abel and Robert Spano. As a passionate advocate of new music, he has performed world premieres at Carnegie Hall, the Casals Festival and the Aspen Music Festival.

A dedicated chamber musician, Sulayman was a frequent participant at the Marlboro Music Festival under the direction of and in collaboration with pianists Mitsuko Uchida and Richard Goode. He has since been presented by many leading chamber music festivals and in 2017, he appeared in concerts of French chamber works at the Roman River Festival in the UK which were recorded and aired by BBC Radio 3.

His growing discography includes his debut solo album, Songs of Orpheus, which was released in April 2018 to international acclaim on the AVIE label. Named “Critic’s Choice” by Opera News, and praised for his “lucid, velvety tenor and pop-star charisma” by BBC Music Magazine, the album debuted at #5 on the Billboard Traditional Classical Chart and #3 on the iTunes Classical Chart, and was recently honored with the GRAMMY® Award for Best Classical Solo Vocal Album. He has also recorded the title role in Handel’s Acis and Galateawith Mercury Baroque, two releases for NAXOS in works of Grétry and Philidor, Apollo’s Fire’s Sephardic Journeyon AVIE, and an album of 21st-century chamber works, Piercing are the Darts, on the Furious Artisans label. He is also featured in the ARTE documentary Leonard Bernstein – A Genius Divided, which premiered throughout Europe in the summer of 2018 and will subsequently be released on DVD.

Additionally, Karim created a social experiment/performance art piece called I Trust You, designed to build bridges in a divided political climate. A video versionof this experiment went “viral” on the internet, and was honored as a prizewinner in the My Hero Film Festival. He has been invited to give talks and hold open forums with student and adult groups about inclusion, empathy, healing from racism, and activism through the arts.

As a guest soloist and collaborator, she performs frequently with groups such as The Sebastians, The Knights, and The Raritan Chamber Players. Her debut album of Mendelssohn violin sonatas on period instruments (Olde Focus) with Abby Karr garnered critical praise, and upcoming releases include the Brahms cello sonatas (Deux-Elles), on period instruments, with Kate Bennett Wadsworth. Her album 18th-century fortepiano-harpsichord duos with Rebecca Cypess, “Sisters, Face-to-Face: The Bach Legacy in Women’s Hands (ACIS),” won the 2018 AMS Noah Greenberg Award for contributions to historical performance.

Ms. Yang holds a doctorate in piano from the Juilliard School, and studied there with Robert McDonald, Julian Martin, and Veda Kaplinsky. She studied fortepiano with Audrey Axinn, and with Stanley Hoogland at the Amsterdam Conservatory. She has received grants from The Mustard Seed Foundation’s Harvey Fellowship, and The Dutch Ministry of Culture’s Huygens Award. Ms. Yang is on the piano faculty at The Juilliard School Evening Division and Pre-College. She also teaches fortepiano and piano literature at The Mannes School of Music, and Nineteenth-Century performance practice at Rutgers University.

‘Alone with the Water and the Night’ – Schubert Lieder

‘Migration and Complex Stories’ – Original music and stories of displacement and homeland.

“Sound, as a medium, aesthetically allows us to experience environment as connections between living things, cycles, and rhythms.”