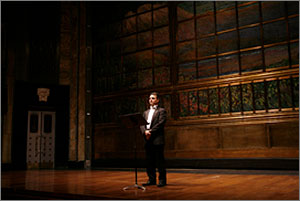 Pablo Helguera works in unusual formats, ranging from experimental symposiums, phonograph recordings, exhibition audio-guides, publications, or nomadic museums. Helguera often investigates the very nature of art production, its perception, and the role that art making and culture in general plays in politics and society. He often combines literary and musical strategies as well as pedagogy and education theory. One of his most well-known projects is The School of PanamericanUnrest, an artist-led, not-for-profit public art project initiated in 2003 that seeks to generate connections between the different regions of the Americas through discussions, performances, screenings, and short-term and long-term collaborations between organizations and individuals. Its main component was a nomadic forum or think-tank that will cross the hemisphere by land, from Anchorage, Alaska, to Ushuaia, Argentina, in Tierra del Fuego.

Helguera has presented his performative work at various institutions including the Museum of Modern Art, New York and at the Royal College of Art, London, and in various biennials such as the 8th Havana Biennial, San Juan’s Polygraphic Triennial (2004) and PERFORMA 05, New York’s first performance art biennial. In 2010 he was appointed pedagogical curator of the 8th Mercosul Biennial in Porto Alegre,Brazil (2011).

As cultural promoter and educator, Helguera has worked for over 15 years in US museums. He is currently the Director of Adult and Academic Programs at the Museum of Modern Art in New York. Prior to that, he was thehead of public programs at the Solomon R. Guggenheim Museum (1998-2005), and as part of his museum career, he has organized close to 1000 public events in conjunction with nearly 100 exhibitions.

Pablo Helguera was born in Mexico City in 1971 and lives in New York City. His work is represented by Enrique Guerrero Gallery in Mexico City.