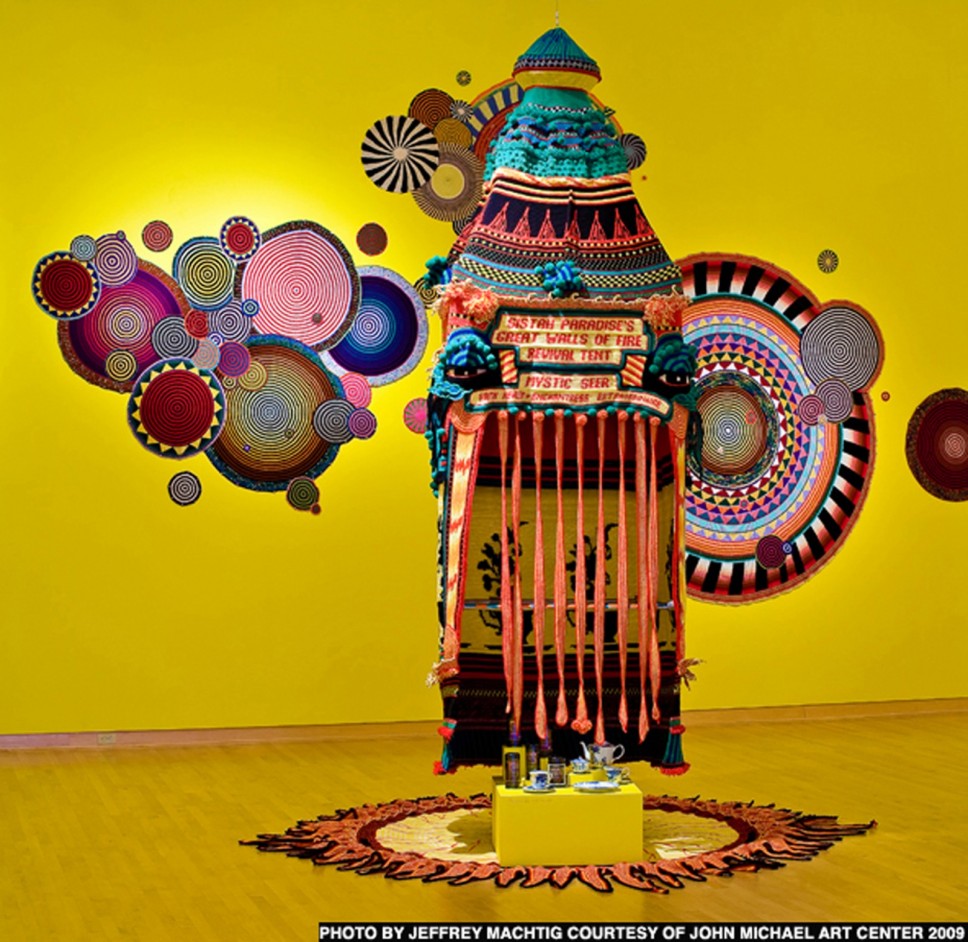 My Life in Art/SITE Center: Xenobia Bailey with Tammi Lawson

Xenobia Bailey studied ethnomusicology at the University of Washington. It was there that her interest in the beauty and craftsmanship of the musical instruments and headdresses and garments of the High Court’s sparked her interest in cultural practices and material culture. She worked as a costume designer for the renowned African-American community theater, Black Arts West, until her acceptance into Pratt Institute in Brooklyn in 1974. She received her BA in industrial design while she learned to crochet under needle artist, Bernadette Sonona, after which she began to create and sell colorful, original hand sculpted crocheted hats inspired by distinctly ornate African-American braided hairstyles.
Bailey is best known for her eclectic full size crochet tents, hats and large scale crochet mandalas, consisting of colorful concentric circles and repeating patterns. Her pieces are often connected to her ongoing project “Paradise Under Reconstruction in the Aesthetic of Funk”. Her designs draw influences from Africa, China, and Native American and Eastern philosophies, with undertones of the 1970’s funk aesthetic. Her hats have been featured in United Colors of Beneton Ads, on The Cosby Show, and in the Spike Lee film Do the Right Thing (worn by Samuel L. Jackson as DJ Mister Señor Love Daddy).
Bailey has been artist-in-residence at the Studio Museum in Harlem, the Society for Contemporary Craft in Pittsburgh, and the Marie Walsh Sharpe Art Foundation in New York City. Her work has been exhibited at the Studio Museum in Harlem, the Jersey City Museum, the New Museum of Contemporary Art, and the High Museum of Art in Atlanta. Her work is in the permanent collections at Harlem’s Schomberg Center for Research in Black Culture, the Allentown Art Museum, the Museum of Contemporary Arts, and the Museum of Arts and Design.

Tammi Lawson is Associate Curator of the Art & Artifacts Division at the New York Public Library’s renowned Schomburg Center for Research in Black Culture. The collection she oversees was born during the iconic Harlem Renaissance of the 1920s and today houses approximately 15,000 works of fine art and artifacts that reflect the history and expressive culture of the African Diaspora.

The items conserved within Lawson’s division range from Fine Art (paintings and sculpture); African Art (regional drawings, sculpture, masks); works on paper; textiles; and important representations of ephemeral and material culture. Lawson has advised and supported the scholars and curators who visit the collection to research and prepare articles, books, catalogs, and exhibitions focused upon black art and artists. As a curator, she collaborated on the Schomburg exhibition Curators’ Choice: Black Life Matters.

Lawson is a graduate of the City of New York Public University. She holds a B.A. from the College of Staten Island and a Master’s Degree in Information and Library Science from Queens College in New York.