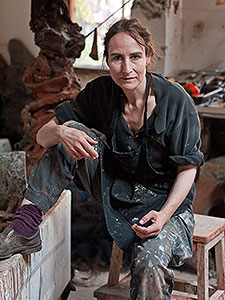 Iris Häussler’s narrative installations, which range from the sweeping to the succinct, revolve around fictitious histories, including her work featured in More Real? Each project begins with a detailed biography of an invented character which Häussler drafts with a novelist’s eye for detail. She then builds objects or environments that her characters might have used or made, and opens them to the public. Her best-known projects, The Legacy of Joseph Wagenbach (2006) and He Named Her Amber (2008–10), were elaborately theatrical, often unsettling environments in which viewers were guided through displays of sculpture purportedly created by characters named Joseph Wagenbach and Mary O’Shea.

Because Häussler is interested in the distinctions between fiction and reality, she does not immediately reveal to viewers that her installations are artworks. On the contrary, she goes to great lengths to ensure that they first experience her historical fictions as truth (later, through various means, she reveals their actual status). The entire process raises issues of authorship, artistic intention, and the constantly shifting boundaries between art and life.

Born in Germany and trained as a sculptor, Häussler now lives in Toronto. Her work has been the subject of a number of solo exhibitions, most notably at the Art Gallery of Ontario, and the 18th Sydney Biennale, as well as group exhibitions in this country and abroad. She is represented by Daniel Faria Gallery in Toronto. For more information, please visit www.haeussler.ca