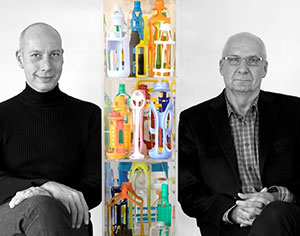 Garth Clark and Mark Del Vecchio are life and business partners celebrating 33 years together and are considered the leading experts on modern ceramics today. They founded the Garth Clark Gallery in Los Angeles in 1981, and added New York in 1983. The gallery soon became the leading space internationally for modern and contemporary ceramic art, presenting over six hundred exhibitions. Together they also ran the non-profit group Ceramic Arts Foundation that has published books, organized exhibitions and held eight major international conferences of ceramic art and criticism in Syracuse, Kansas City, London and Amsterdam. The duo has received numerous awards from the Museum of Arts and Design, New York, the Kansas City Art Institute and other institutions. Clark, the author of over sixty books, was made a Fellow of the Royal College of Art and also was the winner of 2005 Mather Award for Distinguished Art Journalism from the College Art Association.

As gallerists, scholars, authors, and collectors, Garth Clark and Mark Del Vecchio have helped shape the field of ceramics by expanding notions of the medium’s possibilities. Their esteemed collection of ceramics was given to the Museum of Fine Arts, Houston in 2007, and is the subject of a 500-page comprehensive catalogue published this year by Yale University Press. Clark has just competed two new books, Mind Mud: Ai Weiwei’s Conceptual Ceramics and Lucio Fontana Ceramics.