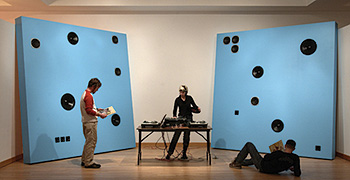 Join us for Clash Class: Salvation Sound a collaborative performance event hosted by Biennial artist Nadine Robinson (a.k.a. NayRob), featuring deejay and vocalist Treasure Don and his crew, as they experiment with electronic sound and human movement inspired by the Jamaican sound system. A vanguard approach to music-making, the Jamaican sound system produced the now ubiquitous remix; it served as a blueprint for underground raves and fostered the collaborations between deejays and crews. Robinson considers the Jamaican sound system an important point of departure for her work. This mode of sound production is based on the interactions that occur between “human actors and the mechanical systems of musical amplification, including turntables, audio electronics, and speakers.”1

As a group-based musical act, Clash Class reflects Lucky Number Seven’s guiding principles of collaboration, experimentation, ephemerality, and newly commissioned work. Robinson’s work and her performance is a complex anomaly of the secular and the religious through her choice of musical styles which range from roots to rock, and from reggae to Gregorian chants.