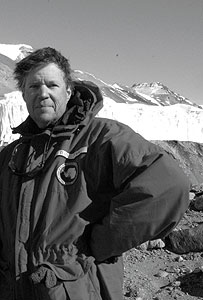 Art of the Anthropocene

In September, SITE will host Willliam L. Fox, a writer, independent scholar, and poet whose work is a sustained inquiry into how human cognition transforms land into landscape. Fox is currently the director of the Center for Art + Environment at the Nevada Museum of Art and will present a talk entitled Art of the Anthropocene.

Fox’s talk will draw a line from Alexander von Humboldt (a German naturalist and explorer) and Frederic Church (a 19th-Century American landscape painter in the Hudson River School) through the Mid-Twentieth Century New Topographics and Earthworks. Then, he will discuss the definition of the Anthropocene and the development of what we know as Land Arts. The Anthropocene begins in the 1790s when the burning of fossil fuels began to create a global signature, a strata of residue from greenhouses gases that marks when humans became the most pervasive geomorphological force on the planet. The beginning of the era was also marked by the birth of Earth systems science, and a concurrent evolution in the artistic representation of the planet from landscape art to land art, from making pictures of the land to using land itself and our own effects on the earth to make art.

In the summer and fall of 2009, a group of New Mexico arts organizations will collaborate to present LAND/ART, focusing on land and environmental art www.landartnm.org. SITE Santa Fe will present a series of cutting-edge lectures that include leading artists and scholars in the land arts movement.