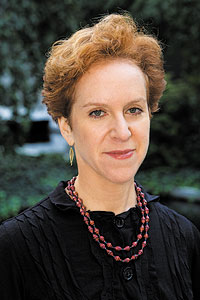 Ann Temkin is the The Marie-Josée and Henry Kravis Chief Curator of Painting and Sculpture at The Museum of Modern Art, New York. In addition to the forthcoming exhibition, Gabriel Orozco, which will travel to the Kunstmuseum Basel, Tate Modern, the Musée national d’art moderne, and Centre Pompidou, Paris, she has organized the exhibitions Color Chart: Reinventing Color, 1950 to Today (2008), Projects 83: Monika Sosnowska (2006), Against the Grain: Contemporary Art from the Edward R. Broida Collection(2006), and Contemporary Voices: Works from the UBS Art Collection (2005). She was the Muriel and Philip Berman Curator of Modern and Contemporary Art at the Philadelphia Museum of Art from 1990 through 2003. Her exhibitions and catalogues include Christian Marclay: The Bell and the Glass (2004),Barnett Newman (2002), Alice Neel (2000-2001), Raymond Pettibon (1998), Joseph Cornell / Marcel Duchamp … in resonance (1998), Constantin Brancusi (1995), and Thinking is Form: The Drawings of Joseph Beuys (1993). Ms. Temkin has written for periodicals including Artforum, Art in America, ARTnews, and Grand Street, and has contributed essays to numerous books and catalogues, including Roni Horn aka Roni Horn (Tate Modern and the Whitney Museum of American Art, forthcoming, 2009), Palermo(Kunsthalle Düsseldorf, 2007), A Modern Patronage (The Menil Collection, 2007), Eva Hesse (San Francisco Museum of Modern Art, 2002), Robert Gober (Walker Art Center, 1999), and Mortality/Immortality? The Legacy of 20th Century Art (The Getty Conservation Institute, 1999). She received her B.A. from Harvard University and her Ph.D. from Yale University and is a trustee of the Association of Art Museum Curators.

Laura Steward is the Phillips Director of SITE Santa Fe.

My Life in Art: Ann Temkin with Laura Steward