SITE’s Eighth International Biennial will examine the recent emergence of film and video as an animated platform through which to integrate other media – painting, drawing and sculpture – a development they see as strongly related to the filmic concept of the “dissolve,” in which one shot fades into another. Organized by Sarah Lewis and Daniel Belasco, The Dissolve will offer insight into this fast-moving development and will also feature new commissionsn from innovators of the medium juxtaposed with key examples of early animations. To address the spatial demands of the constantly shifting nature of video, the curators have commissioned renowned architect David Adjaye to reinterpret the iconic environments through which the moving image is experienced – from the nickelodeon to the arena-like interior of contemporary movie theaters to the internet.

The curators will present their concept and plans for the exhibition in their lecture.

Sarah Lewis is a writer, curator, and critic at Yale University School of Art and a doctoral candidate at Yale University in the Department of the History of Art. After receiving degrees from Harvard University and Oxford University, she held curatorial positions at The Museum of Modern Art, New York in The Department of Photography and The Department of Painting and Sculpture, and is a guest curator for exhibitions at the Woodruff Arts Center and the Wadsworth Athenaeum. Sarah has published widely, writing for Art in America, P.S.1 Contemporary Art Center, The Venice Biennial, The Smithsonian Institute National Museum of African American History and Culture, The Studio Museum in Harlem, and The Guggenheim Museum. A member of President Obama’s Art Policy Committee, Sarah lives in New York and New Haven. 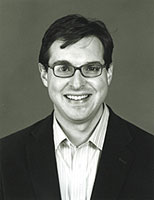 Daniel Belasco is a curator and art historian specializing in postwar and contemporary art and design. He is the Henry J. Leir Assistant Curator at The Jewish Museum, New York, where his exhibition Reinventing Ritual, opened in September 2009 and will travel to the Contemporary Jewish Museum, San Francisco. Daniel has contributed texts to several contemporary art catalogues, including Robert Storr’s Disparities and Deformations: Our Grotesque for SITE Santa Fe’s Fifth International Biennial. Daniel has published essays and reviews in numerous journals including Art in America and Art News, and is currently completing a book on feminist consciousness in New York School art.