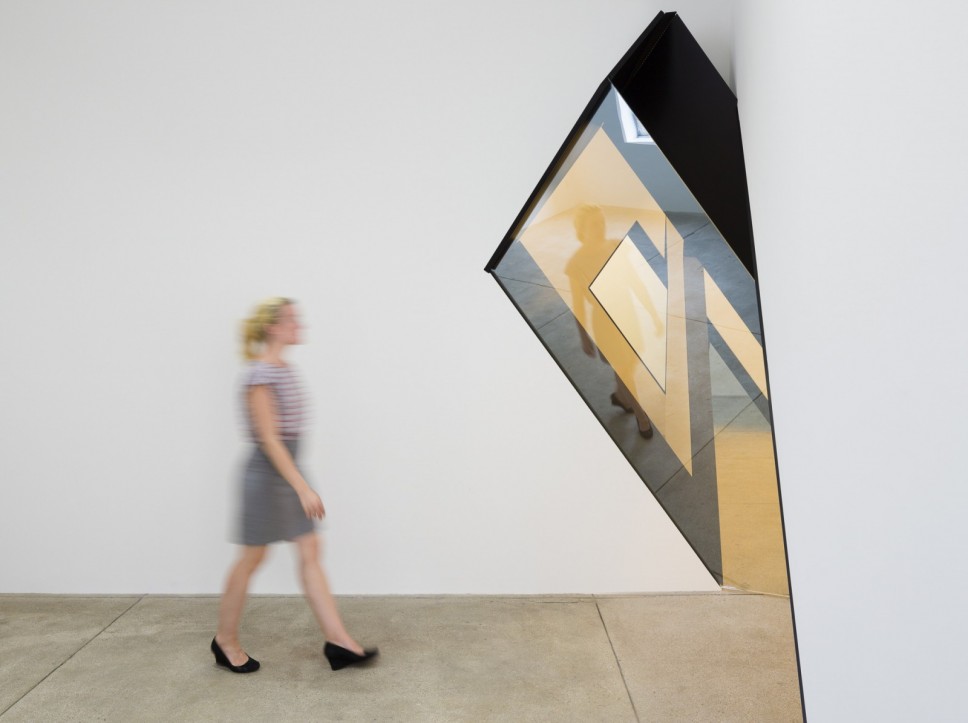 The second of three artists exhibiting at SITE in the Unsuspected Possibilities show, Sarah Oppenheimer delights in creating architectural interventions that force viewers to contemplate optical illusions, the nature of space, and their own relationship with the built environment. Modifying existing structures with mirrors, glass, and aluminum, her work demands that audience members interact: step through portals, gaze into holes, and orient themselves around each piece to see how changing perspective alters the view. Revealing the intellectual basis of her work, Oppenheimer remarks, “A moving person is a critical measure in establishing what can be perceived. A person’s progression through a space informs the understanding of the given space’s layout and shapes their short-term memory. This short-term memory in turn informs all perceptual experience.” By interfering with our preconceptions of architecture, Oppenheimer’s art is at once elegant, bewildering, and eye opening.

Sarah Oppenheimer was born in Austin, Texas and is currently based in New York City. She received her BA in Semiotics from Brown University, and went on to earn her MFA in painting from Yale University in 1999. Her work has been exhibited at institutions such as The Drawing Center, the Mattress Factory, the Rice Museum of Art, Sculpture Center, the Queens Museum of Art, the St. Louis Art Museum, Skulpturens Hus, and the Baltimore Museum of Art. She has received many awards, including the Rome Prize Fellowship in 2010-11 and the 2007 Guggenheim Foundation Fellowship.

For SITE’s Unsuspected Possibilities exhibition, curated by Janet Dees, Oppenheimer will present new installations responding and corresponding to those of fellow artists Leonardo Drew and Marie Watt. The exhibition will be on view from July 18 – October 25, 2015 at SITE Santa Fe.