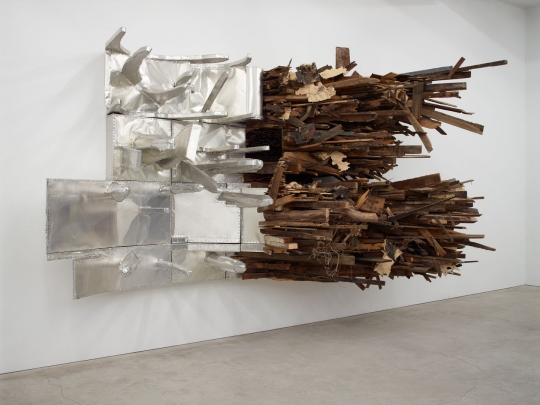 One of three artists featured in the upcoming Unsuspected Possibilities exhibition at SITE Santa Fe, Leonardo Drew creates monumental sculptures rich in abstract meaning. He works with an aesthetic of urban debris, using materials such as wood, cotton, nails, rope, rags, and animal remains. Some of these materials are found as trash, others purchased and treated with an aging process, recycled and warped to fit his vision. Drew creates work with personal meaning, reflecting his personal history and his heritage as a black male artist. However, his sculptures also leave immense space for subjective interpretation due to the near-universal qualities of his media: themes of life and death, birth and rebirth, are just waiting to be discovered in Drew’s crowded grids of everyday materials. “It’s not important that you include my take on life or even my experiences,” he cautions. “The works themselves should act as mirrors.”

Born in Tallahassee and raised in a Bridgeport, Connecticut housing project, Drew was exhibiting works by the time he was 13 years old. He earned his BFA from the Cooper Union in 1985 and has since gone on to show his work at venues such as the Hirschorn Museum in Washington D.C., the San Diego Museum of Contemporary Art, the Madison Art Center in Wisconsin, the Miami Art Museum, the St. Louis Art Museum, and the Royal Hibernian Academy in Dublin.

For SITE’s Unsuspected Possibilities exhibition, curated by Janet Dees, Drew will present new installations responding and corresponding to those of fellow artists Sarah Oppenheimer and Marie Watt. The exhibition will be on view from July 18 – October 25, 2015 at SITE Santa Fe.